I have been ruminating for this past month on how to begin the Craig Augustine Photography blog. The fear of making grammatical mistakes, posting uninteresting subject matter or simply discovering that I am a bore was preventing any forward movement.  As a trained and experienced commercial advertising photographer, I am consciously, or unconsciously visually influenced by my immediate surroundings;  if I allow myself to be.  Therein lies a lesson to myself, again.
Sometimes, I am asked why I am a photographer. Words alone might explain, a theory formulated from what I have read,  learned or watched;  but I think relaying a real life experience, a job, out in the field will help answer the question more effectively.
Earlier this year, I was given an assignment to capture an image depicting the concept  TIMELESS.  I formulated a few ideas that involved staged scenes,  my 86 year old mother and an old TV set.  Then, one cold, grey morning, I was driving a familiar route around town here in Appleton, Wisconsin and I passed one of my favorite buildings;  a Gothic style Lutheran church with tall stained glass windows, visible from the street. I have photographed this church before. The results were nice, but lifeless;  an image of an old church. (convert it to black and white, put it in a ready made frame and you have art to hang in the hallway).  As I drove back around again,  I had an idea:  Same scene – add a person.  I roughly visualized it:  winter, local historic church, stain glass windows, maybe a priest/Rabbi/Shaman  (or the little guy with the sticks on his back, hunched over, from the cover  art of the Led Zeppelin 1v album!)
I was inspired and called my dear friend Fr. Patrick and explained the project.  He agreed to be the “timeless walker” in his winter clerical garments.   I went back to the location and noted specifics:  angles, time of day, potential obstacles like parked cars or road signs, phone lines, etc.)

Planning my lighting for a shot is where the fun begins.  With today’s portable battery powered speed lights, I can shoot almost anywhere and bring controllable light into virtually any scene.  Not that long ago, I remember doing a photo shoot for our studio Christmas card.  The process involved driving around looking at farmer’s fields in November, knocking on the owner’s door to get permission to use the barren, cold, snow covered field, transporting a large cut Christmas tree to the center of the field, anchoring it into the snow, bringing out a gas powered generator to power lights for the tree and a shoe box sized White Lightning strobe light.  This was ridiculously labor intensive and yes, before Photoshop was widely used.

Prior to the shoot date, I charged all my Nickel-cadmium batteries.  There are 14 AA batteries per light!  (4 for the actual SB 900 speed light, 8 for the SD-9 add on external battery pack and 2 for the Pocket Wizard wireless radio slave transceiver, Flex TT5).  I will talk more about my equipment in a later post.

The envisioned  final image was to be simple, graphic, a little majestic with the windows looming in the background.  The image would transcend time and be indistinguishable  in period and place.  Patrick would be in there, somewhere, walking.  On the day of the shoot, a blizzard blew in from the northwest.  High winds, sideways snow and bitter cold had a grip on northeast Wisconsin.  I checked with Patrick and he confirmed his commitment to walk for me. 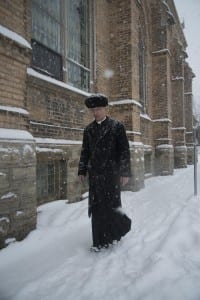 When we arrived at the church, I unloaded one SB 900 speed light with battery pack and radio slave ready to go on the light stand.  (It is much easier and much more pleasant to set that up  ahead of time in the warmth of your studio rather than under the hatchback of your vehicle in the blowing cold.)  I anchored it in a desired snowbank.  All equipment was sheathed in plastic to protect it from the moisture.  My camera was set at iso 500  f/ 5.0    1/1600 sec shutter speed. Auto white balance.  I had the speed light in front of Patrick and just out of frame. I was utilizing the hi  speed synch capabilities of my Nikon D800 DSLR. ( shooting at a faster shutter speed that 250 sec).  I hand held my camera with the pocket wizard mini tt1 trigger unit mounted on the camera’s hot shoe to set off my speed light anchored in the snowbank. 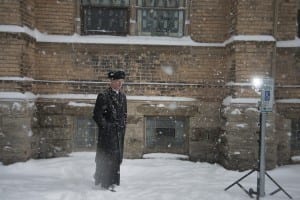 Find the light- hide the light!

The scene evolved through a number of takes where Patrick walked at me, left of the light, right of the light.  My frame orientation was horizontal, angled,  I panned with him, with the snow flakes;  and finally, I recognized, in the viewfinder, a close proximity to what I envisioned  a week ago while driving around:  A tall horizontal frame with Patrick on the right side walking toward the subtle light ahead of him.  I snapped about 8 frames before I told him to put his hat on.  3 more frames taken;  and then the little button batteries in the Pocket Wizard radio transceivers stopped working.  That happens in the cold weather. (Keep extras in a warm pocket if you are out longer than 20 minutes in the cold).  I felt I had what I needed and called it a wrap.  We were out for a total of 23 minutes. 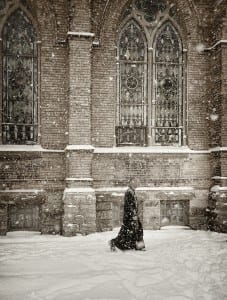 no hat- no good 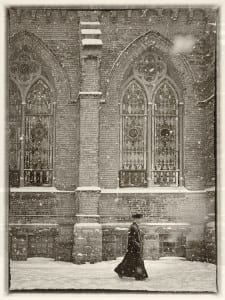 Hat – good. Something is missing, hmm…

In viewing the raw files on my monitor, back in my digital studio,  a variable that I did not see in the viewfinder as I was shooting, was the positioning of the snowflakes in relation to the subject.  I lucked out and had one that cleared him with most of the other preferred elements in place.   I edited the files and chose the final to work with. I’m glad I took a few shots with his hat on before the batteries died.  The image I chose possessed everything I wanted except one thing…the carefree romance of  forward movement.  It was clear Fr. Patrick was walking, but he needed something more.  In Photoshop I used the lasso tool and selected a lower section of his cloak, warped it in free transform and moved it up to make a blowing scarf.  That is what he needed!  I ran the whole image through a light dose of Nik ‘s  High-dynamic-range imaging software, converted the scene to black and white  with  a touch of sepia tone.   I then applied  a distressed boarder to enhance the antiquity of the overall scene…    St. Stephan’s Cathedral, Vienna, Austria,  circa  1908  OR  Zion Evangelical Lutheran,  Appleton, WI  2013 ?? 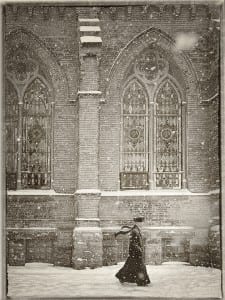