That is a Huge Sandwich!

This past summer has been busy with a variety of photoshoots for new client’s and old. Perhaps no project has yielded the high visibility as redoing the imagery for the Quaker Bakery trucks here in Appleton. If you live here you probably have seen them. 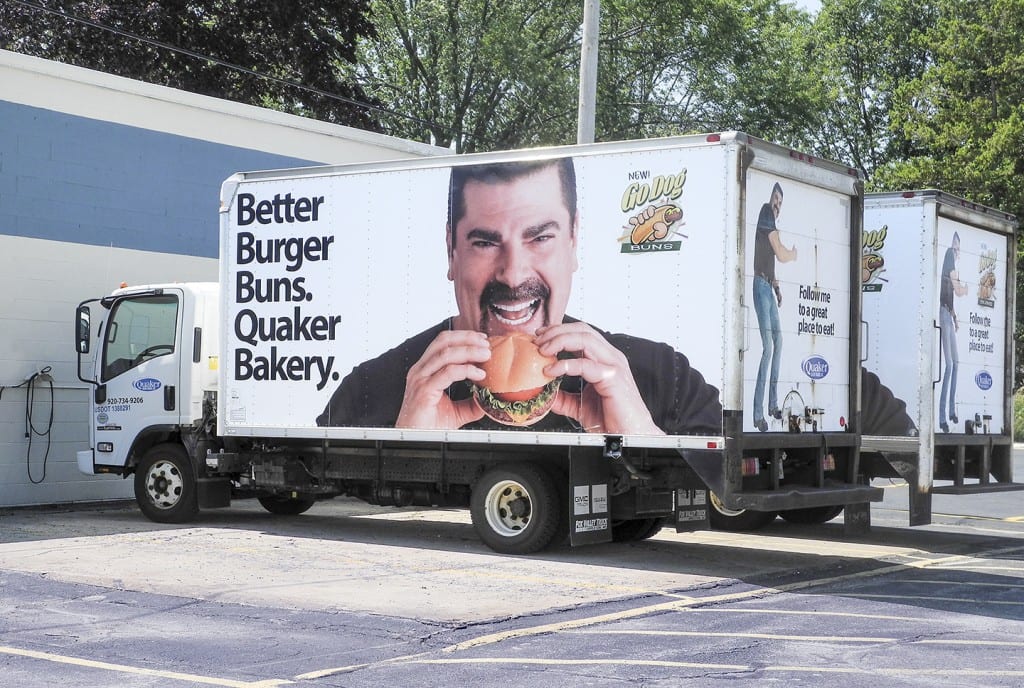 I received a call from Tom Smith, a veteran of the sales team there at Quaker on Mason Street and Wisconsin Ave.   He wanted to see what was to be involved to replace the imagery on 2 small trucks and one large truck.   He had models lined up, 3 children of employees.  We talked about the scene:  3 kids in combined, unreserved amazement over the size and superiority of an enormous sub sandwich.  The side text on the truck was to be determined.   Not having to find models was a timesaver however a food stylist was a necessity. The hero (no pun intended) of this shot was the sandwich.  The kids were the all important human supporting cast.  It will be a team effort all the way around.

Another crucial element was working with the files to produce the large graphics after the photoshoot.  I got in touch with Bob, over at RJ Marx Custom Graphics in Appleton and ran the whole concept by him.  This sort of work, removing old graphics from vehicles and sizing, printing and applying the new ones is what they do.  No sweat.

My food stylist , Ken Hall was called next.  I worked with Ken on a 2 day shoot for Ornua Ingredients North America in Hilbert, WI where we shot many, many images of cheese and the various things that can be done with it, including a huge sub sandwich! 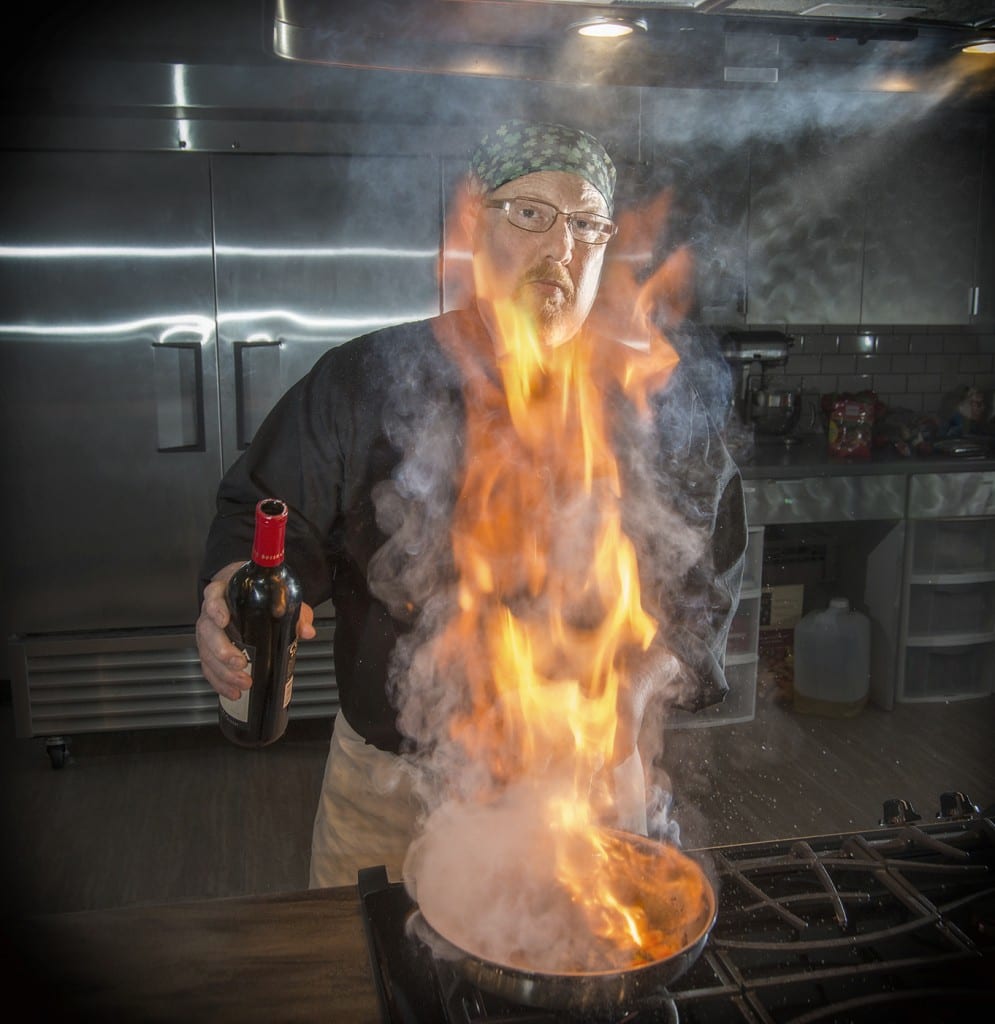 Ken was on board.  I had my team:  the models and their mothers, the food stylist, the graphics company and 2 assistants.

We arrived on the appointed date early in the morning.  We shot at the Quaker facility in the back warehouse area. My 2 dedicated assistants were bursting with energy, anticipating an exciting day. 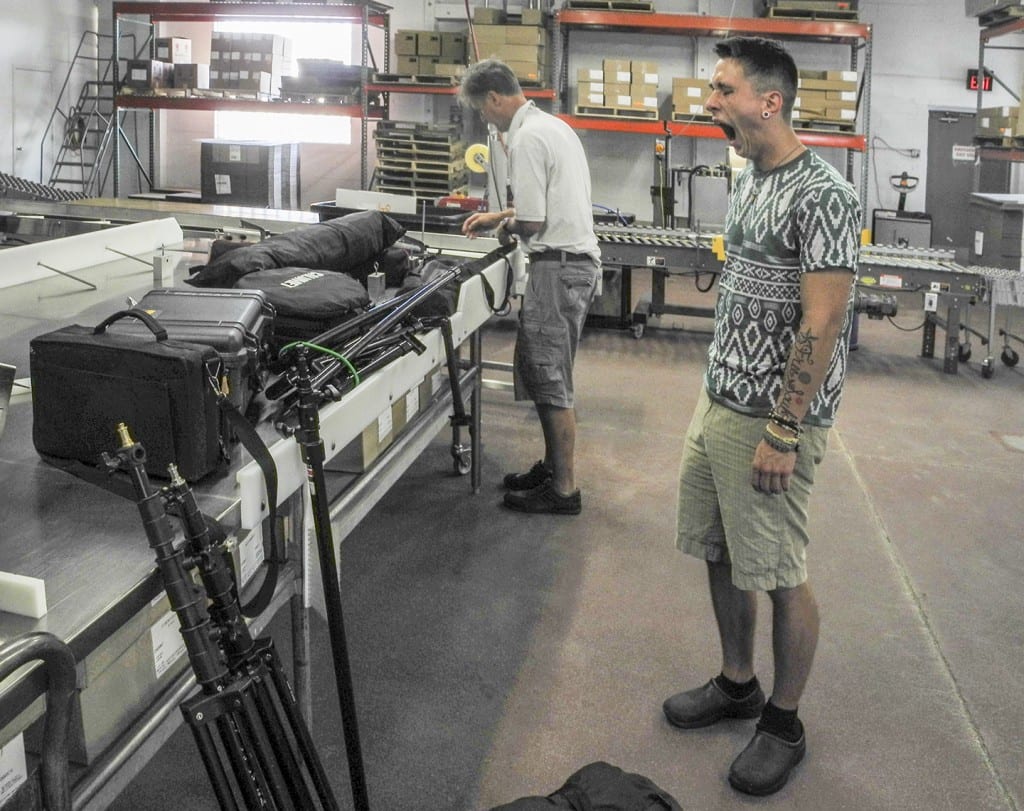 Where’s the coffee?  Henry warming up his voice for some heavy lifting.

We would need a white background for RJ Marx to drop out the figures and sandwich in post production. 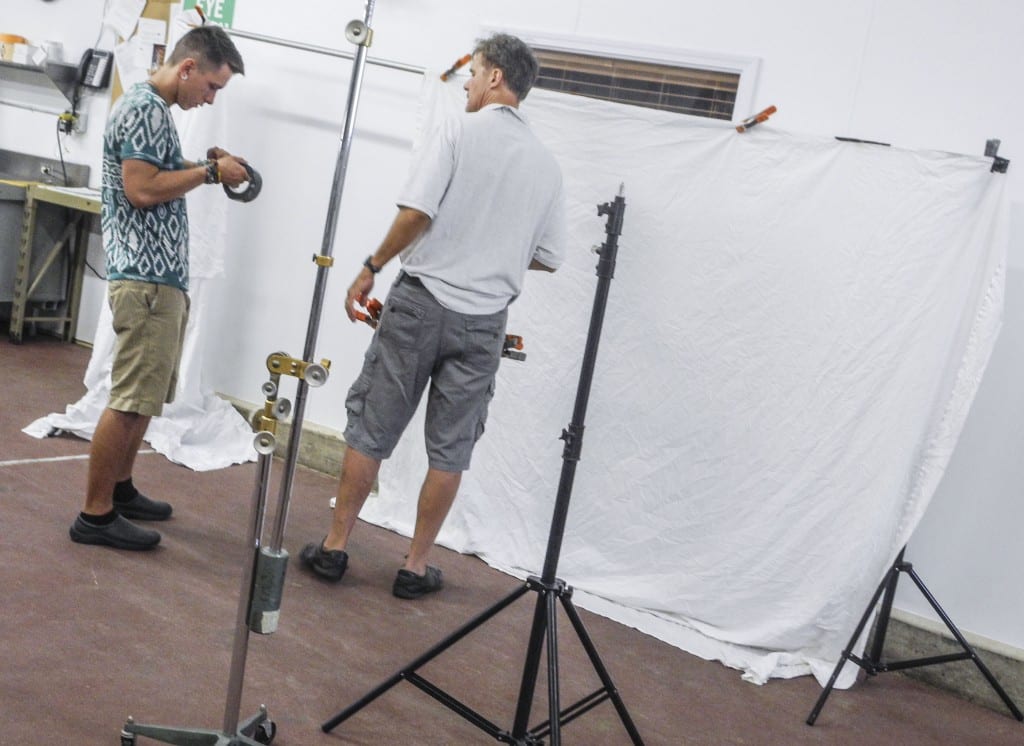 Setting up the white backdrop

I would be using a large 7 foot octobox on a boom arm extended over the scene.  It’s a two person job to set that up . 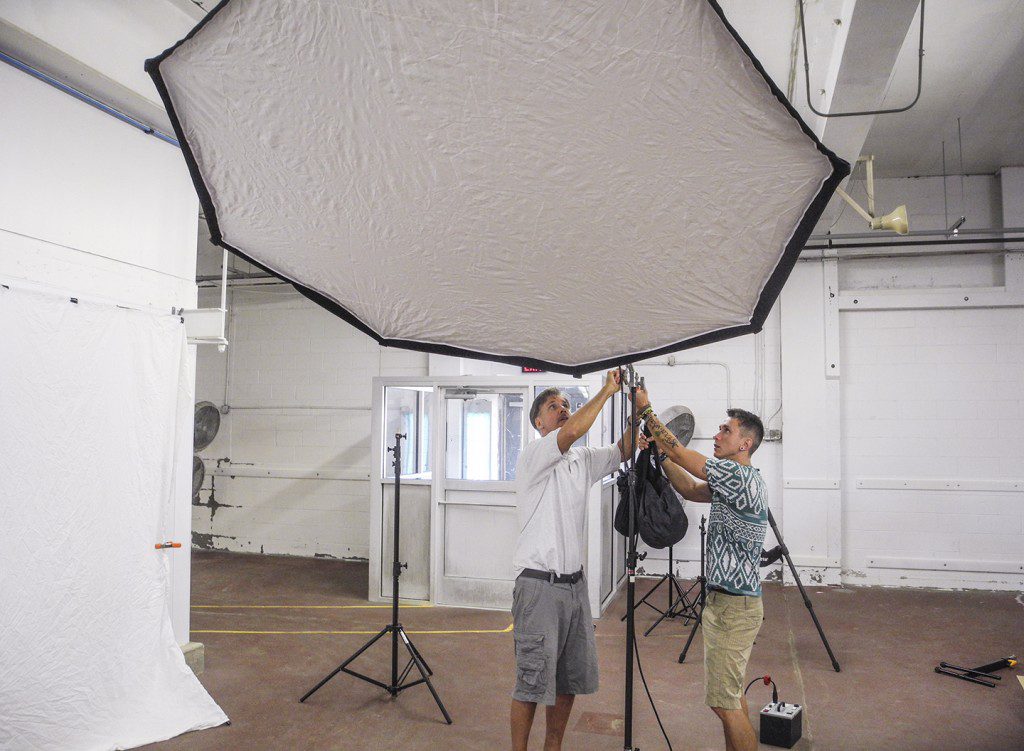 Setting up the 7 foot Octobox on a weighted boom arm.

Next we set up a small height adjustable table to old the sandwich.  Chef Ken suggested this. I think we would have been in real trouble had we not done this and let the kids actually hold the sandwich! 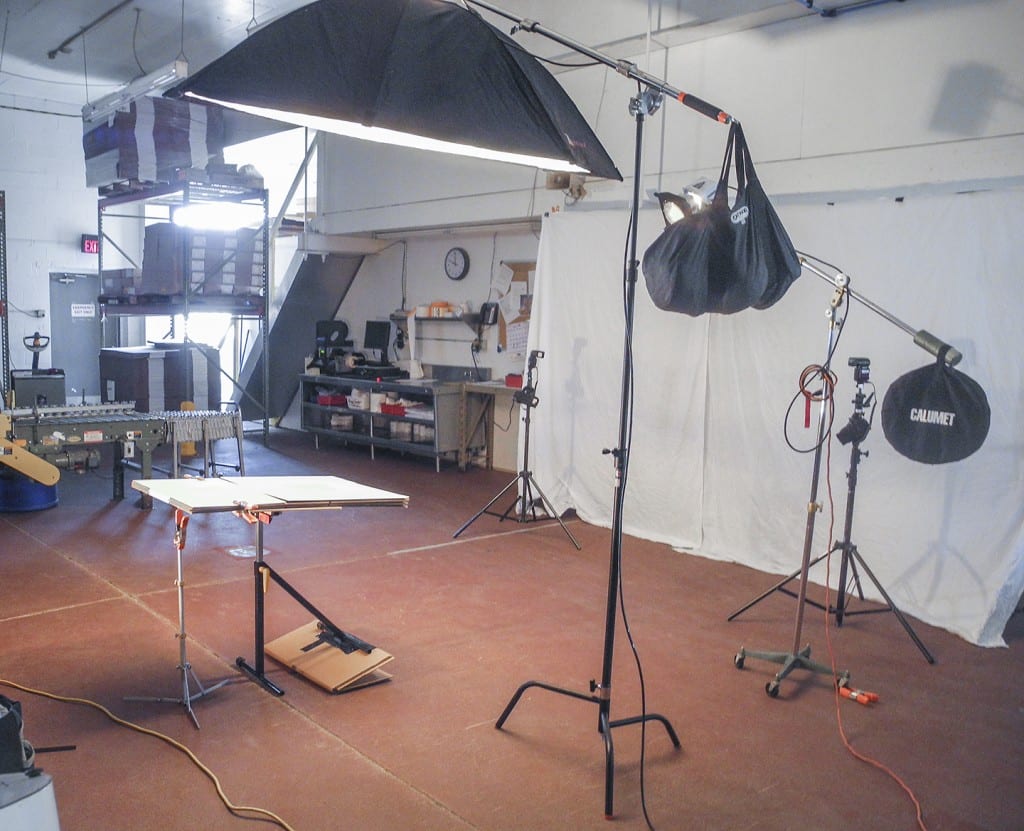 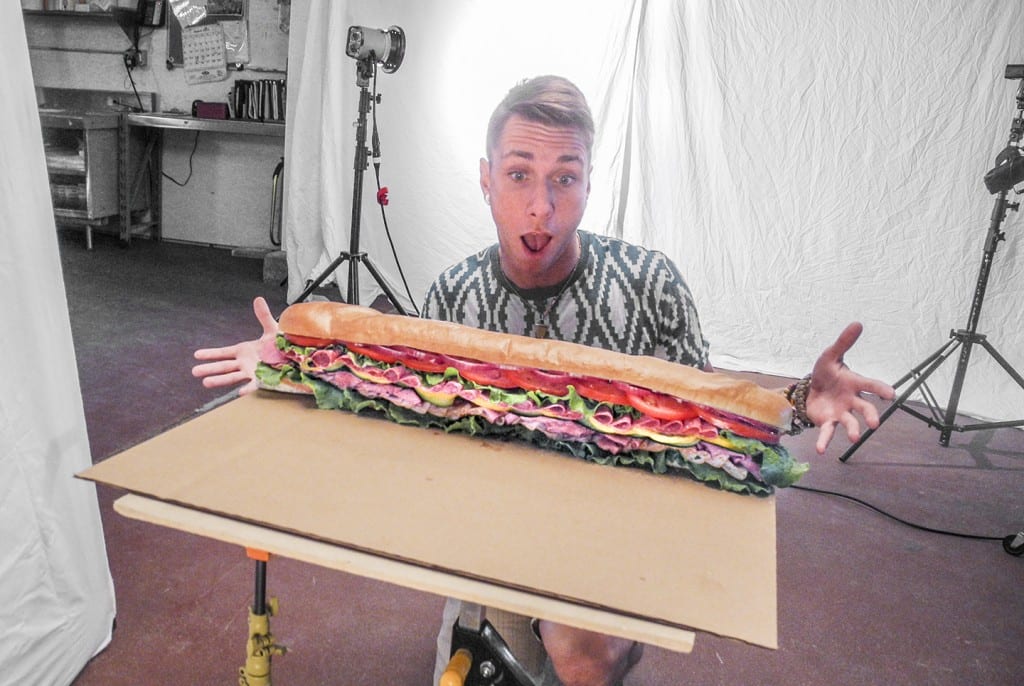 I then positioned the models in the requested order, one by one… 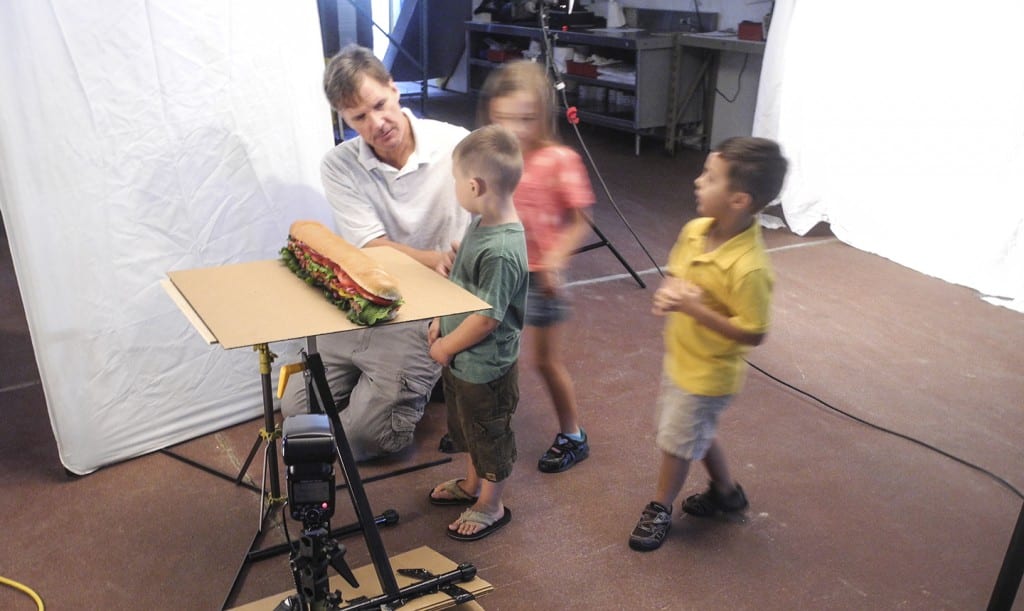 Placing my models around the trophy sub.

When working with children, there is a window of opportunity.  That means after about 20 minutes one of us will be most likely promising  milkshakes, candy, a trip to the petting zoo followed by lunch at Chucky Cheese.  One time I heard a mother promise a new puppy. ( That doesn’t happen often.) I anticipated the difference in attention spans we as adults have (all the production people who are on set trying to get this in one shot) and the kids, (who are here because their parent’s volunteered them for the project and it might be fun!)   I had a little heart to heart before we began shooting.  I told them to listen to me and no one else.  I told them that this will be fun as long as you do what I say.  I told them afterwards they can eat the sandwich.  Secretly I prayed they would hold up for at least 20 minutes with beaming smiles and astonished expressions. They seems attentive, and a little scared. 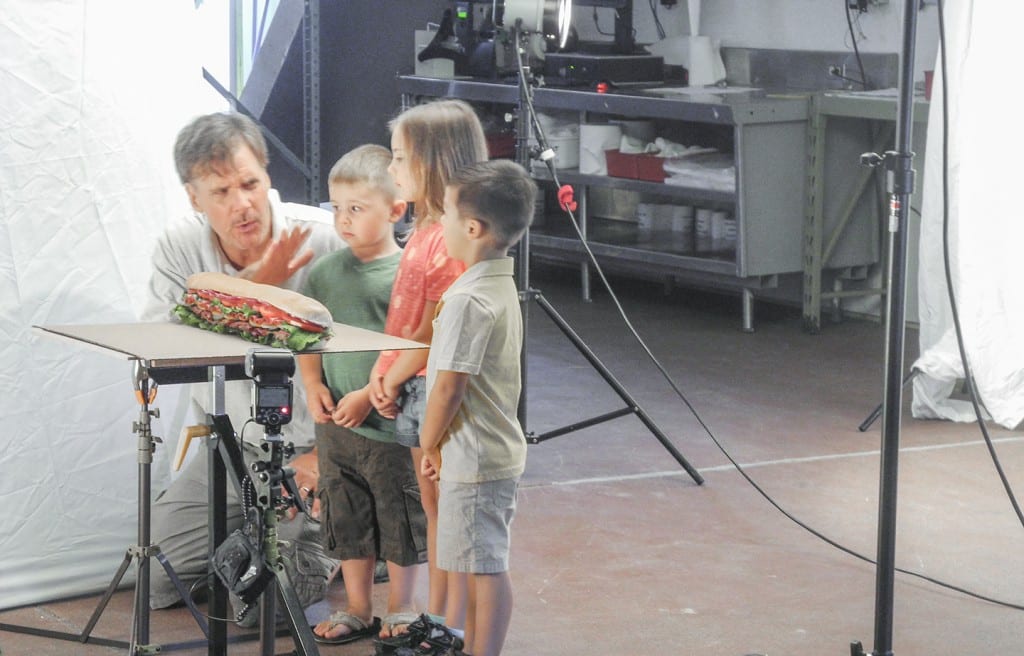 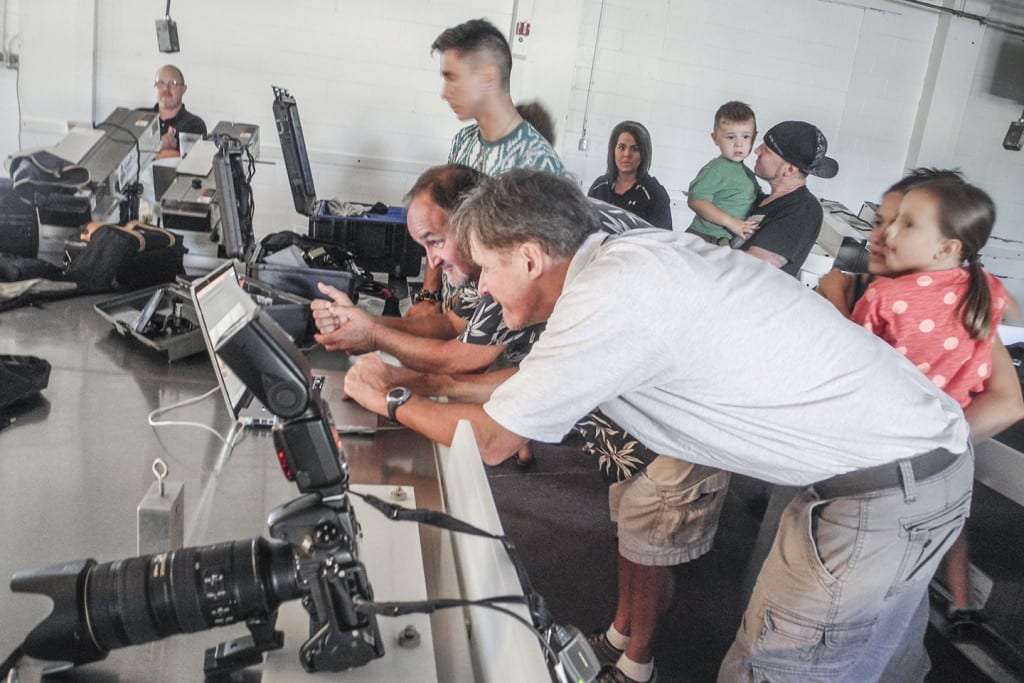 My lighting was as follows: a Dynalite  head at 16o0 W/s in the octobox for main illumination of the subjects and sandwich. I dialed it down a stop in the power variation on the power pack.  I had another Dynamite head plugged in and aimed at the white background along with portable Nikon SB900 aimed at the background as well full power.   A 1600 W/s Alien Bee as the hair light placed high and behind the main light (octobox) at about 1/2 power.   I had a low kicker light, Alien Bee 800 W/s with a small shoot through umbrella in front of the kids to fill in shadows.  I had another SB 900 zoomed in at 120mm on the sandwich’s insides and one more SB 900 shot through a large scrim on the left side of the set to add light to fill in any darker areas.

After about an hour, my models were fading.  The promises were beginning, made by mothers and fathers, “three more minutes, 5 more flashes, etc, etc”  It meant nothing to the kids.  They were done.  (Except for the little guy on the left in the green shirt, his mouth was open in astonishment for the entire hour.  At one point he looked at his dad and complained of either a sore jaw or severe cotton mouth, (or both!)  Here are just a few of the many outtakes of him.

The second frame is where he was complaining.  It was all in his eyes! He kept that mouth open just in case! 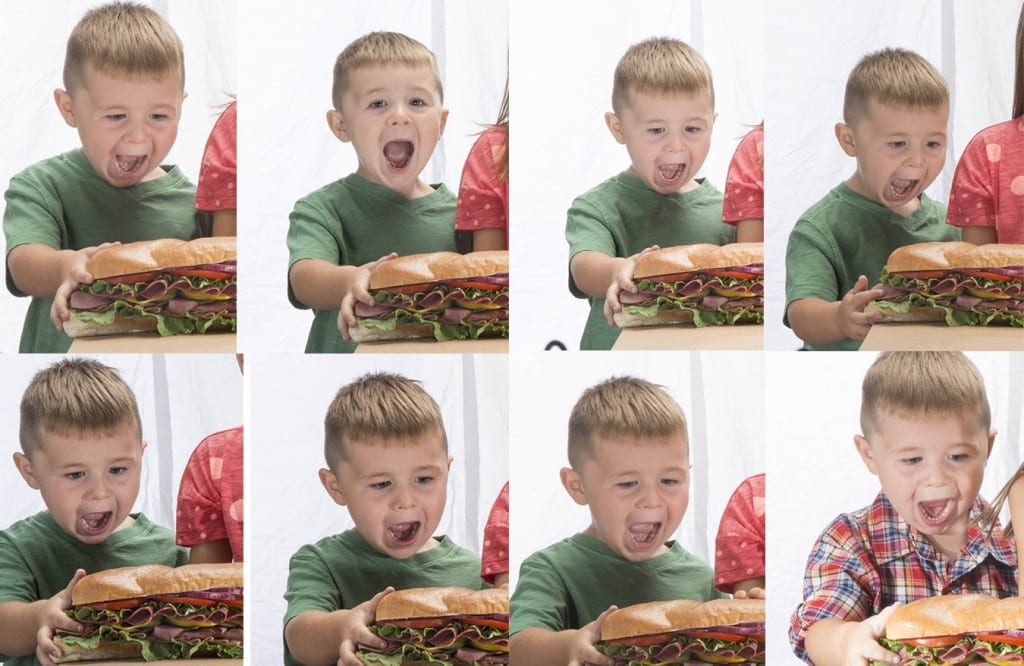 In total amazement for one solid hour.

We got what we needed and if it wasn’t in camera, then we got the raw material to construct the final scene.    The kids were done, (you can tell when they wander away from the set even with promises of the ice-cream echoing throughout the warehouse.) 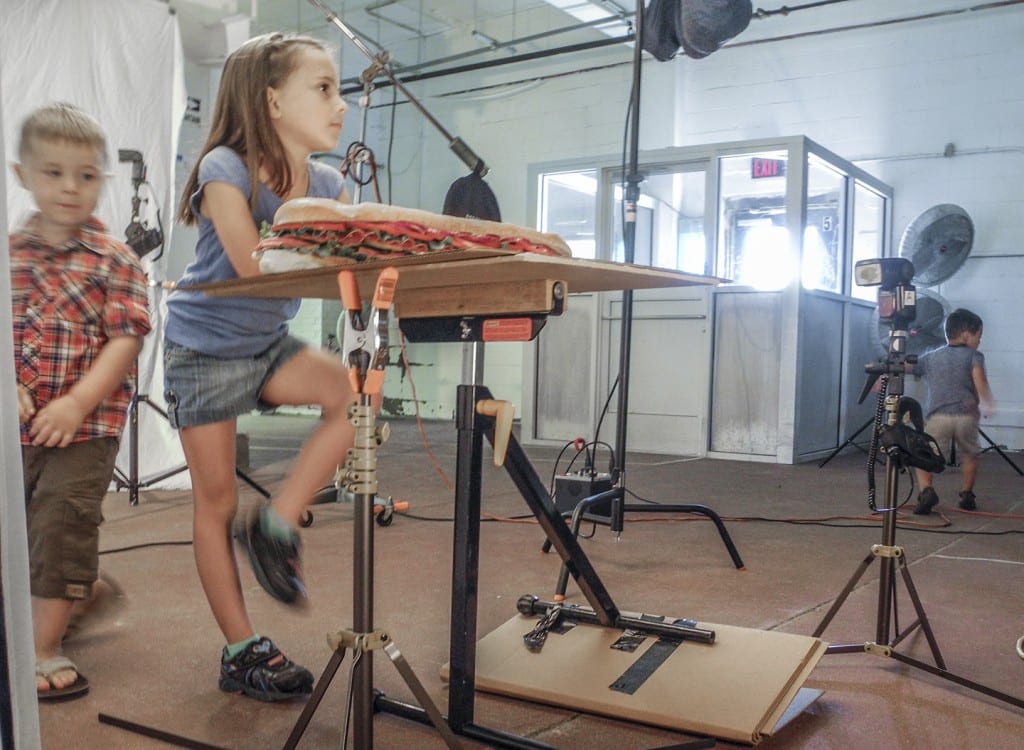 It was time to eat. 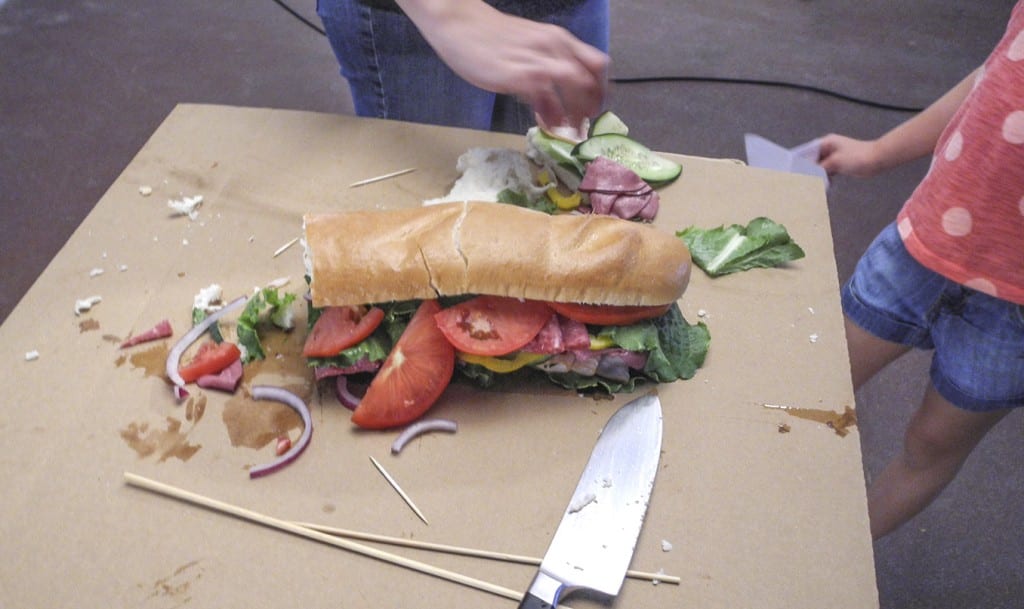 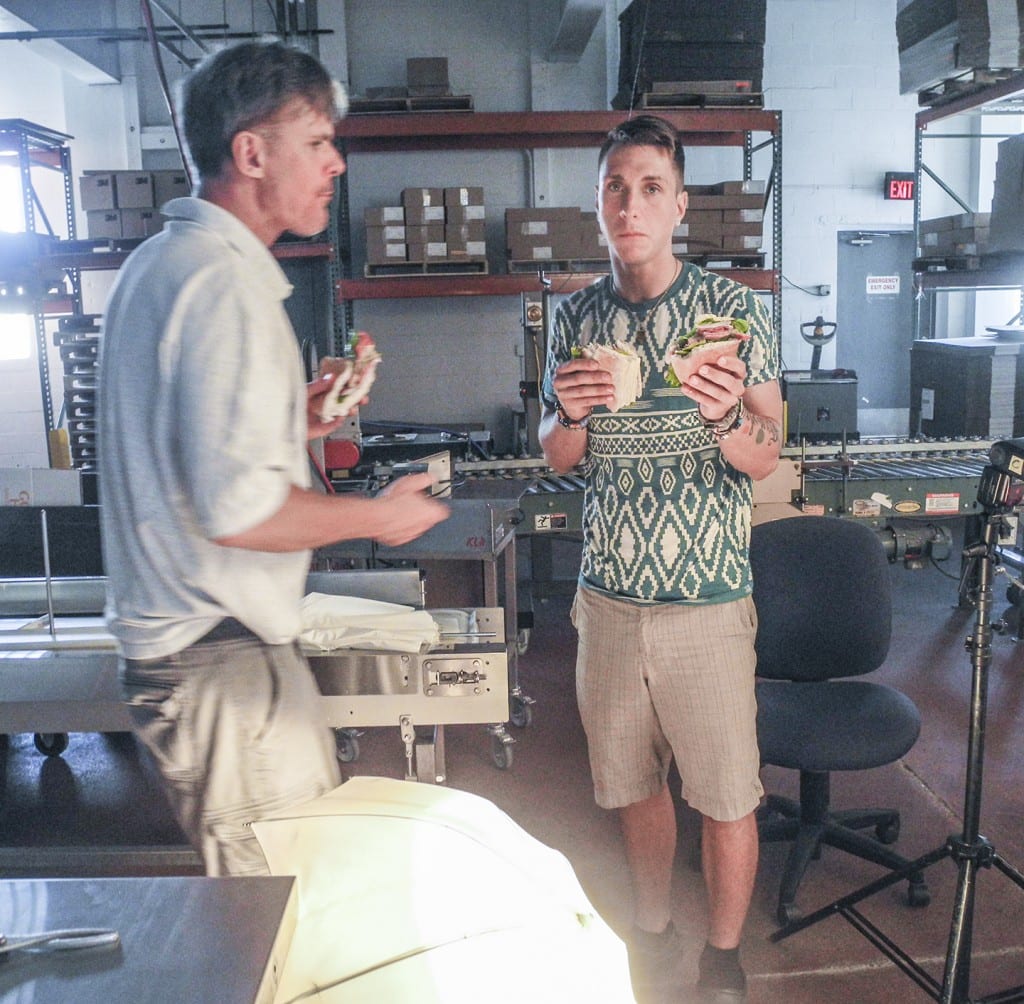 For the final, in post production,  I did a little swapping of heads from one frame to another.  I also extended the bottom of the sandwich (cloned from the top of the sandwich) and I softened any harsh shadows and logos on buttons.   Here was the submitted final approved  image to RJ Marx for their work. 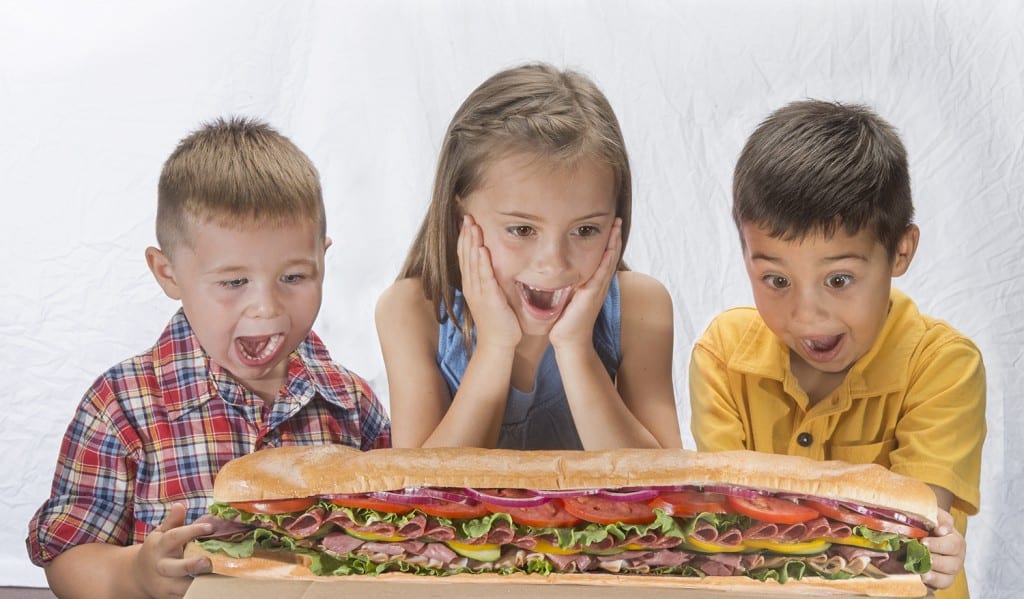 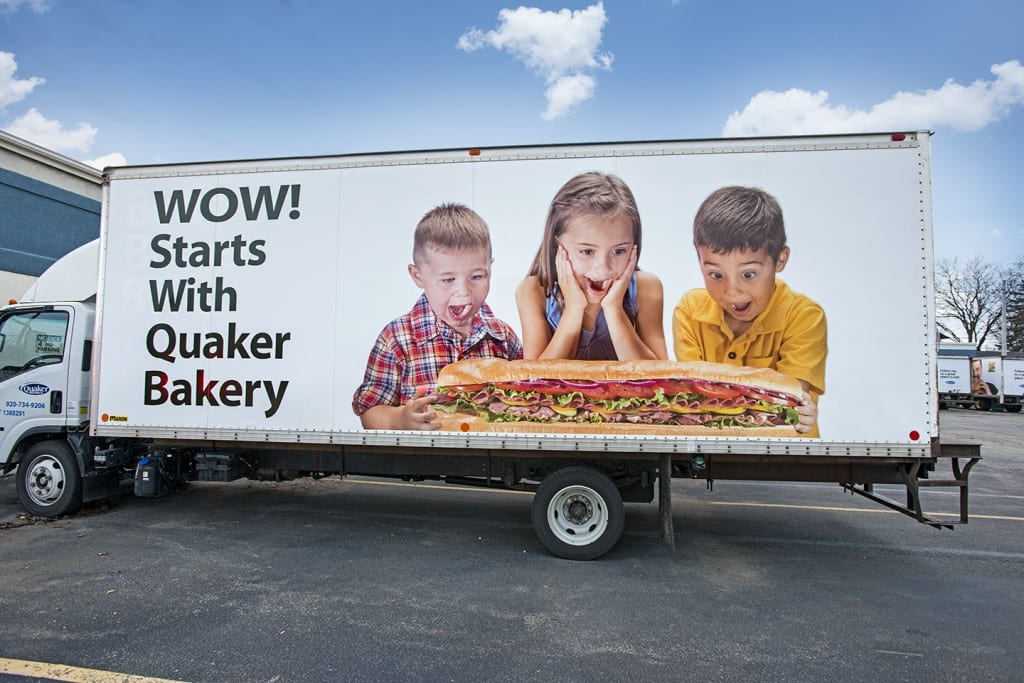 New replaced graphic on one of the trucks

I would like to thank my 2nd assistant , Caroline who took these behind the scenes images, helped load and unload, sat in on the test shots and helped with the kids. 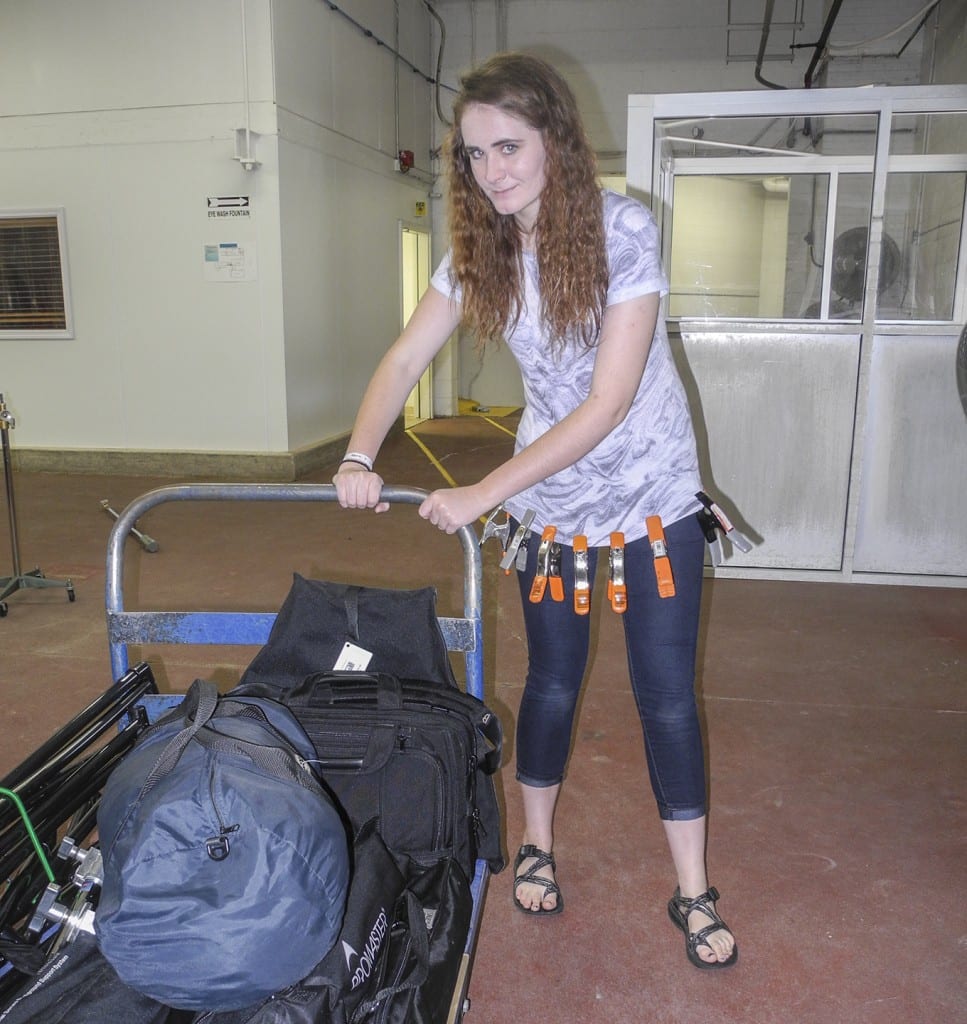 2nd assistant, Caroline showing her muscle and her creative method of transporting many A clamps.