I look at this image and remember a time when my ailing mother was yet again willing to help me out.  This time it was a modeling gig and she was happy to participate as long as we came to an agreement on compensation.  We negotiated a trip to Mary’s family restaurant for the early bird special following the photo shoot.

The concept was to illustrate “spunk” for the Fox Cites Magazine.  Many ideas were considered before I finally settled on this scenario. 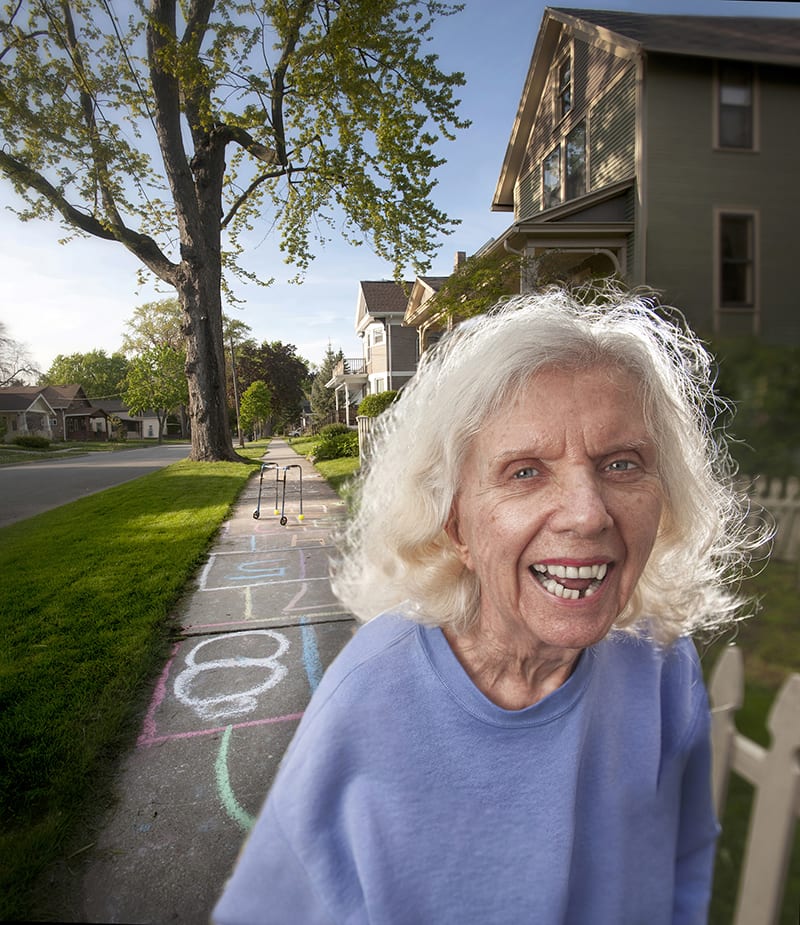 The evolution of the process began with an explanation to mom on what I wanted to do.  I made sure her schedule was clear, (it was) and gave her a 3 hour notice before we ventured outside to make the photograph.  It was a late afternoon in May.  The light was rich, casting distinct long shadows.  The neighbor girls chalked in the hopscotch grid on the sidewalk and my assistant, Caroline was today’s human light stand and elder handler. 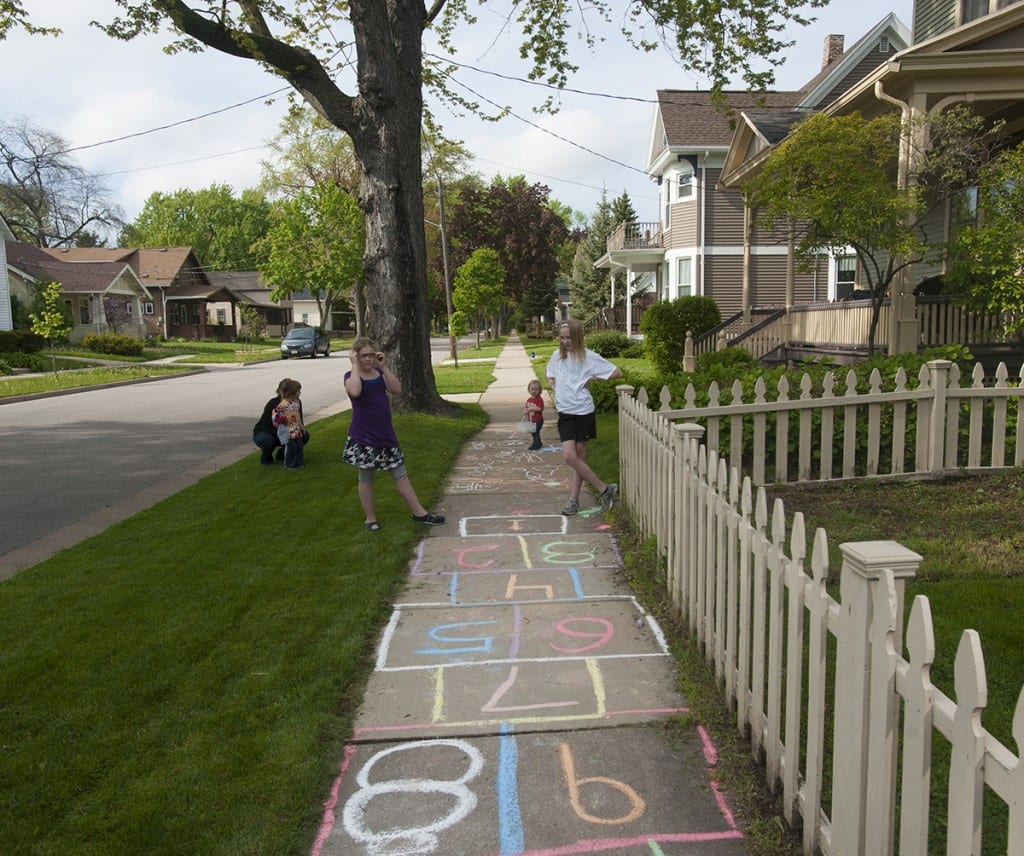 Ultimately, I wanted to capture grace and joy in spite of adversity, laced with a bit of humor if possible.  My lighting consisted of 2 Nikon SB 900 battery powered speed lights working wirelessly with my Nikon D800 DSLR.  For light modifiers, I was using a 24 inch Ezybox soft box on the main light and a 32 inch white shoot through umbrella on the other light.   I decided to utilize the high synch capabilities on my camera.  I wanted to keep the background rich and saturated with the subject well illuminated.  I was shooting at ISO 400 in manual mode with my zoom lens at 22 mm.  My F stop was 4.5 and shutter speed was a quick 1/1600th of a second.  This high shutter speed keeps the ambient light darker, rendering it rich and saturated.   My lights were blasting at full power with through the lens (TTL) spot metering to illuminate my subject.  I was not yet sure of the final cropping so I did a few variations, full length and tighter. 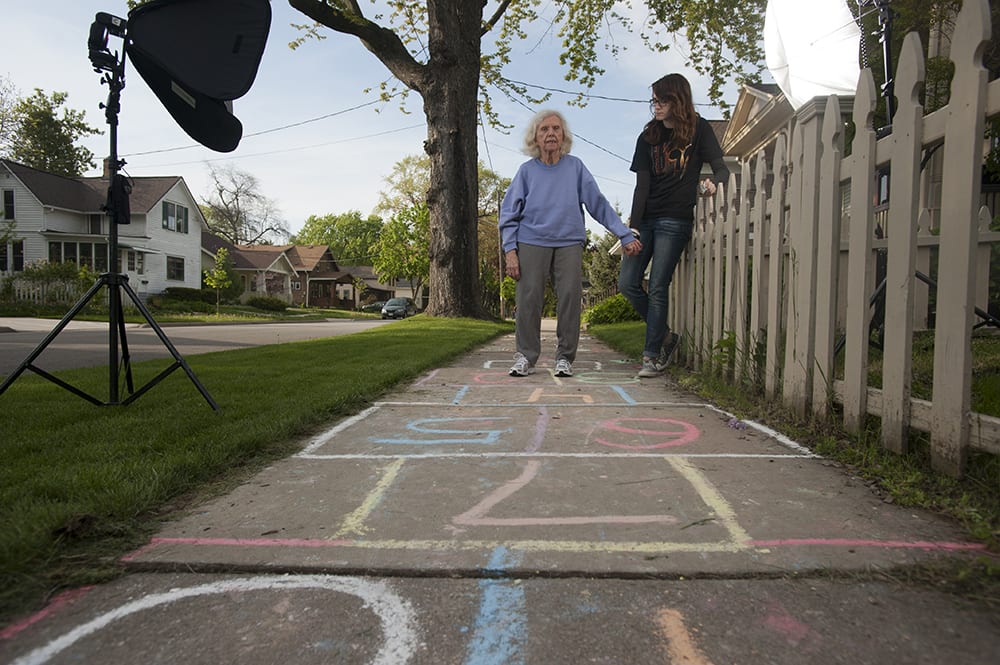 Stabilizing the model and balancing the lighting.

Considering a full length crop, I planned on combining elements from 2 images: the body posture of the main image and the section of the model’s raised left leg to depict action.  Simple standing for a short time without support was not a problem for my mother but standing on one leg without support was.  Here is a working photo of the combination of the 2 before I abandoned the idea.

I knew at this point that a tighter crop was best.  I moved in, keeping my wide angle lens on but pulling the zoom in to 20 mm.  I was getting close to what looked good to me, (or as the photographer I first worked for as an assistant at Topp Studios in NYC would say as we worked on photographing Lladro figurines:  ” You gotta wait till it start’s to sing to ya !” )  I could faintly begin to perceive a song in the breeze, albeit out of tune.

I got in close and captured a lot of expressions.  My first choice was this one because it displayed “spunk” to me.  I captured one frame. 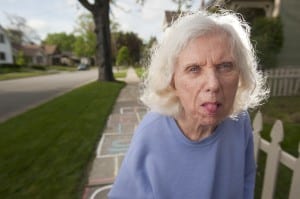 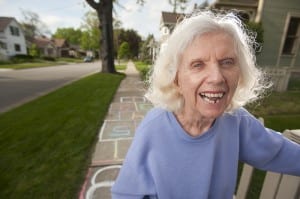 I liked this image except for the fact that the house on the right was not visible enough so I pulled back a bit and worked with a vertical frame.  I photographed the walker alone and digitally dropped it into the image. 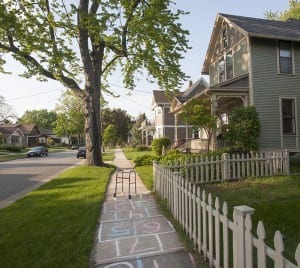 Walker shot to be digitally dropped in.

At point I knew I had what I needed on location.  In post production I removed the 2 cars in the background, bumped up the vibrance, slightly blurred the background on the right side and sharpened my mom’s face and eyes.  I also added the walker.  I submitted both versions, the nasty one and the joyous.  The consensus at the Fox Cities Magazine was :  joyous. 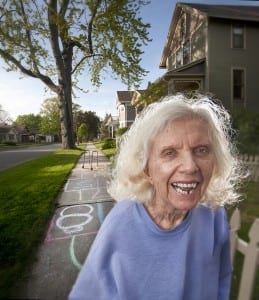 When I showed mom the final, she conveyed her approval of the overall image but graciously requested I digitally do something about her missing tooth.  I accommodated and printed her a version with all bright white teeth in tact.   Oh if real life were that easy!