Putting It All Together

I am primarily a location photographer with a studio spirit. In other words, as owner and operator of my own photography business, I try and bring the studio to my clients.  My training and employment over the years has been in various photography studios in various locations.   I miss it.  I miss having a client come onto my turf for a project where I can welcome them and move about with familiarity.  I presently operate the way I do because I decided when I went into business for myself five years ago to invest my time and energy in efficient location lighting that worked seamlessly with my cameras. It was the right decision. Having said that, when I get a project that allows me the luxury of time and space, I head to my storage unit and pull out the big guns.  A ton of rock solid studio lighting equipment from my former employer (who was kind enough to give it to me when he made the complete switch from commercial photography to trade show booth designer and purveyor) is quietly stored in a 10 x 8 foot room down the road.
Recently, that opportunity presented itself. The Chamber Event this year, celebrating excellence in business was done in an expansive space within a hotel here in Appleton, Wisconsin. There were local business superstars, young entrepreneurs, friends and colleagues all in attendance as well as a 2015 pearl white Maserati Quattroporte automobile.   All this information inspired me to work again with my Speedatron Blackline 4803 studio power pack.  It was/is the  standard in the studio and is without a doubt a well built unit.  This Speedatron set up is not something I would use as a light source for a day’s shooting in a fabricating plant fulfilling a list of  15 or 20 shots!  For this one setup, studio-like environment, it was perfect.  I also brought along the heavy weighted boom with counterweight, a couple 2400 watt second light heads to plug into the Speedatron power pack,  2 Alien Bee self contained light heads and 3 Nikon SB900 battery powered speed lights. I combined all these lights and all would be triggered optically from a master flash on the camera set to 1/4 power,(one of the SB900’s).   I used the event to exercise my studio skills and what a joy it was, once I got set up.  Here is a “behind the assistant” shot  of my setup.  Henry is documenting the lighting setup with his cellphone in case we ever want to duplicate the look. 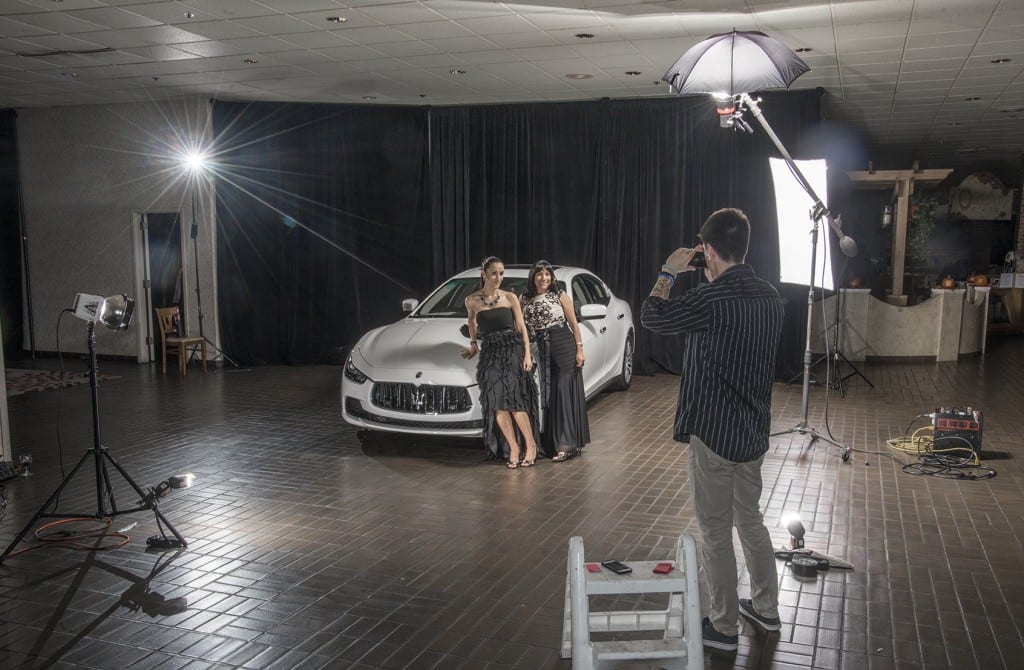 So we took a couple dozen shots like this with various revelers posing by this $100,000 car.

After the photo shoot, back at mission control, as I was reviewing the files and found a dapper gentleman that posed, under my direction, in a way that had potential for a fine image, with a little digital manipulation.  Here is that original shot. 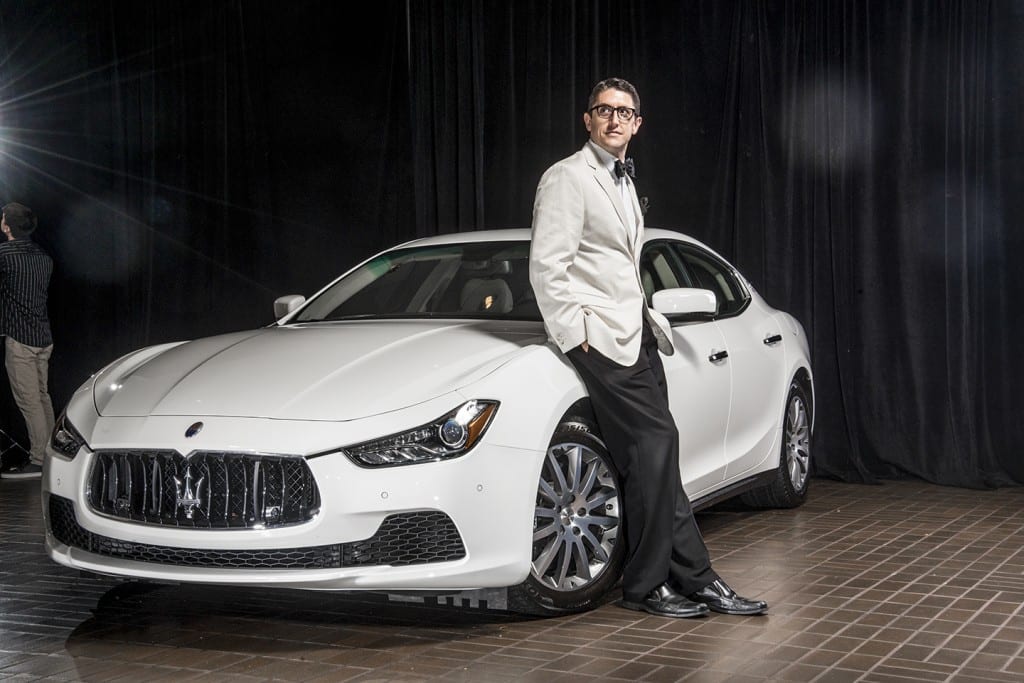 You notice assistant Henry adjusting the hair light.  I told him to bring it into the scene a bit.  See what happens next… 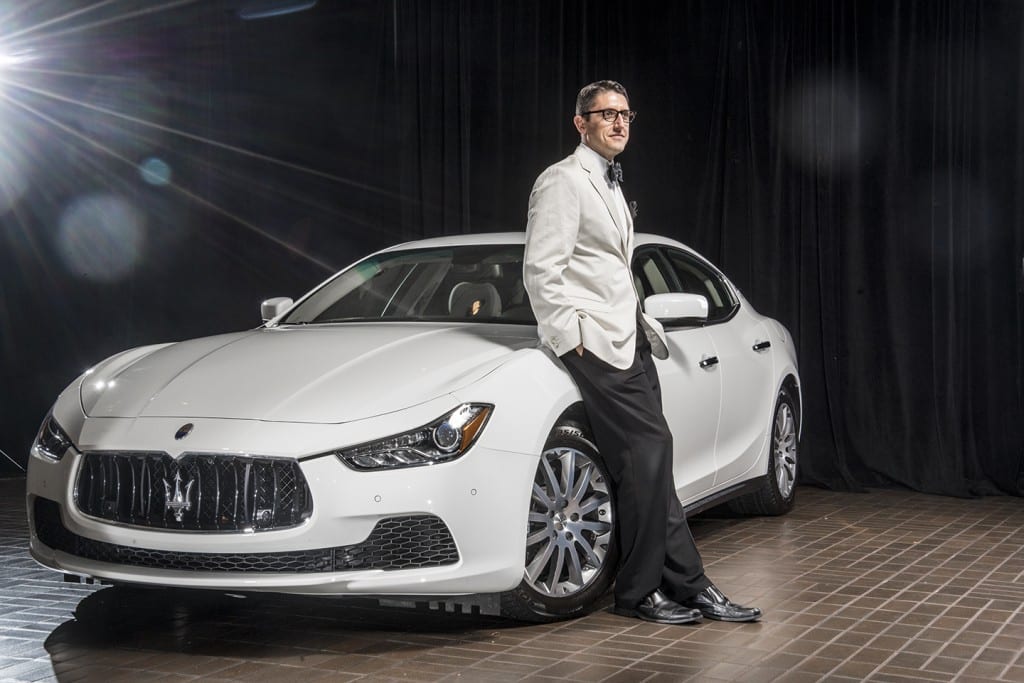 So, there it was; a nice image reminiscent maybe of 1940’s Hollywood, nice coat, bowtie, and car with the glare of glamor spilling in from the upper left.  It needed more… 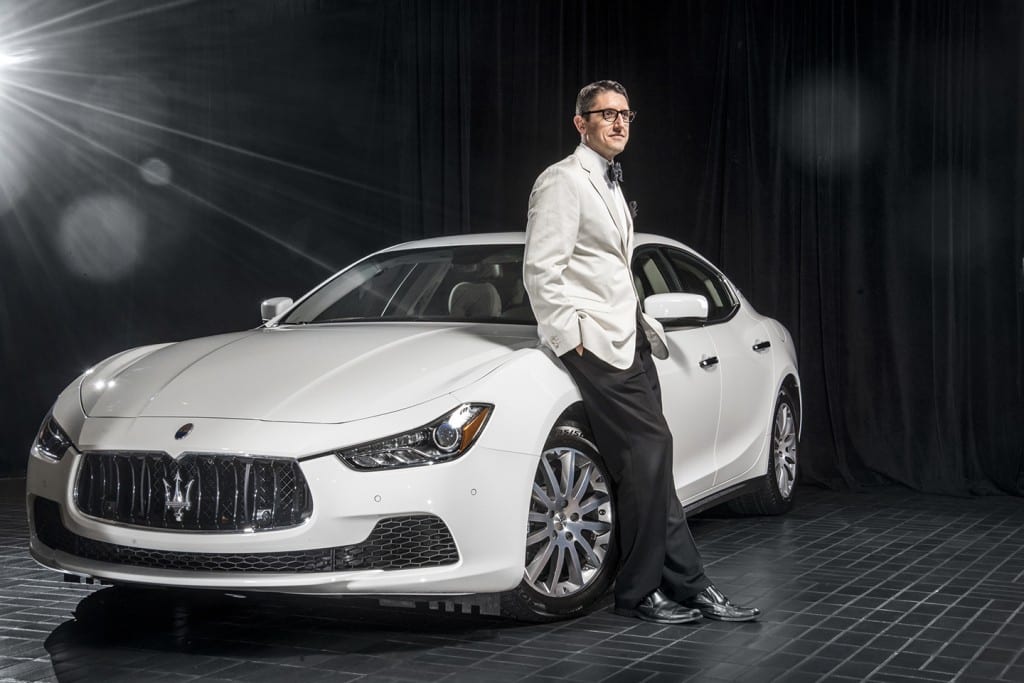 I desaturated the glaring light and background curtain, whitened the car and blackened the floor in the above image.  I wanted it to be more graphic in appearance.  I then converted the image to a black and white and cropped it vertically.  I liked it, but more might be able to be done with it… 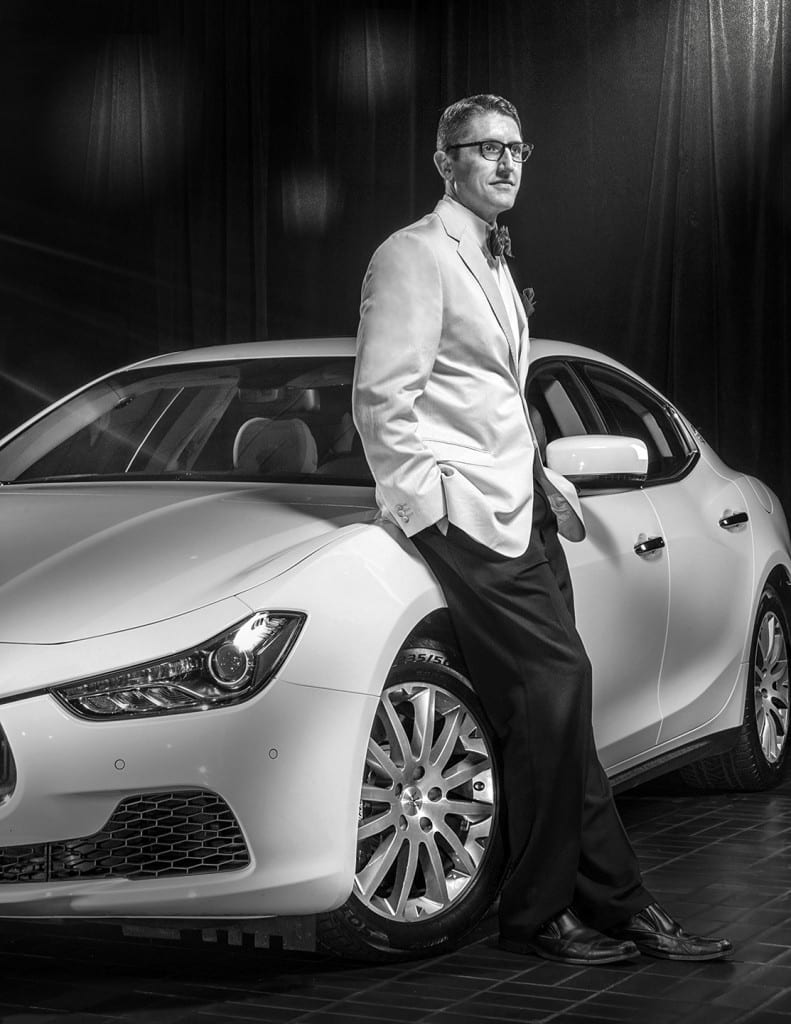 As I was thinking about what else I could do, I remembered some outtakes from a project I did in downtown Appleton late on a summer night a year ago.  I searched my files and found this view from a backstreet off Collage Ave. 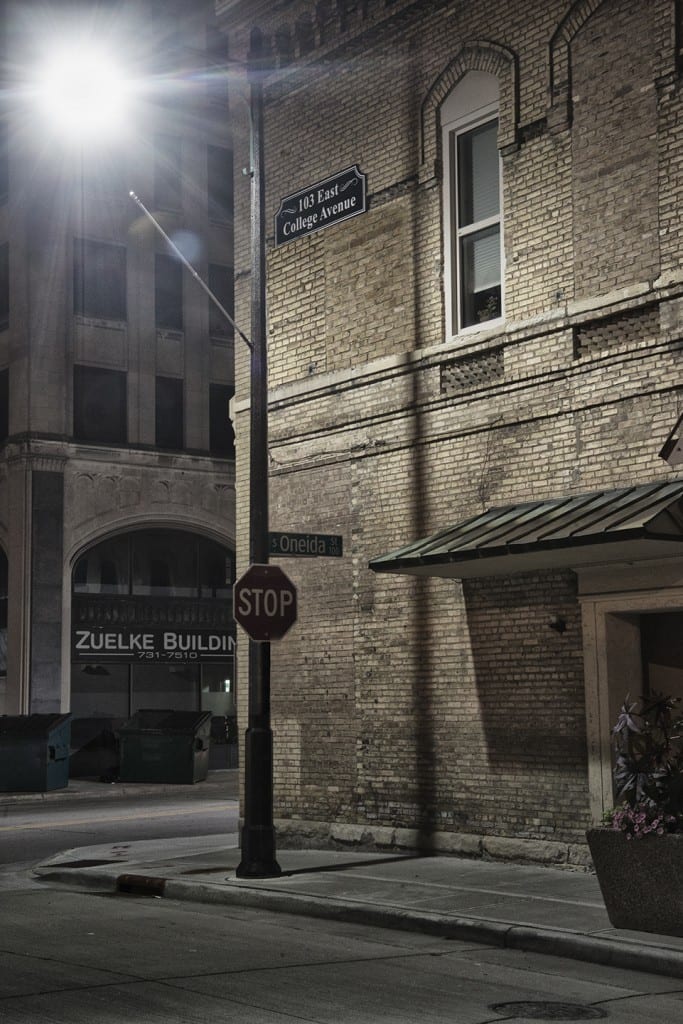 I went back to the Maserati shots from the Event and chose the first view of Josh in the white coat where he is glancing left. ( 2nd image in this post).  Originally, I didn’t like it because it was missing the glamor glare of the other view.  Well, this backstreet image has a glare in it so maybe I can combine the two images!  With this file as a potential backdrop, the final was, in my mind’s eye inching toward more of a film noir look.

I decided to horizontally flip the chosen main image of white coated Josh,  digitally cut him and the car out and place it into this back alley image. 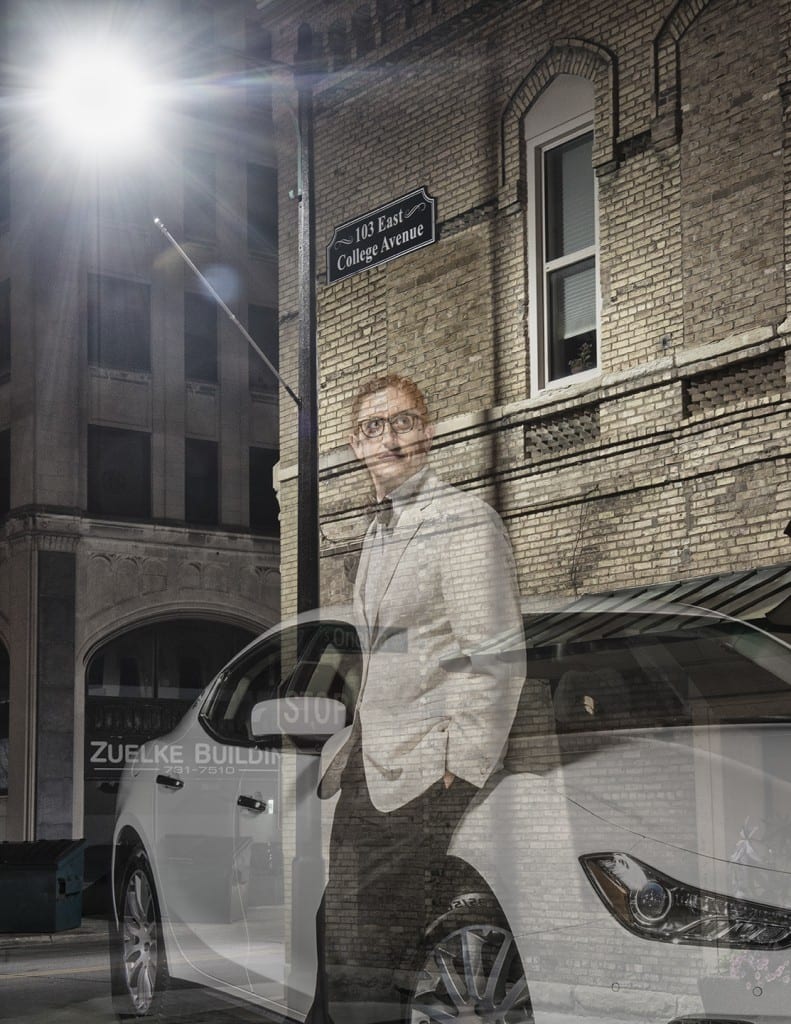 I laid one image over the other and faded the main one back 50%  to see where it might fit.  I could see that the lighting was similar as well as the upward looking angle.  I converted both files to black and white.  I also digitally cloned out the College Avenue sign on the building, took out the flag-less flagpole extending from the light pole, removed the #’s on the front tire (after flipping the image, the #’s read backwards).   I also layered a Nik bleach bypass filter at 40%, softened the wrinkles in his coat and added a faint streak of light on the lower left street.  I also darkened the edges of the frame. 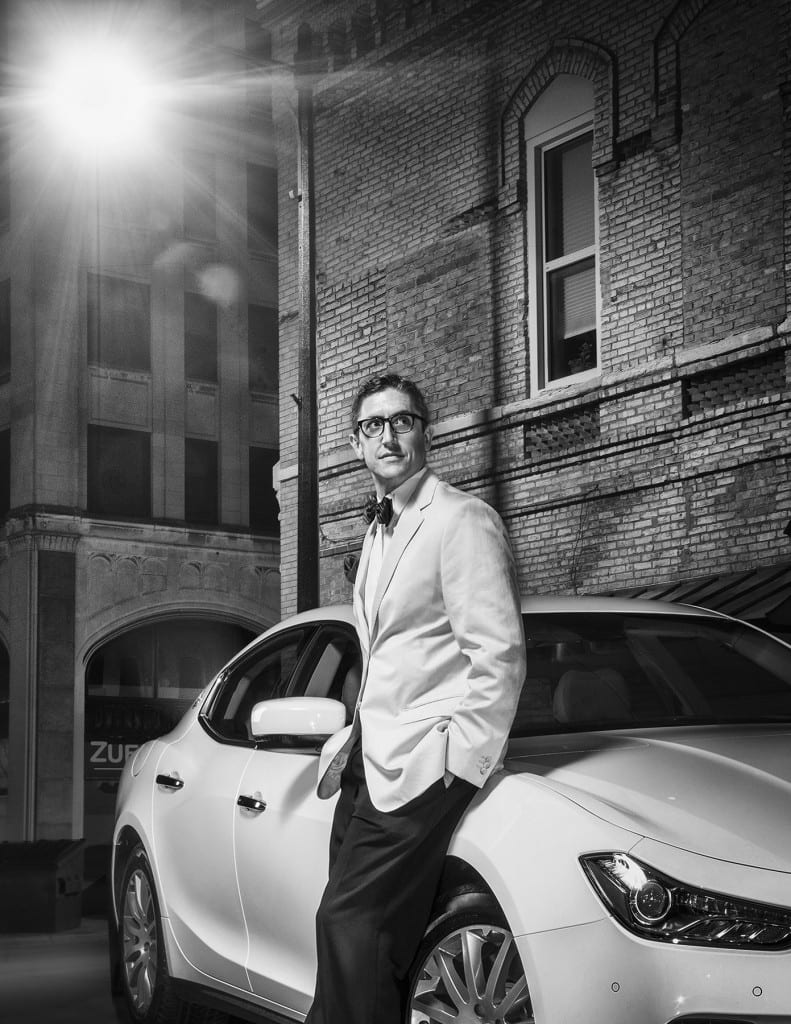 What makes digital photography so exciting is the potential of creating “new” images by combining files from previous jobs.  I have a library of skies and green grass to drop into original images that lack those elements but when angles and lighting match as they do in this combination, it adds another level of creativity, connecting background to foreground to complete the whole picture.