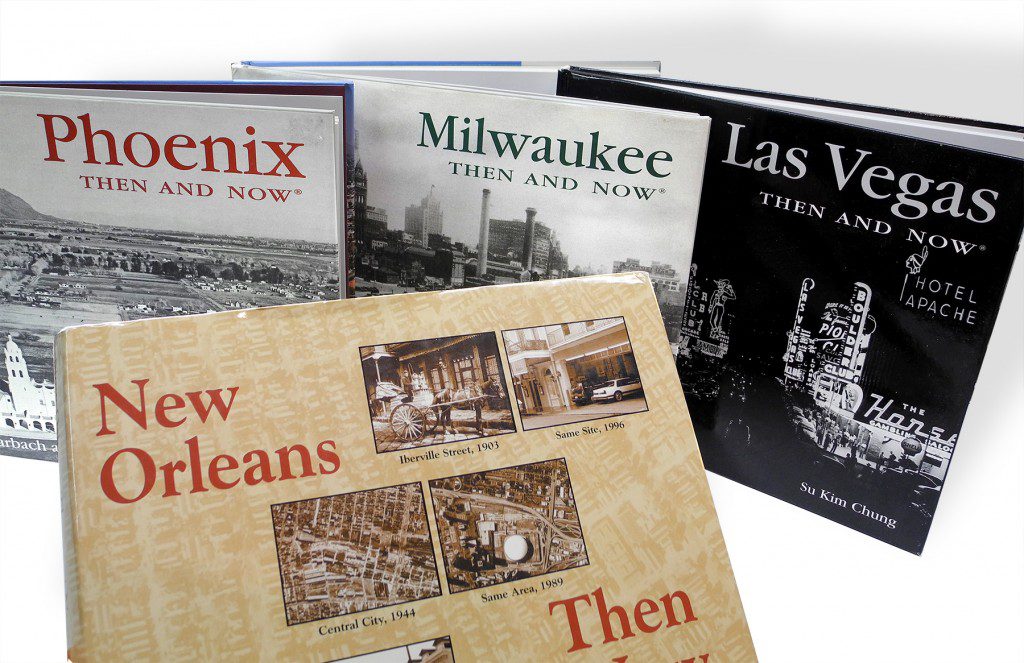 4 of my favorite photography books.

We have all heard the phrase: ” the world is moving so quickly, I can’t keep up!”  or maybe, ” When did that building go up, and what used to be there”!

It doesn’t take long before the memory of  what used to be there, fades, unless someone photographed it prior to change.

My interest in photography has it’s roots in a desire to stop time, to hold on to someone or someplace before it is gone.  One’s life is framed and influenced by where they live, the house or apartment, the street where that structure sits, the neighborhood, the businesses that make up that neighborhood, the street layout, your childhood friend’s kitchen, the church,  barriers and fences you remember on the way to school, even the kind of mail box you had.

Robert Crumb the Cartoonist who ushered the first successful publication of the underground comix era in the 1960’s and continued to influence pop culture during that time had, later in his career depicted the evolution of a small town.  It was done in his undeniable style and frame by frame shows the “progress” over time from the same street corner’s vantage point. 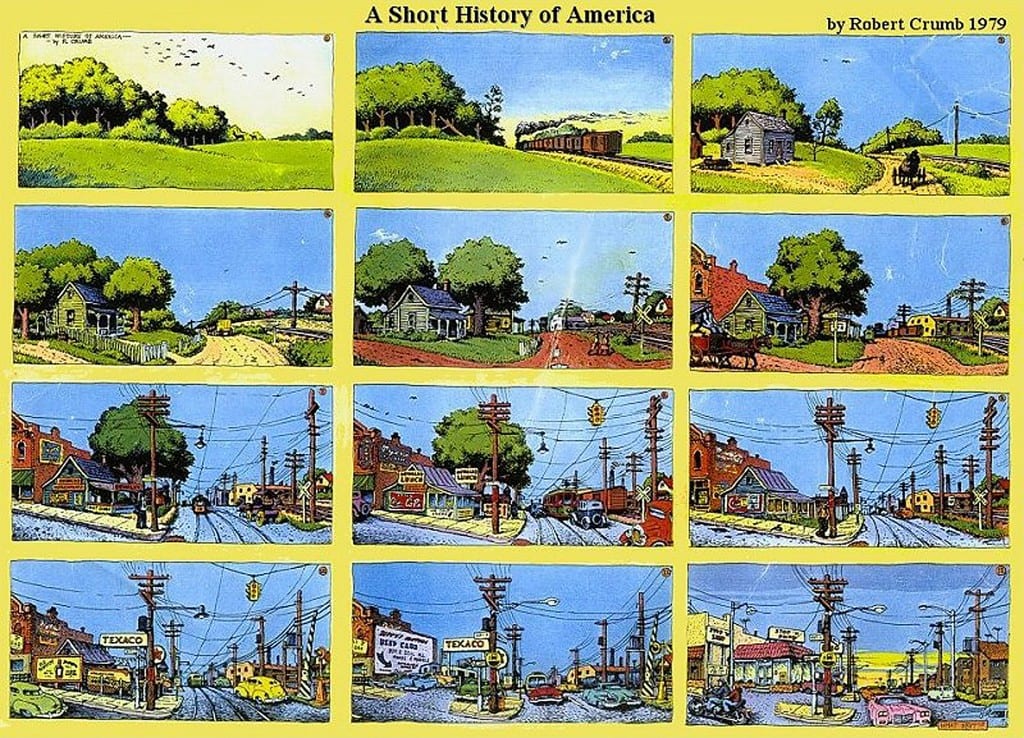 This brings me to my initially unintended, personal photographic timeline of the structural changes incurred over 80 + years to a family farm.

My grandfather’s farm in central Wisconsin was an exciting destination as a child.  Living in suburban Milwaukee, a trip to grandpa’s farm was as exciting as it could get: the cousins, aunts, uncles, the real mashed potatoes, the barn, the hayloft, the chickens the pigs, the fields, tractors, etc…etc… There was so much life on that farm, and so many people coming and going and so many animals, and smells and tastes that when it all came to an end at an auction in autumn of 1972 following my grandmother’s passing, I was compelled to snap some photos with my Kodak Instamatic 50 capturing 12 photographs of the lifeless, stripped property before it was sold.    I have since found a few earlier photographs from the 1950’s when the place was literally in it’s heyday (no pun intended).  So, as a personal Then and Now visual study, I put together some photographic comparisons. 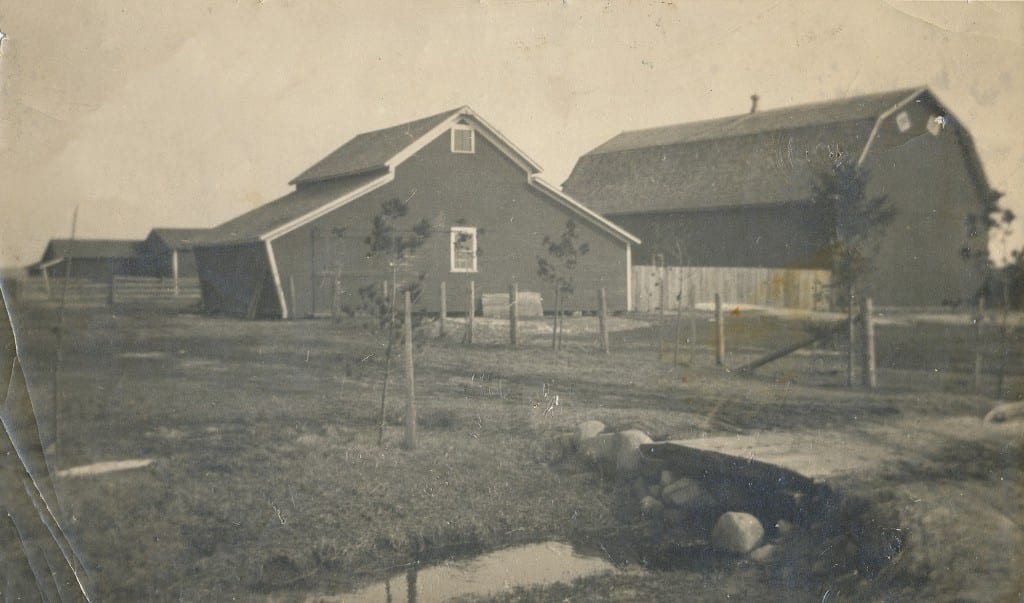 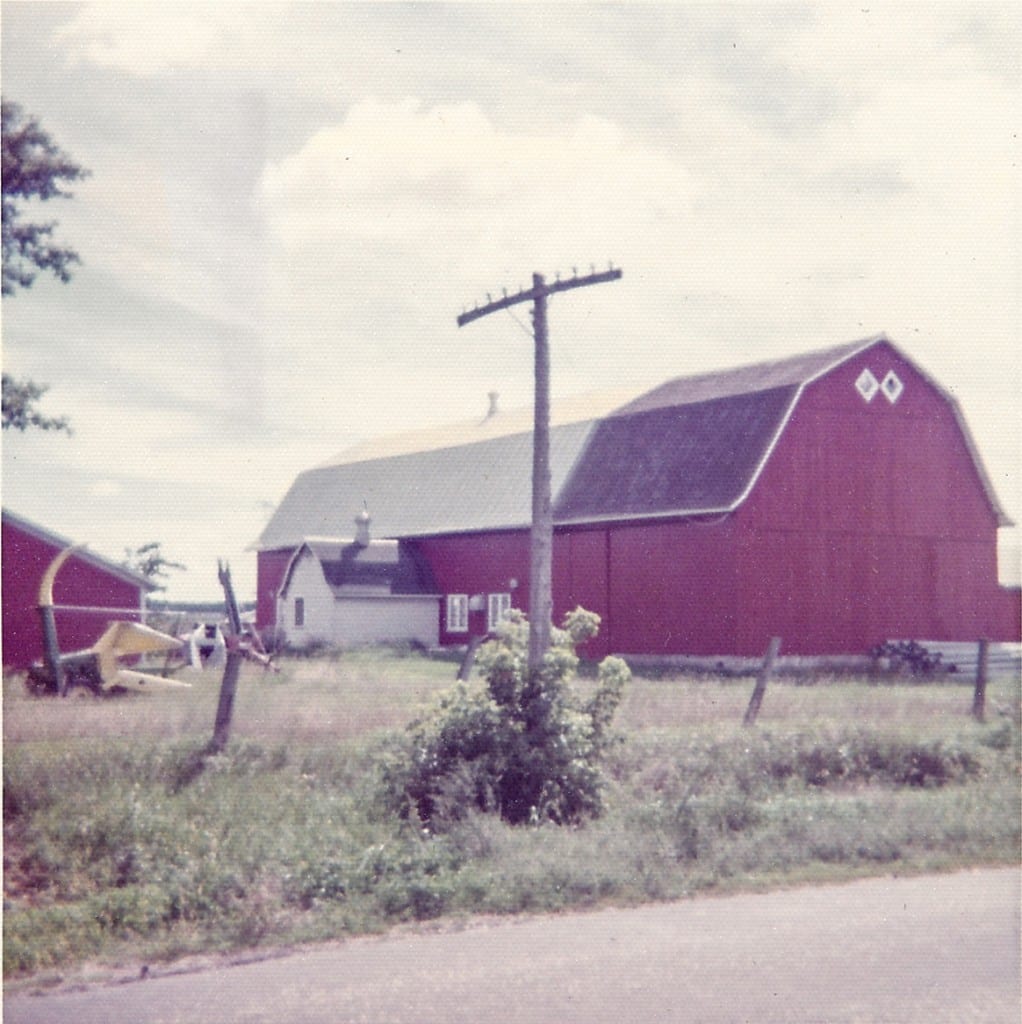 The front porch has gone through a few changes, (but a tin roof seems to be an initial good investment). 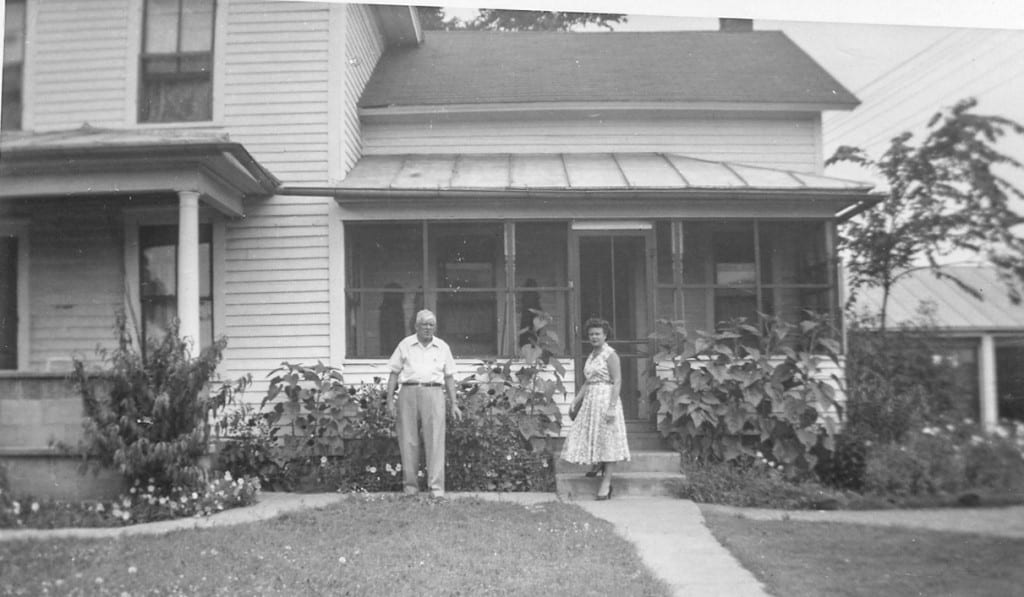 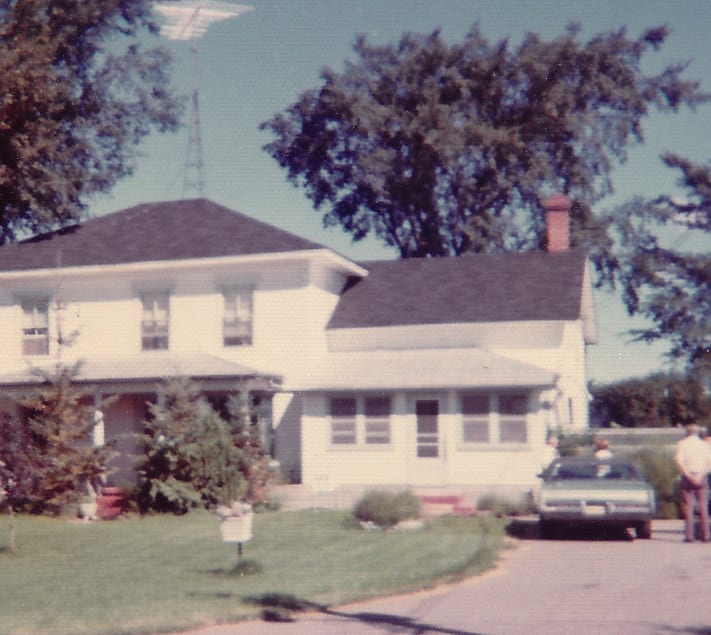 One more change came as an embellished faux brick was added to the lower front of the “porch” and a new tin roof. 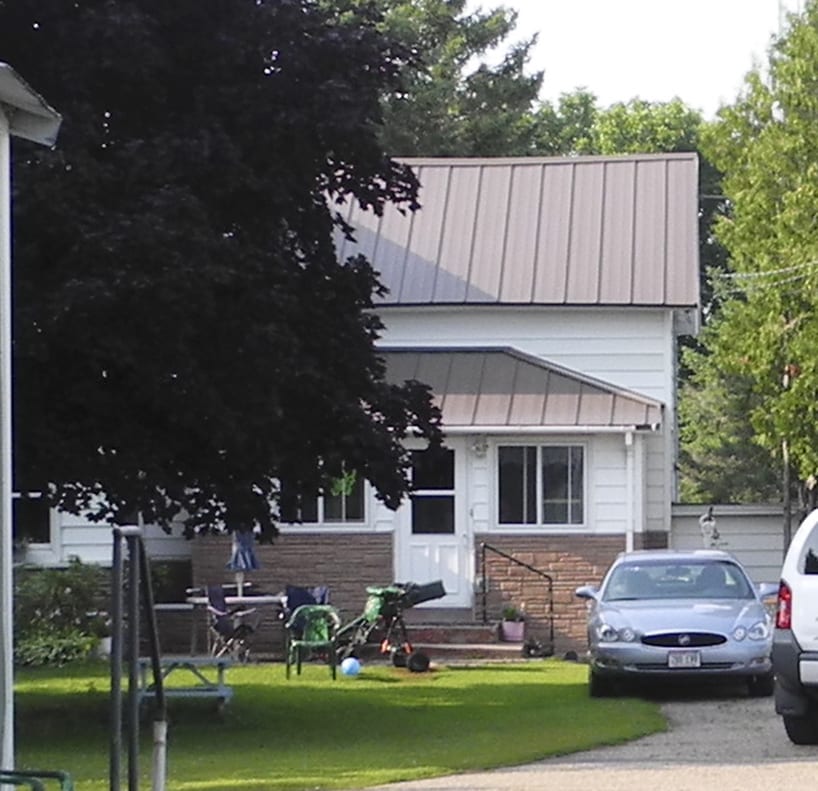 Like a forensic body farm, some of the structures on the property were untouched and simply worn down by time . 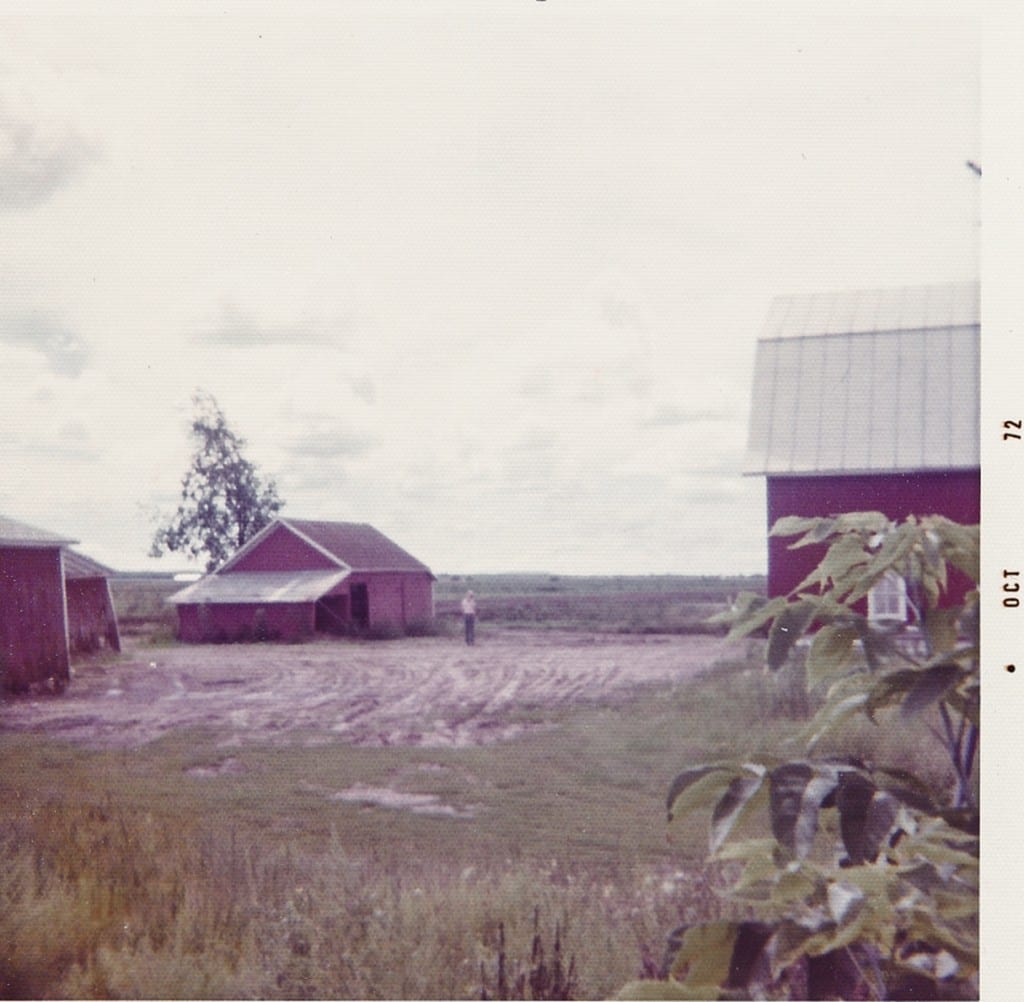 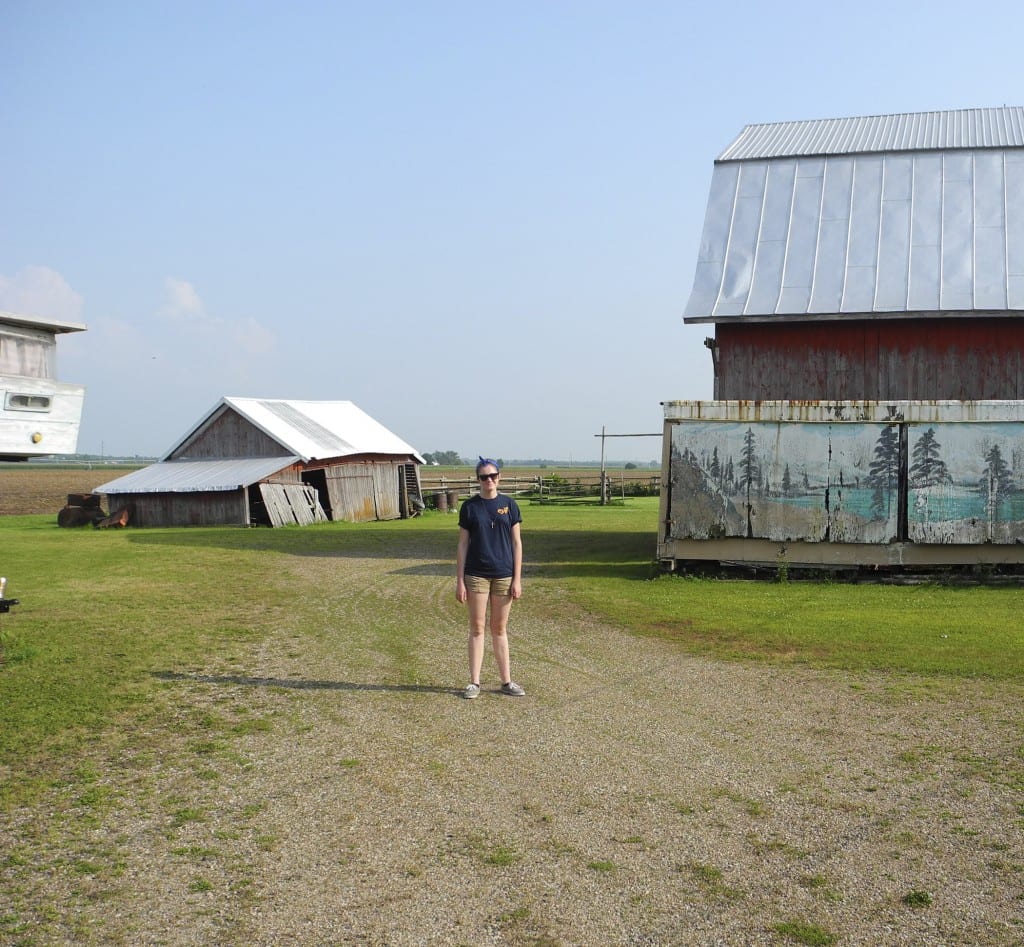 42 years later  (with my daughter Caroline)

The milk processing structure actually improved from 1996 to 2014. 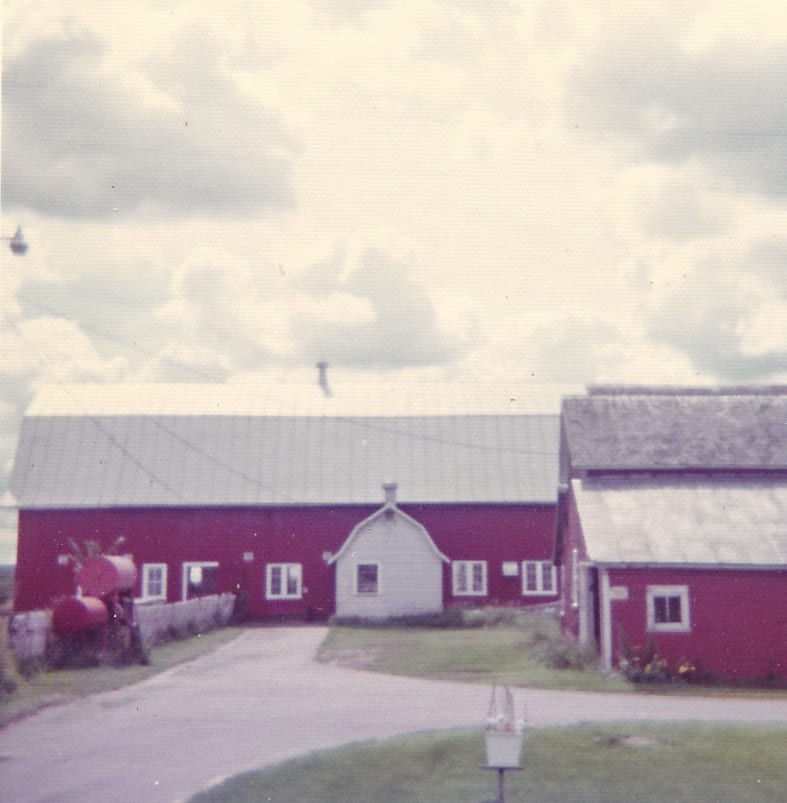 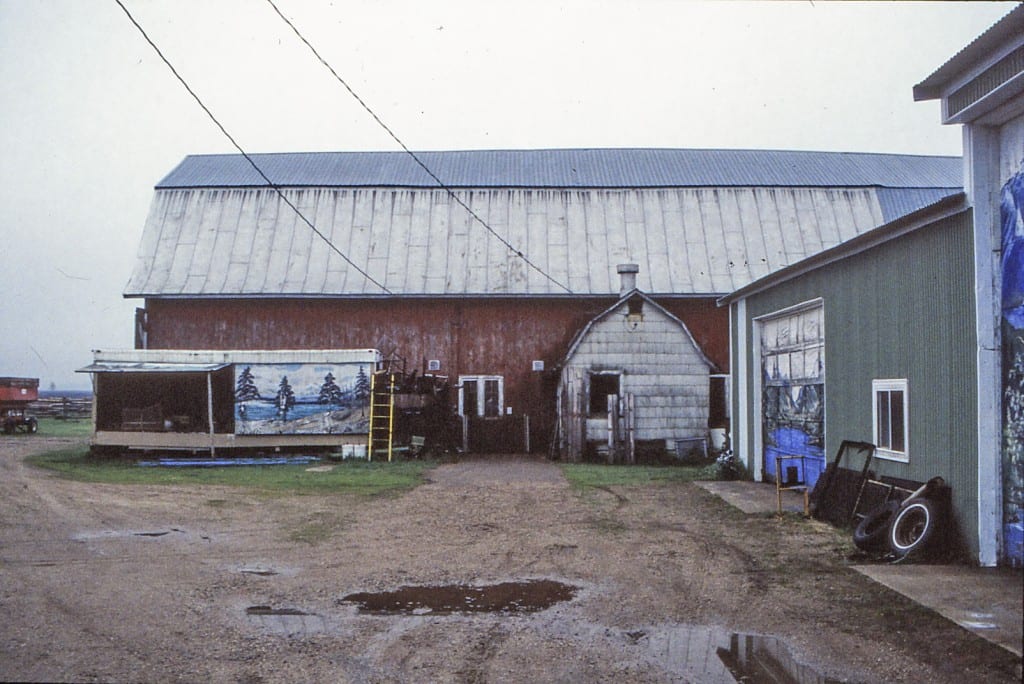 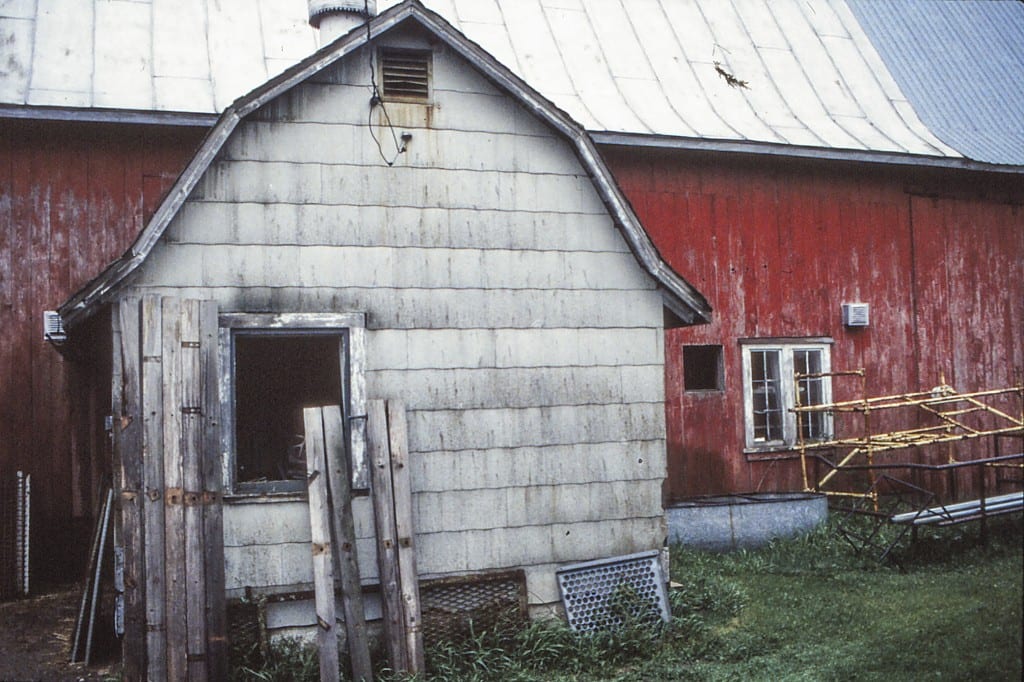 This structure has seen better days. 1996

A new window and a texting teen have brought the milk house into the 21st century.   How times have changed.  If only farmers knew back then that one day people will walk around with a phone/camera/typewriter/video recorder/music player/newspaper/library/… Mind boggling. 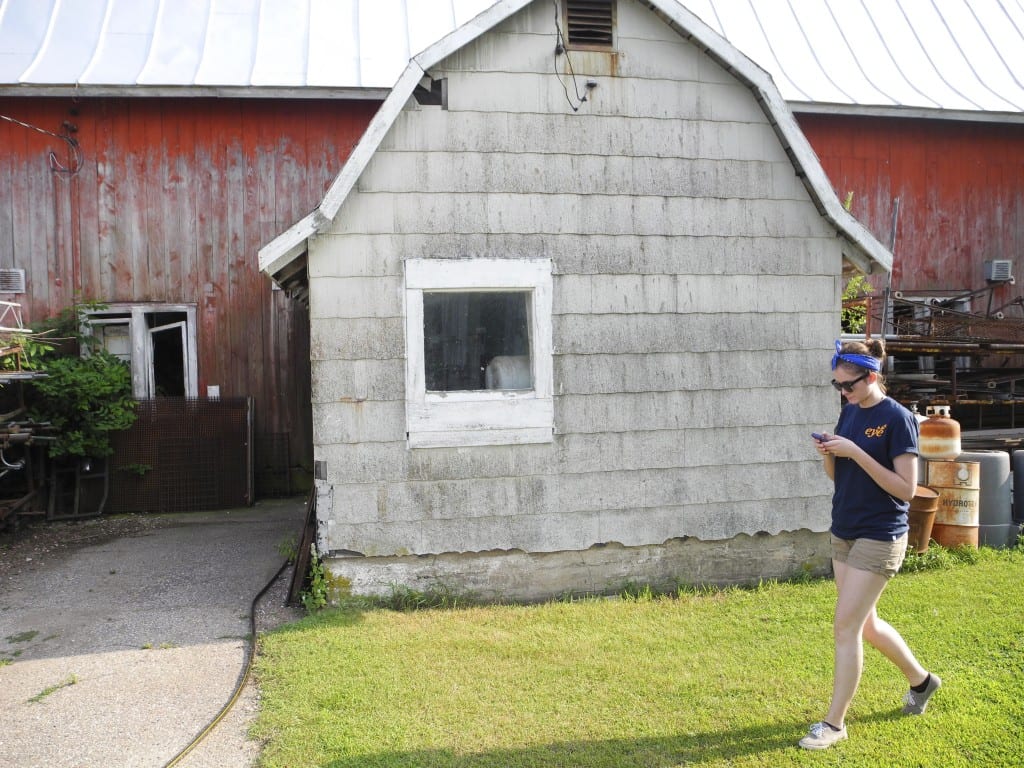 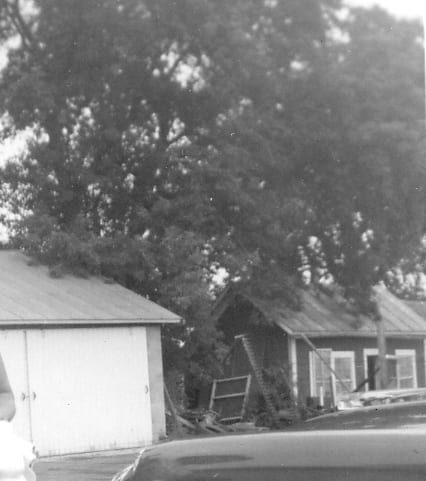 The working Chicken Coop in the early 50’s 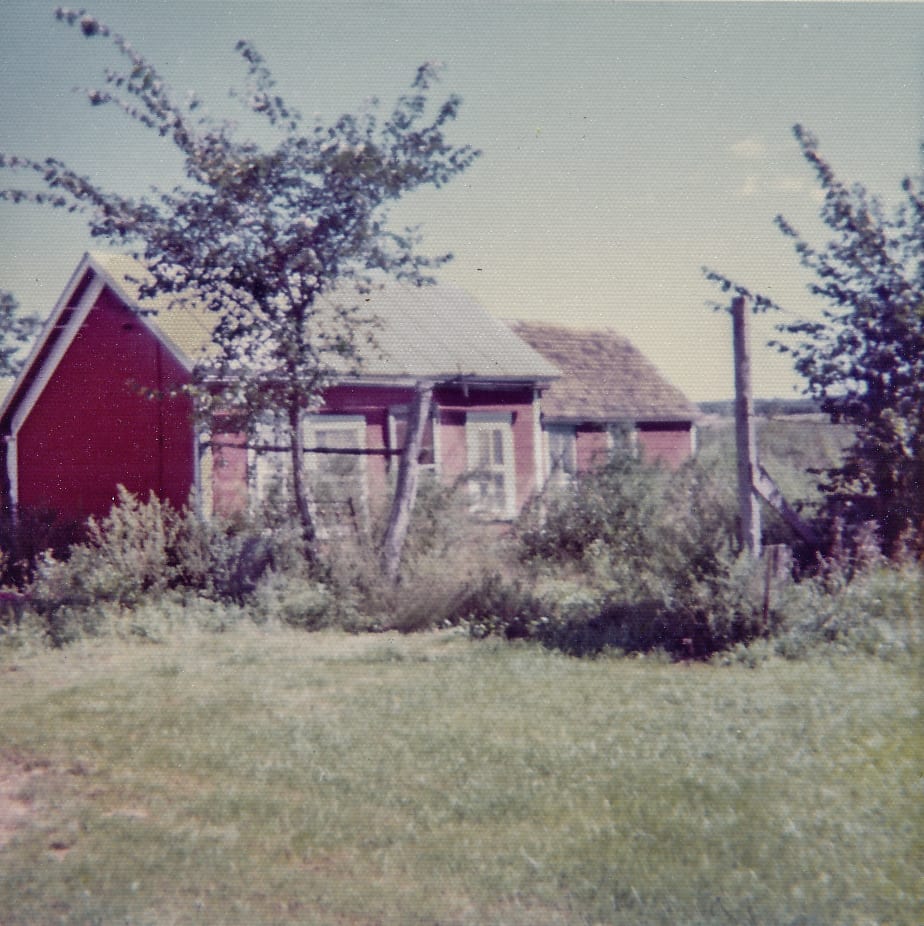 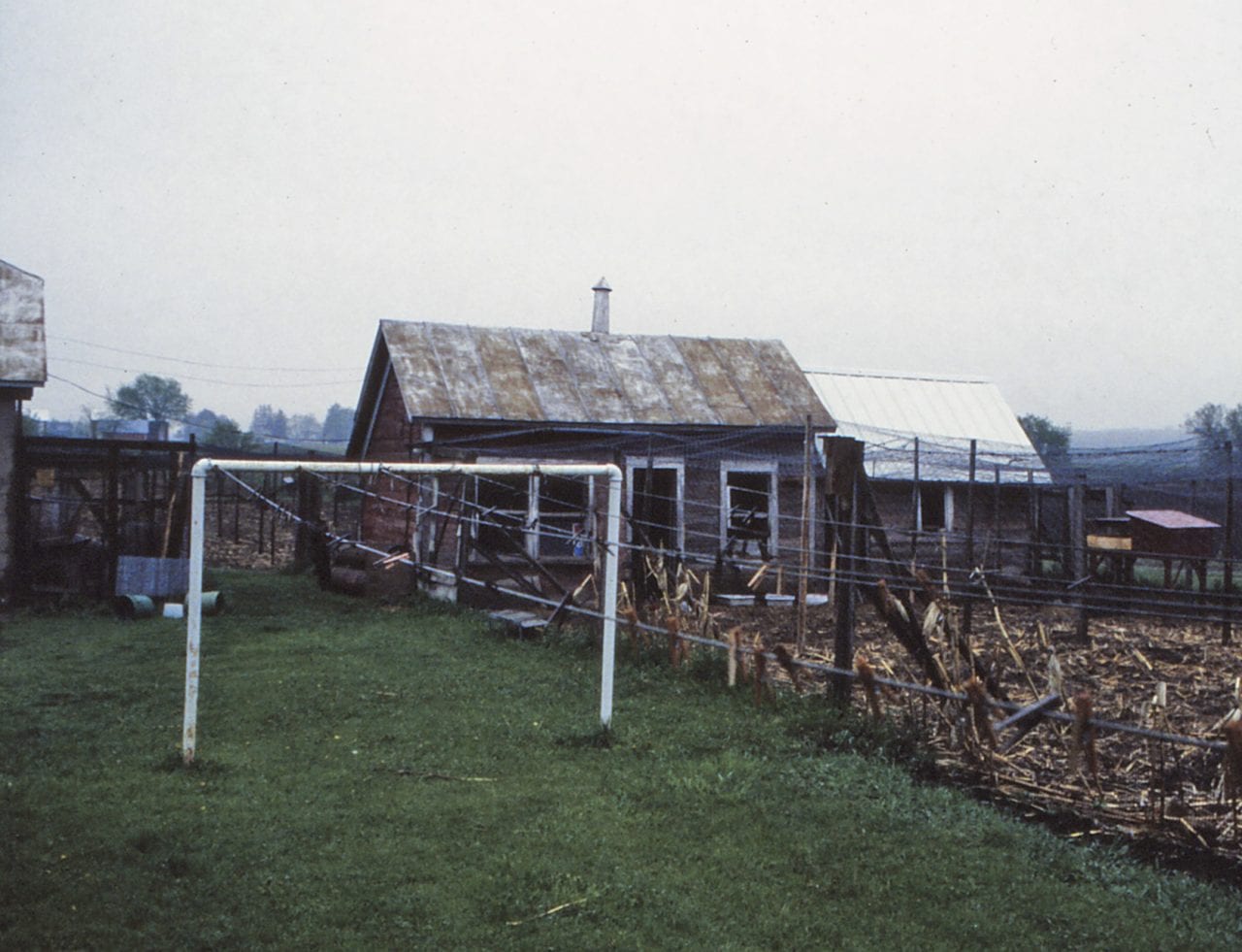 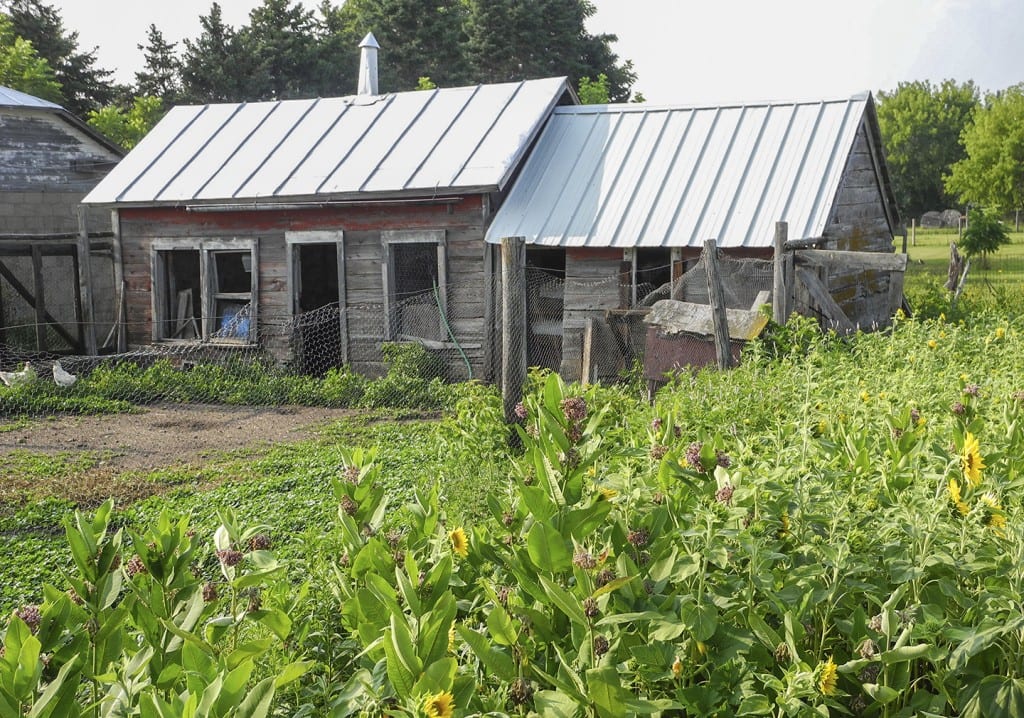 And finally, the barn… unfortunately I have no photos of the inside during it’s working days.  These 2 images simply reveal the longevity of the interior wood frame work 42 years apart.  This is looking down toward the hay loft beyond the cow stalls.  As a kid in the late afternoon the summer sun would bleed through the southern facing vertical slats with the hay chaff appearing and disappearing, floating in the still warm air.  It was a cathedral of light, smell, motionless sound and peace, interrupted by the occasional drone of a fly or flutter of a pigeon, flapping up high from one corner of the loft to the other with a startling burst of energy.  The hay loft section of the barn was usually the last place I would hang out before we were ordered back into the station wagon for the trip back to the city on a Sunday evening.  As the shadows grew longer on the bales and the sunlight twinkled between the old boards, I knew I would be back, and everything would be the same.  When the barn was gutted and I saw it after the auction, it obviously wasn’t the same.  I went back there a month ago in August of 2014.  After stepping into the cavernous shell,  I noticed  the sunlight, dancing between the boards on that southern wall.  It was late afternoon, Sunday.  Time and the elements have widened the spaces in those slats, but the luminescence and glow were just as I remembered,  and the stillness was even more profound. I came back, and I knew the barn was nothing as it was, but my vivid recollection of the peaceful light flickering through the slats on a late summer afternoon was as it was, streaming in through those same vertical weathered barn boards I contemplated as a kid.   Then, without warning, a pigeon darted off a beam and out into the world flapping wildly, until there was stillness again. 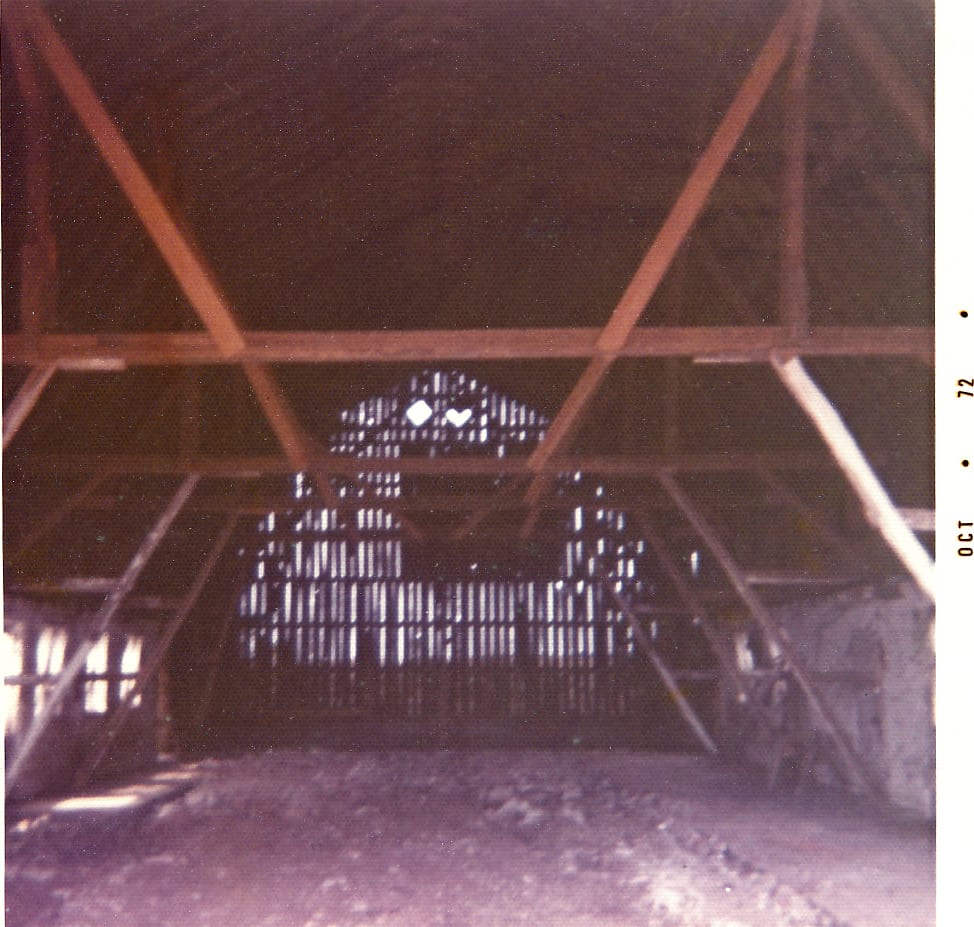 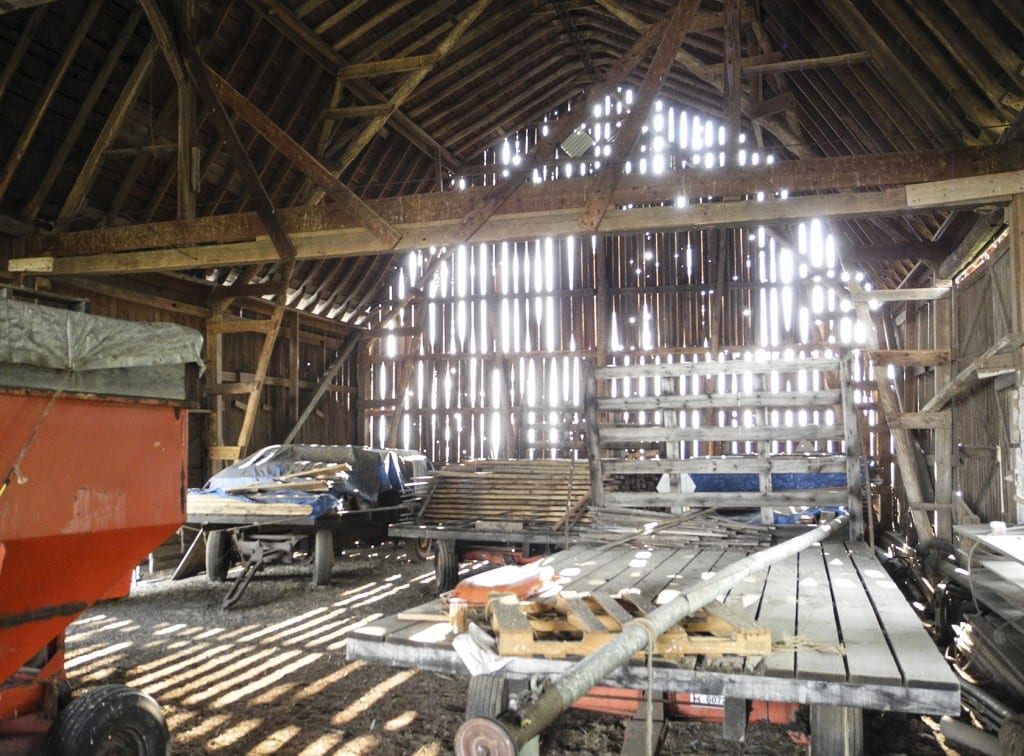