Photography used to be an effort.  My first real camera was a Cannon AE1.  It was heavy and not very ergonomic. In high school, the people who took photos were either doing it for the school newspaper, an art class or it was a hobby, like stamp collecting.  Maybe it was interest  handed down to them from their father or grandfather.  I remember those guys being kind of cool in a techie/artsy/outdoorsy way.  They took a lot of nature pictures. (Think John Denver with a camera).

There was film, and with it, decisions had to be made as to what kind to use, beginning with black and white or color.  (I won’t go into ISO’s, film grain, manufacturers and cost. These were all elements to consider before shooting).
Of course, then there was the darkroom.  After you burned up your 36 frames, you either dropped the film off at a Fotomat drive through one day service kiosk or a corner drugstore where the film was developed and returned to be picked up with your 3×5 or 4×6 inch prints.  If you shot black and white film and had access to a darkroom, that’s where the fun began. 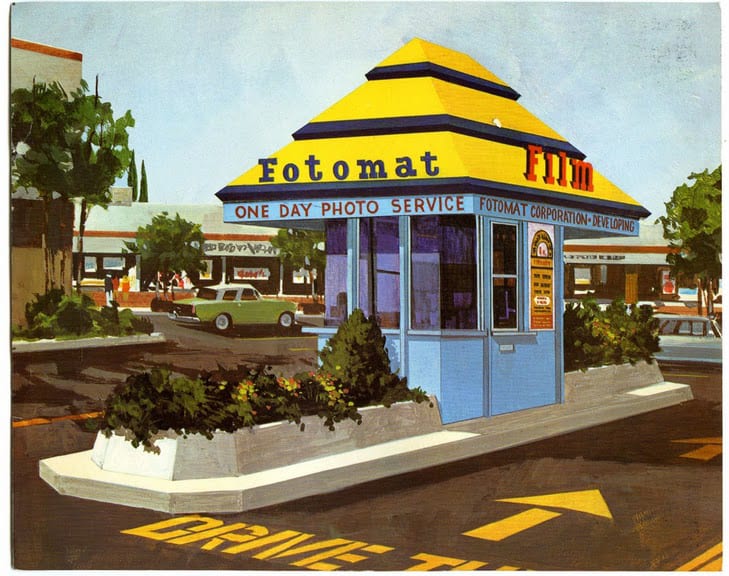 You could develop the black and white film yourself if you desired if you enjoyed meticulously following every step from the microscopic, voluminous directions in the film box.

Once in the dark, with your developed T-max 100 film strips,  more decisions had to be made with regards to type of paper to print on (gloss, matte, semi matte, flat, fiber, RC,etc)  and size.  There were stinky chemicals and drying racks and safelights and black painted wooden walls and wire strung with clothespins, and water water everywhere.   When I was in the darkroom, bringing my negatives to life, before my safelight adjusted eyes, it was magic.  Hours flew by.  An entire afternoon would pass before you could say D76.

What is the point of all this pontification on the effort required to make a photograph from start to finish, not so very long ago?  I think it has to do with the proliferation of good, cost effective digital cameras now available, thus facilitating the random outsourcing of memories and impressions to memory cards, phones and  computers.

As a professional photographer, I have always struggled with the decision to put my camera down and simply be in the moment.  For as long as I remember, I used photography to stop time, to capture a moment, event or impression.  When I shot film, I had 36 frames, and I selected my subjects and scenes with care.  I had my eye to the viewfinder, framing the composition.  I still do that, however, many other thoughts are present now as I shoot: I will get it from 3 angles, to cover myself.  I will replace the sky in Photoshop.  I will convert the image to black and white as well as sepia tone in post production.  ( I still have clients who cautiously ask if I can shoot color AND black and white.  Of course I can!)

I have no affinity for the effort needed to do this with film, toxic chemicals and darkness.  Having said that, I think the mindful attention to what I chose to photograph in those days assisted my long term memory of those events and scenes.  I find myself outsourcing memories  to the chip in the camera at a rate of 100 or more frames at a family reunion, to capture and preserve a beloved uncle or aunt who may not be around much longer. That feels selfish to me now.  I  snap a half dozen frames of a landscape while traveling  that I didn’t have time to enjoy while passing through, thinking I will catch up with it later.  Most times, I don’t look at them later.  I have  a folder called :  to look at sometime.   There are hundreds of files in there.

I had a photography teacher who said, print your images and hang them up.  Look at them. Live with them. They will become part of your narrative.  By the way, what brief popularity  those rotating digital photo frames had.   They brought the photos you took into your consciousness by automatically, perpetually displaying all the shots on your memory card, 24/7 if you wanted, instant perpetual narrative!

On a recent vacation I decided to bring a sketch book and sketch what I saw in quiet moments instead of snapping a picture with my leisure camera.  I can bring forth that memory of the scene from my chair at the beach in vivid detail.  I’m not sure that would be possible  if I had simply framed it and captured it with my camera, probably not to be looked at again.

With the convenience of carrying a phone/camera/video device in our pocket, we surely can capture moments upon moments upon moments very easily now.  I feel fortunate to have lived and worked during the transition from film to digital .  As I mentioned, I have no nostalgic desire for ever going back to the pre digital film days, (unlike my unending love of vinyl LPs), however, I would like to preserve a bit of the deliberate mindfulness inherent in pre digital photography that I have forgotten.  I am reminded of the random excesses of “capturing the moment” when I go to my daughter’s violin concerts.  There seems to be more people looking through screens than not at times.  A fitting metaphor might be ” put down the device and hear the music!”  I am beginning to believe that NOT capturing the moment, and simply living in it, paying attention to the smells, peculiarities and mundane details will lay foundations for rich memories.  Those memories will change, fade and evolve with time … just like life.