An attempt to dissect and condense a life of influences that fuel a passion for photography would be a great undertaking.  To put into words, the puzzle of fragmented inspirational snippets from music, art exhibits, mentors, smells, pop culture, movies, sunsets, shadows, road trips, TV shows, schooling and so on,  is comparable to writing one’s autobiography.  I think about it often, not writing my autobiography, but what, in my life,  has influenced my vision or perception as a photographer today.  I know it when it hits me:  a song from a long forgotten CD  or a painting I view on a wall in a gallery,  the smell of a specific bar of soap that takes me by surprise.  Life is made up of millions of stimuli, but not everyone gives me pause and impacts my vision as a photographer.

Here are a few I identified… 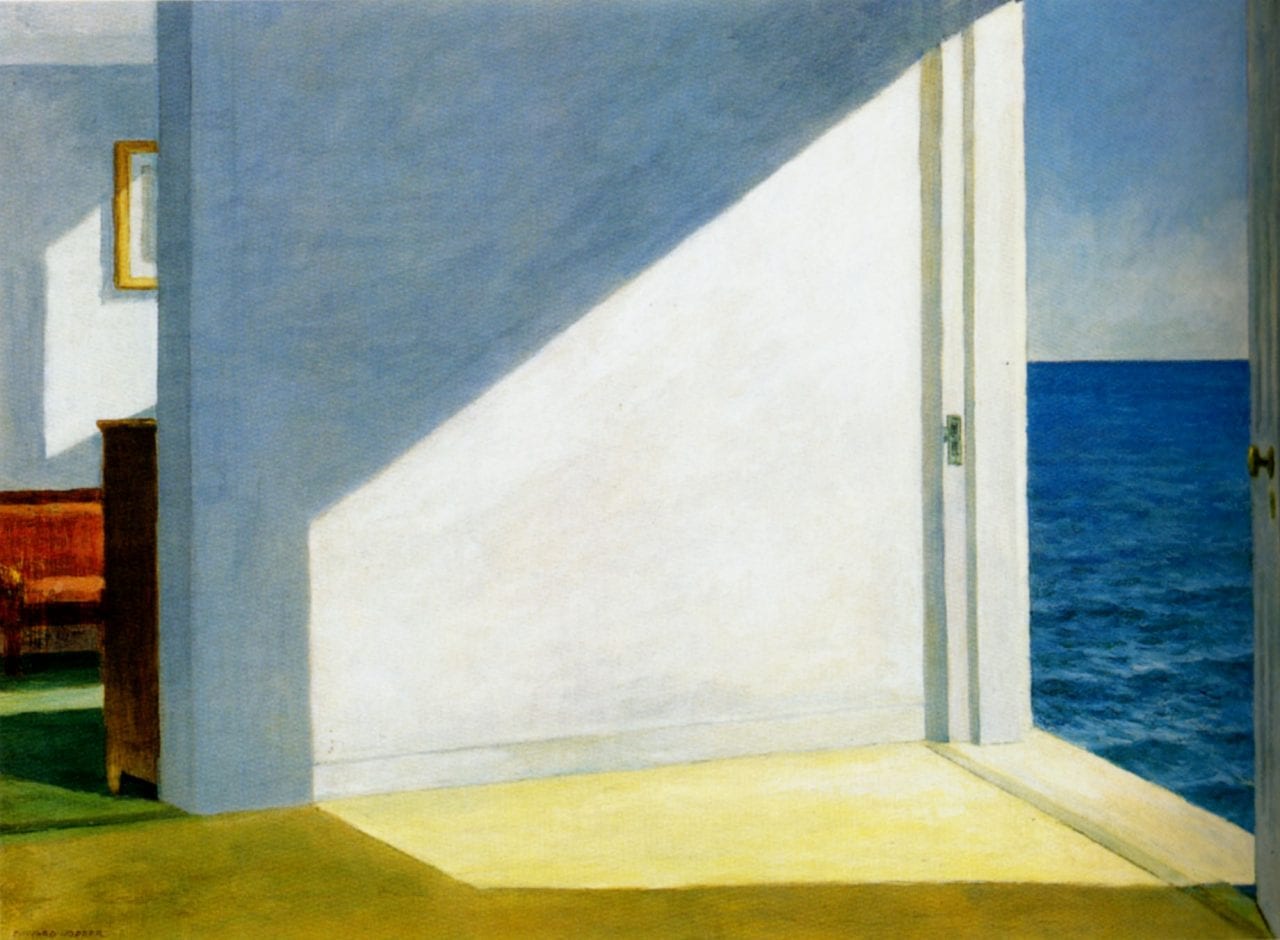 Besides Hopper’s dramatic, high contrast painting technique, his subject matter has always been attractive to me.  His depictions of quiet ordinary moments in life, usually a lone person or none at all, celebrates what we all have experienced, but have not thought worthy of remembering.

Arriving on toy store shelves in 1964, the boxes were a magnet with their vivid colors and dramatic, mysterious lighting.  The representation on the box was better than what was inside. 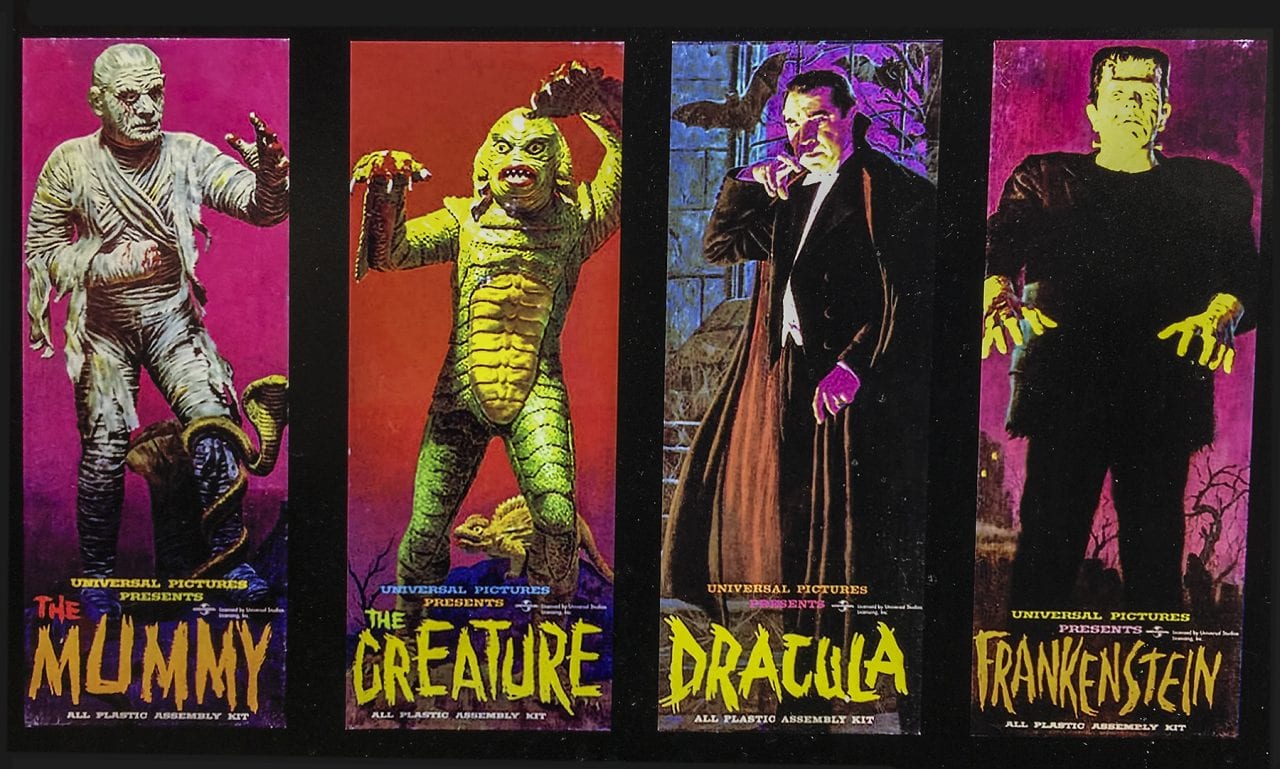 These boxes hinted at what was inside. (James Bama was the artist)

When it comes to movies, the details in cinematography are what  I notice first:  lighting, color palette and the overall look of the film, wide sweeping angles or tight interior setups.  Of course,  plot and story line are of importance.   The Wizard of Oz combined dramatic black & white footage in the first part of the movie with hyper saturated color in the second half, (after touching down in the marvelous land of OZ!)   This film  came on once a year.  It was viewed religiously. 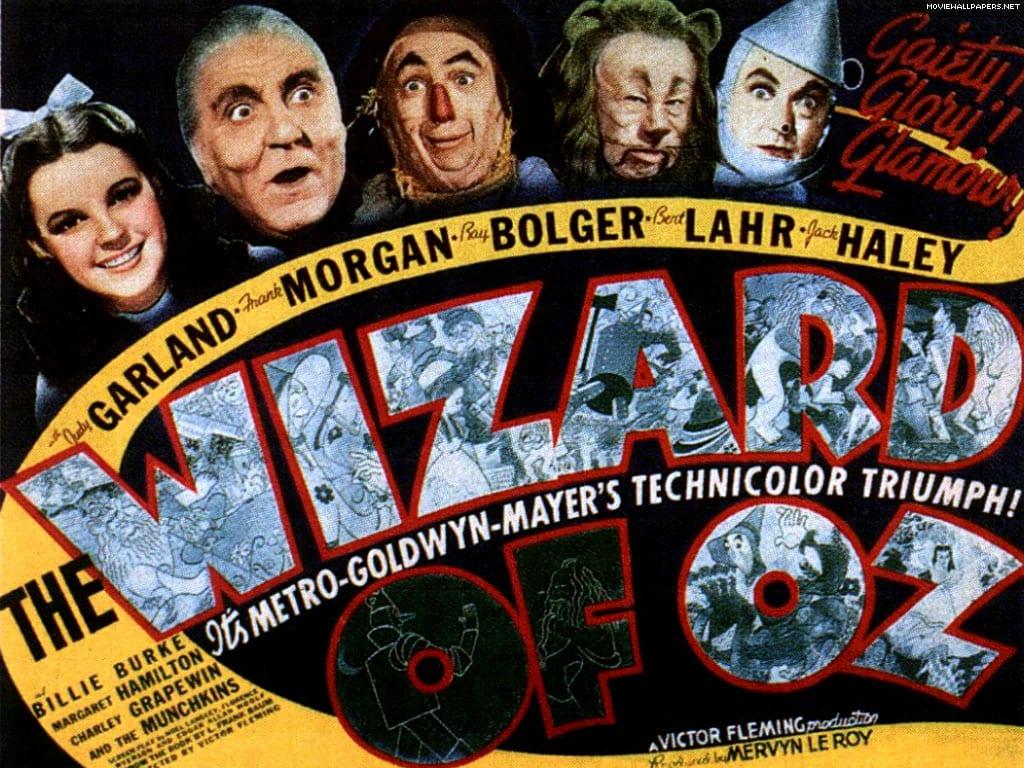 The fantastical depiction of a child’s journey with a group of misfits is a favorite. The black and white to color conversion was magic!

Joe Buck begins his journey from his hometown in Big Spring Texas and moves to New York City to earn big money as a male prostitute.  Texas to NYC are two dramatically different locations.  In my opinion, this movie could have been shot totally in black & white (only the memory sequences are), but the final result was depicted beautifully in 1960’s color by DeLuxe. 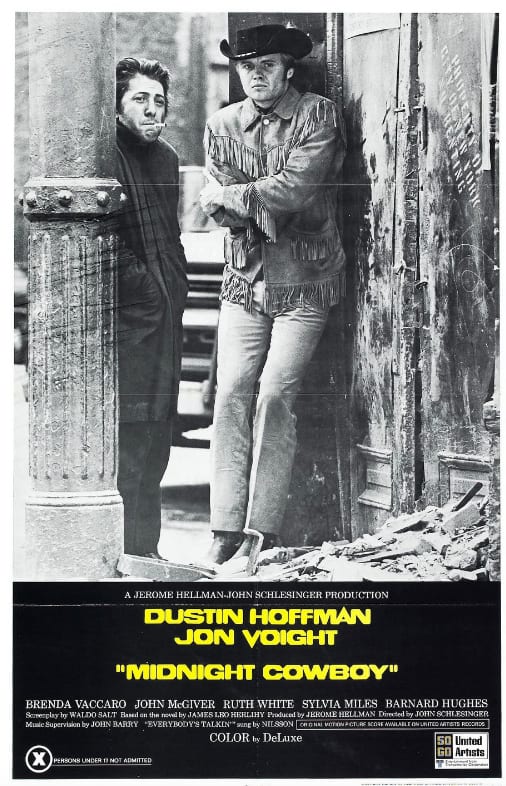 Gritty, bold and depressing. A story of self discovery and redemption earned through a grim journey. Great example of  cutting edge cinematography style of 1960’s filmmaking.

Sideshow poster art was produced to draw the viewer in, to view people with disabilities on a stage.  My memories of sideshows were at the midway at the Wisconsin State Fair in the 1960s and 70’s when ” freak shows” were still in existence.  The lineup of huge, primitive,  brightly painted canvas posters were usually at the far end of the midway.  The poster’s bold depiction of what might be inside completely mesmerized me.  The smell of cotton candy and greasy french fries mingled with dust, heavy metal recorded music from the orbiting Matterhorn ride and barkers everywhere, promoting everything, made for an exciting, chaotic experience.  The side show art was the seductive lure to step up, pay your dollar and  view the abnormal. 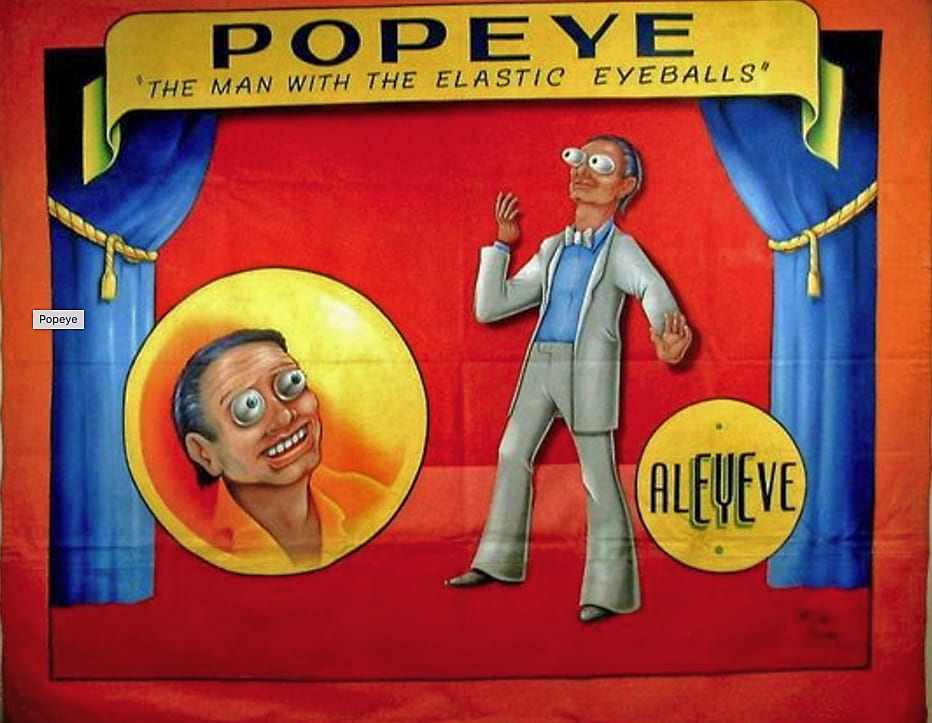 This poster was disturbing to me as a kid.  How could this be a real person I thought.

The comic strip Nancy by Ernie Bushmiller was the first comic I read in the Milwaukee Journal, (when receiving a daily newspaper was common).  The charm was the simplicity and clarity of lines and structures.  The horizon line in outdoor locations was strong.  Buildings had signs that said:  SCHOOL or ZOO.  Windows always seemed to be open.  Night scenes always portrayed the blackest sky with a perfect crescent moon.  (I equate the world of Nancy to the simple, slow, uncomplicated world of Mr. Rogers, the host of the educational preschool television series, Mr. Roger’s Neighborhood, 1968-2001).  Ernie Bushmiller used only essential elements to render Nancy’s world, and tell a story,  a concept I try to  keep in mind while using my camera. 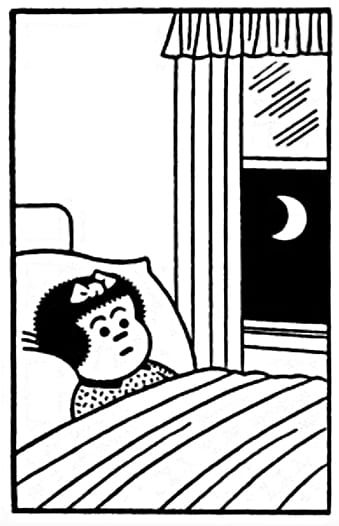 Elemental simplicity in a complicated world.

Black & White Polaroid photographs were introduced in our house by my dad.  He purchased a Polaroid Automatic 350 with black and white film packs where the fixer had to be applied by hand after the photo was developed.  Over time, as I look at these pictures today, the brown, faded image with the deckled edge boarders represent the patina or maturing of time on an experience, like beautiful rust.  We had dozens of these photos capturing uneventful moments in our family’s lives. ( I don’t remember seeing a shot of a birthday party).  Maybe out of boredom the polaroid camera provided an instant thrill. 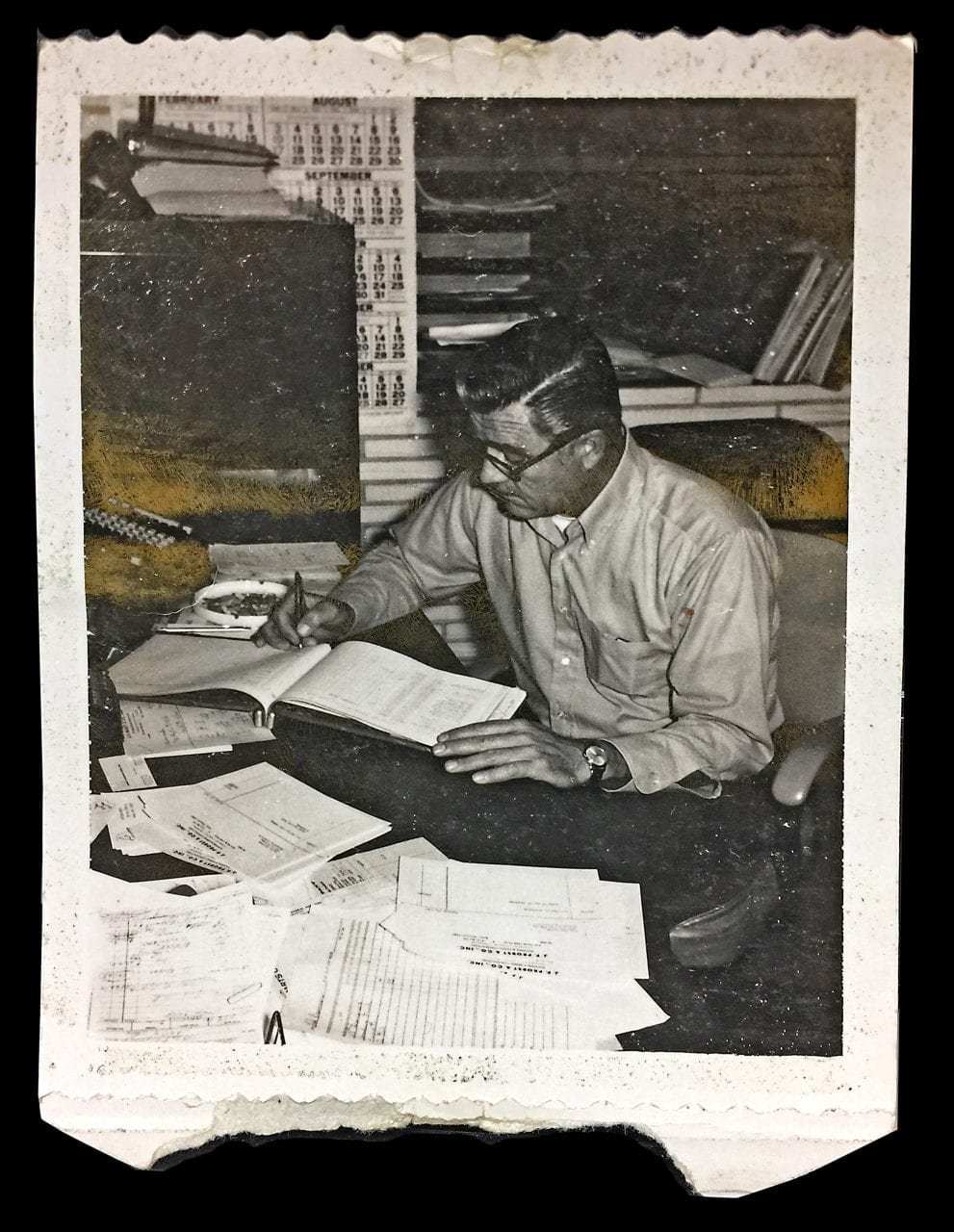 The covers of the Golden Book Encyclopedia were illustrated still life scenarios.  The books were given away weekly at super markets to lure shoppers during the early 1960’s.  The still life set ups pictured objects that began with the letters within that volume.  Each cover held mystery and intrigue for me as a child. 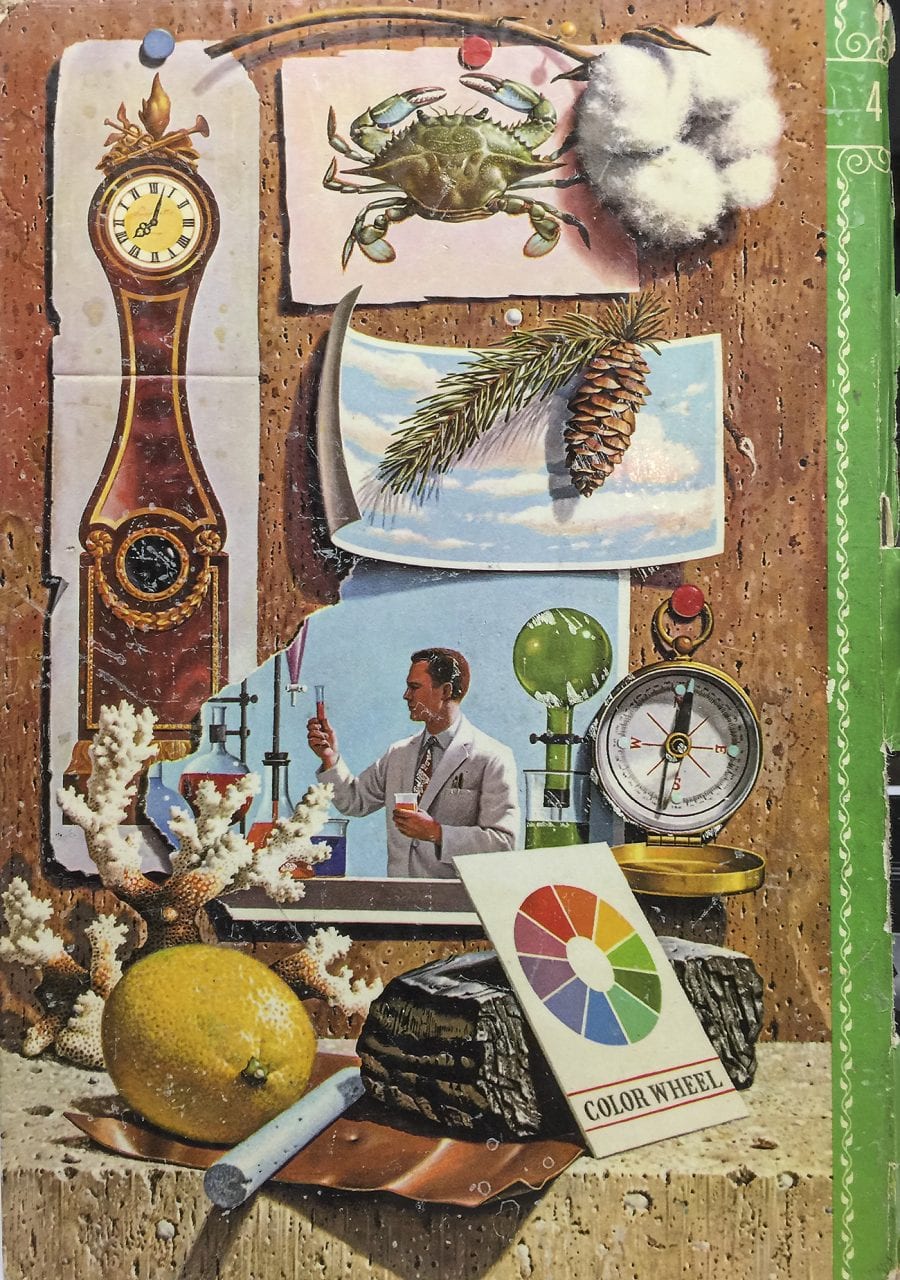 Before my parents passed away, one of the expressions of gratitude, I communicated to them was my appreciation for the family vacations we all took, by car to the many destinations in the US.  Of course this was before smart phones, wifi and GPS, so my brothers and I  looked out the window as the miles flew by.   Examining the seemingly  ordinary:  the grey ribbon of road ahead and behind, the shadows the station wagon made on the shoulder of the road and trees, moving along with us in the late Florida afternoon sun, roadsigns informing us of gas food & lodging ahead,  all of this happening to the soundtrack of a local AM radio station on the car radio.  A sense of excitement preceded these trips followed by exposure to tacky tourist attractions, mom & pop roadside motels and diner meals along the way.  It was true adventure and the visuals that were brought home were in the form of free postcards from motels, vibrant, illustrated state window decals and free maps that gas stations provided for the asking.  Those maps gave me a sense of direction and a platform tray to eat my french fries on. 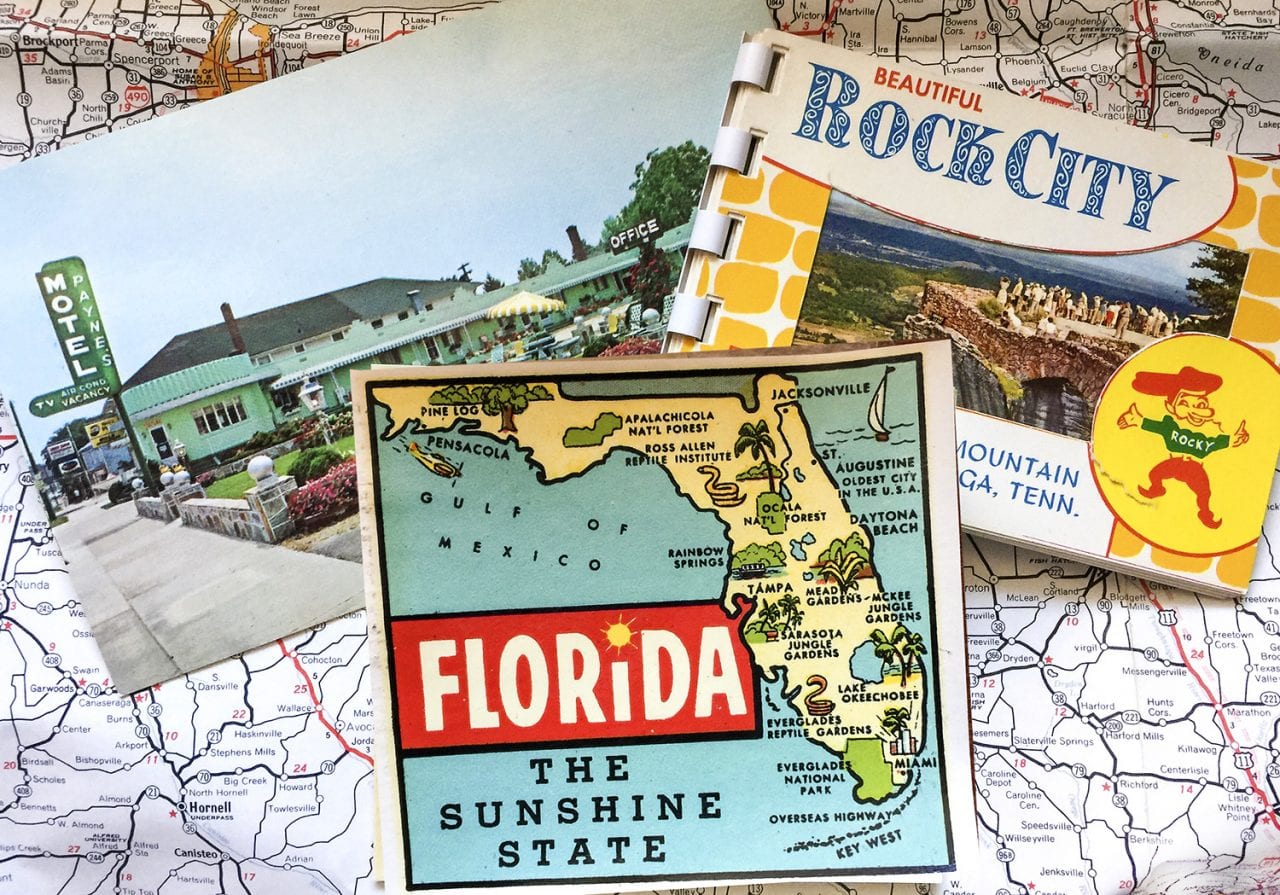 Mementos from the road.

Transparency film was the standard for professional commercial advertising photographers as I entered the field in the late 1980’s.  Most jobs were shot on 4 x 5  or 8 x 10 sheet transparency film.  Prior to turning professional, my hobby film of choice was black & white or color negative film.  We didn’t have a slide projector so negative film was the logical choice, to drop off at the corner drugstore to have 3 x 5 (or square from 120 film) prints made.  Enter View-Master.    View-Master is the trademark name of special-format stereoscopes and corresponding “reels” which are thin cardboard disks with 7 stereoscopic 3-D pairs of small color photographs on film. You could buy them in the photo department of any store, truck stop, national park or tourist destination.   Most were travel themes. Viewing was done through a hand held plastic stereoscopic viewer.   This was another visual pleasure growing up, bringing three dimensional images of far away places , TV shows and cartoons into my hands. 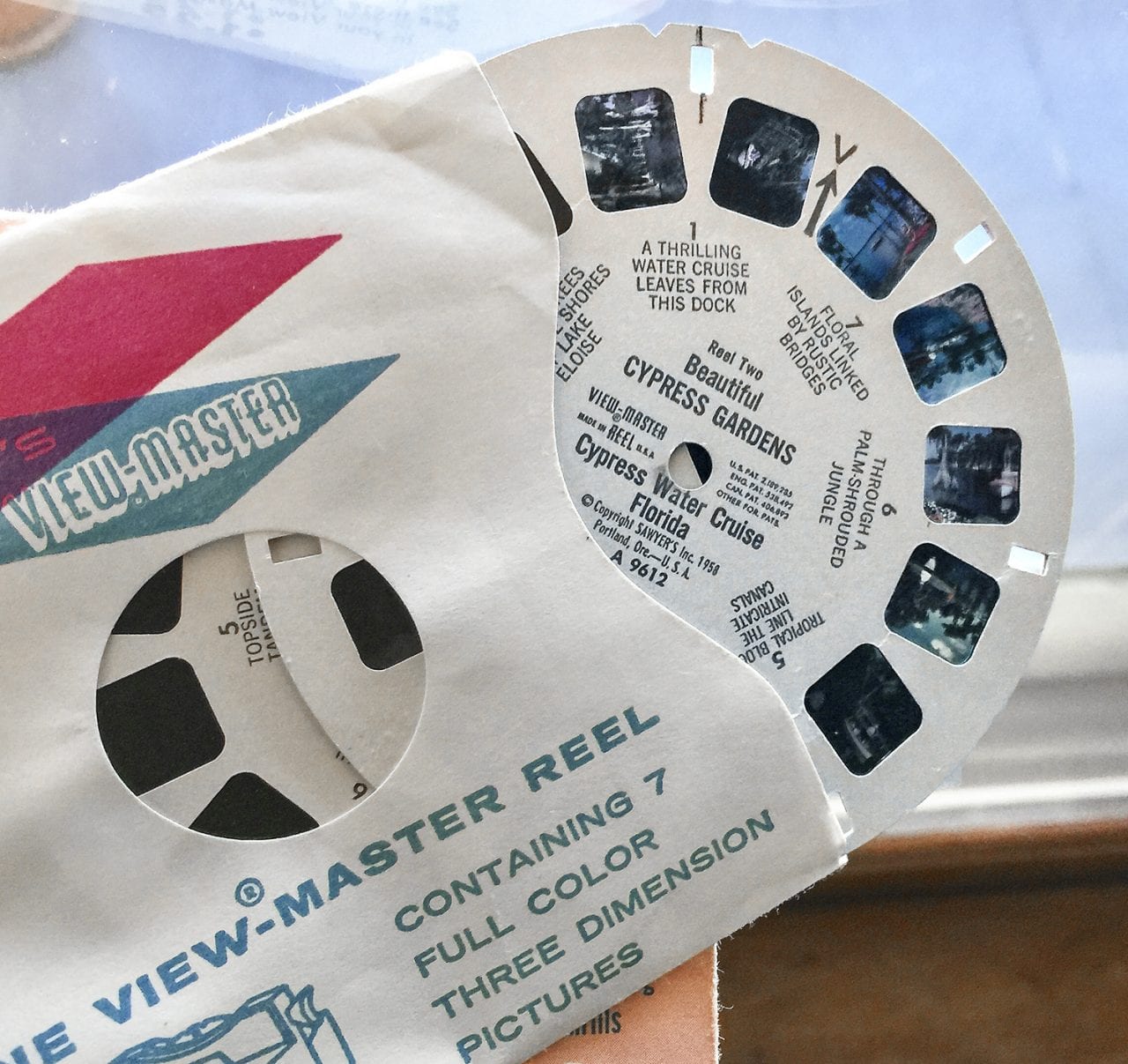 What can I say about Bruce Springsteen’s music that hasn’t already been said or written about?  All I can say is Bruce’s Born to Run album was an inspiration to move to New York and start something for myself.

Inspiration to get out.

Working at Whitehurst Studio in NYC provided me exposure to a photographer who’s work I had grown to admire as I saw what influenced him.  William Whitehurst introduced me to the work of The Quay Brothers.  They were masters at stop motion animation, small scale set design and puppetry using found objects.  Written description falls short when relaying the mood and odd appearance of their films.   Here is a link to get a feel for it.  Click on the link, It’s worth checking out. 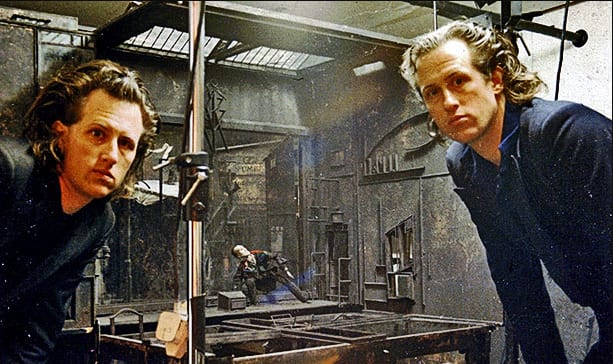 The International Style in architecture emerged in the 1920’s giving new emphasis to the expression of structure and mass, forsaking the applied ornamentation of previous architectural movements.  While living in NYC during the 1980’s and 1990’s, I passed these buildings daily and at times, stopped on the sidewalk,  looked up and admired the architect’s simple use of glass and steel.   These buildings represent, for me the exemplary  massive, straightforward structures with their random glowing office lights at night that says:   BIG CITY.  Growing up, the big city depicted in movies, TV shows, cartoons and photography  was scary, exciting and beautiful.  The New York of the 1940’s and 1950’s held all the allure.  It still does.

The big city at night. 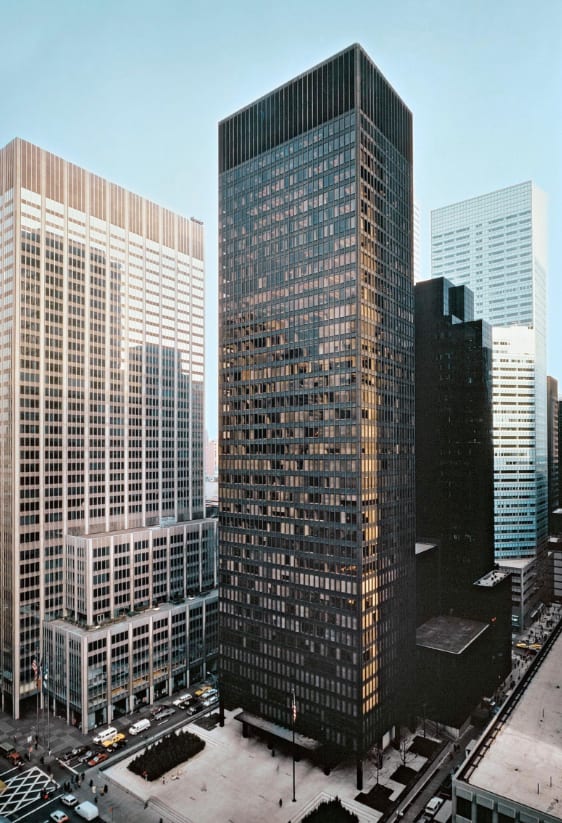 I loved these things and bought many-a-pack from the corner drug store.  The images on the cards are memorable to me today both in the sports and non-sports categories. 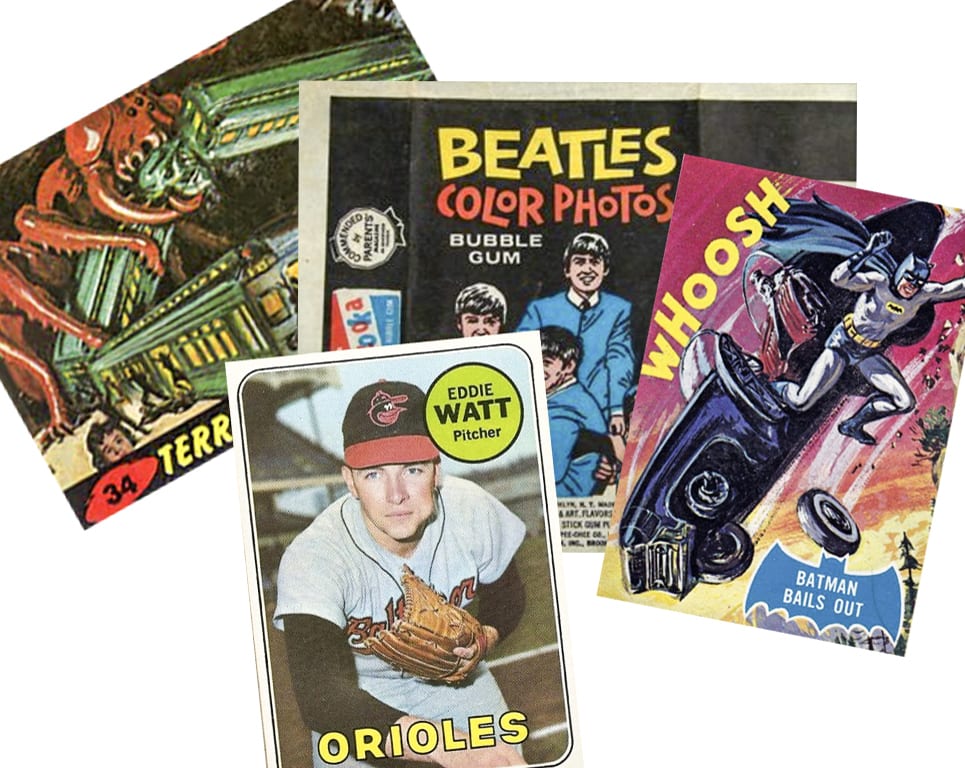 The illustrations and photos on Topps bubblegum cards made indelible visual impressions.

The risk of languishing and romanticizing in the past is a real temptation.  The challenge to stay attentive to new influences, keeping an open mind to new experiences and people is key to maintaining enthusiasm for my profession.  To live in the moment, to watch, to listen and to allow this rich, beautiful world to affect me as a photographer is a lifelong goal.