In Search of Old Las Vegas 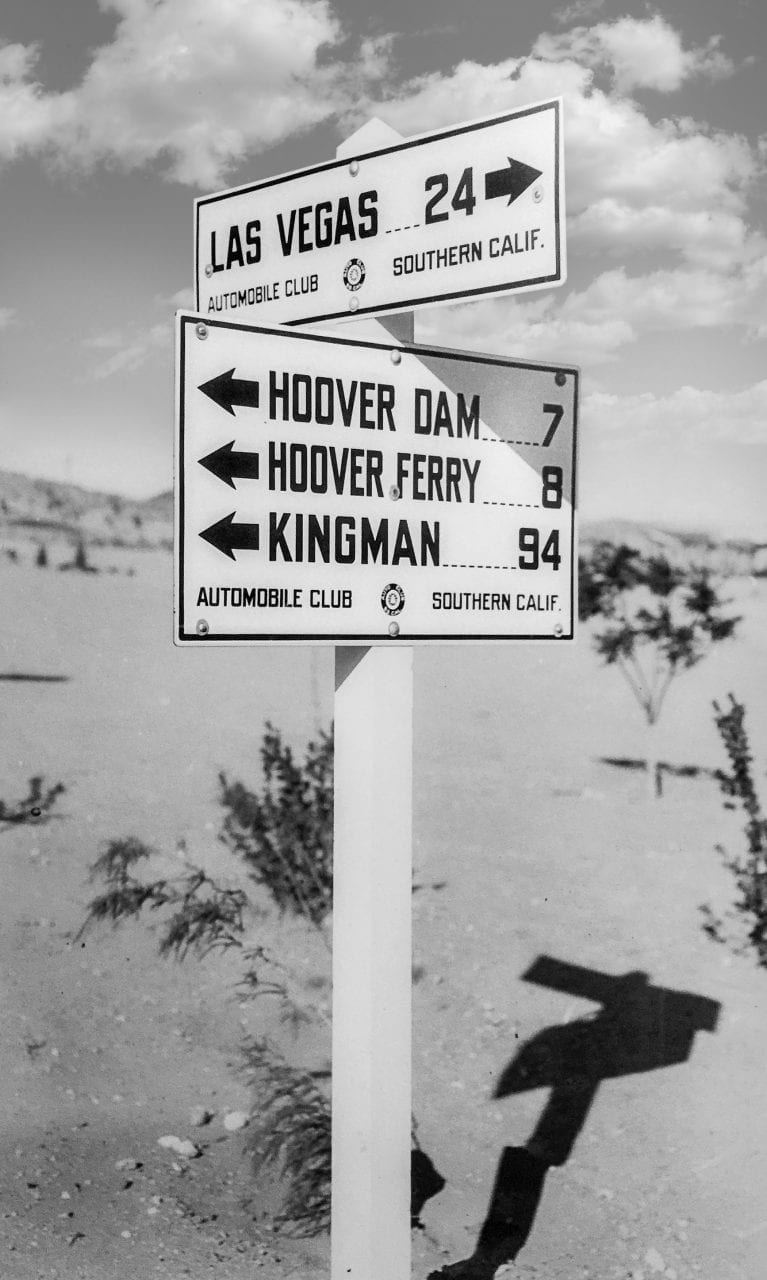 Las Vegas is a city of constant change. If you have any nostalgia for the Las Vegas of the 1960’s or 70’s and would hope to see it today, good luck! The strip is unrecognizable today when compared to the strip from 1970. There are wonderful books to show this comparison as well as Youtube videos. A major component to “Old Vegas” is neon signage, and much of it is saved from long gone hotels in a large outdoor lot at the Neon Museum north of Fremont Street. 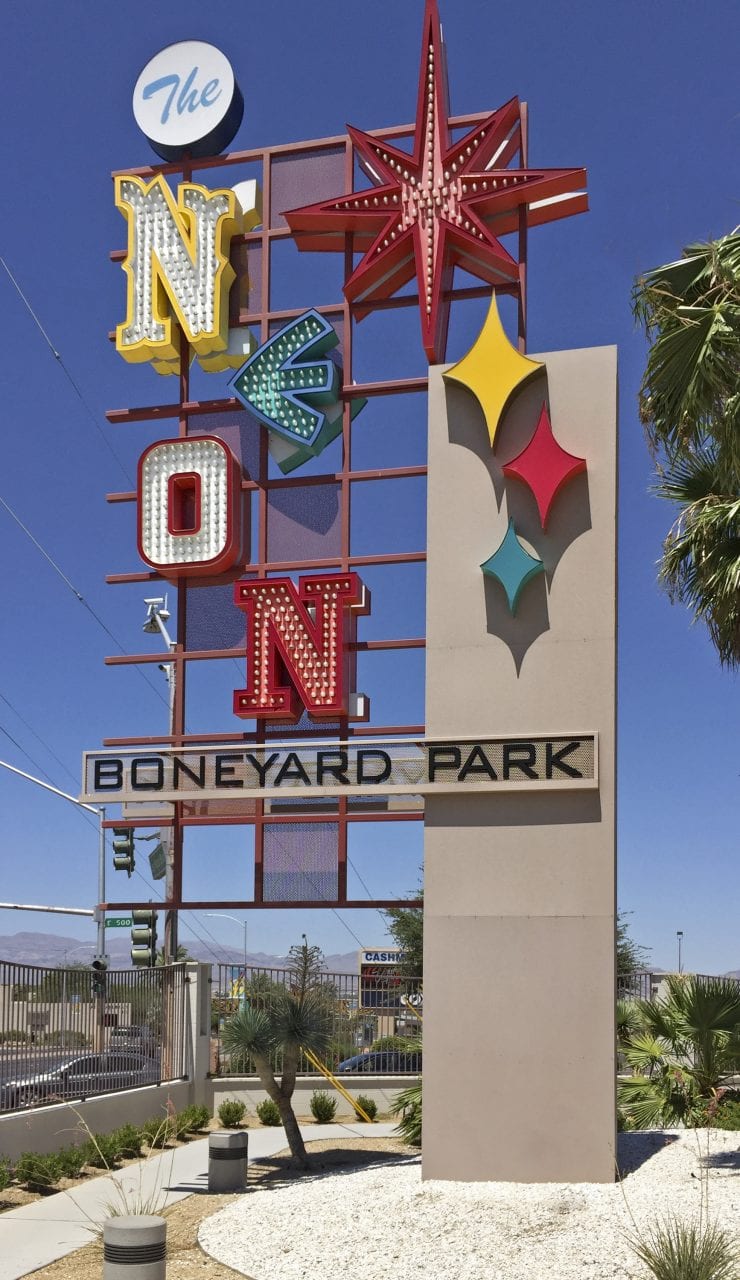 My interest in roadside archeology has it’s roots in family vacations, traveling to tourist destinations and staying in local roadside motels.    Las Vegas was visited a number of times in my life and this last trip was an attempt to find something of the old city still operating or at least standing.   Circus Circus’s neon clown is as brilliant as it was when it opened in 1968. 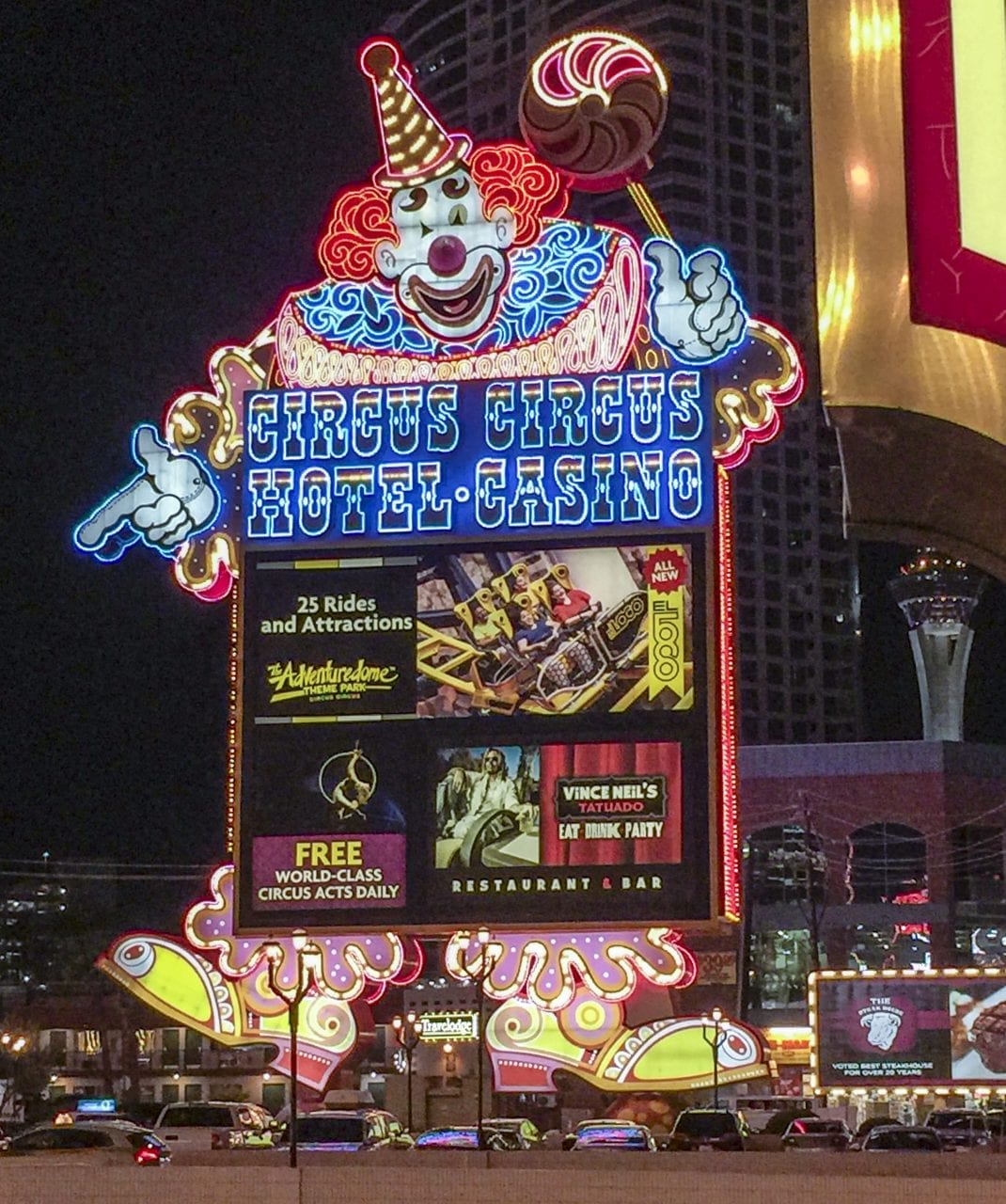 There were other vintage neon signs visible toward the older downtown area near Fremont Street such as this one built in the late 1950’s or early 1960’s.  To see this motel still operating on the strip is rare. 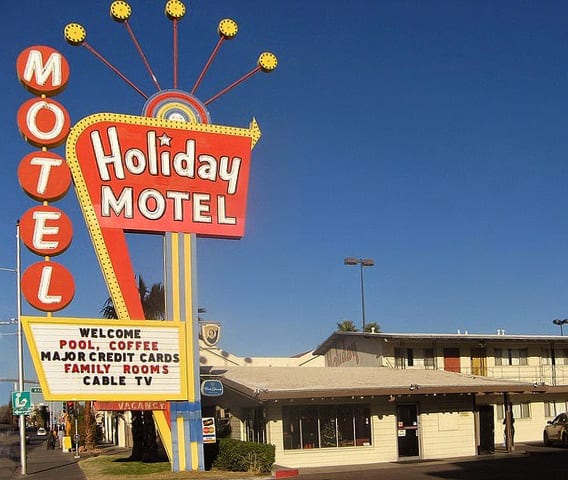 The Neon museum is located on North  Las Vegas Boulevard, about 5 blocks north of Fremont Street.  To visit, one must reserve a slot for a tour. Tours are given during the day and in the evening.  I secured an 8PM time slot, thinking the desert sky would be in transition from dusk to night.  I was right. 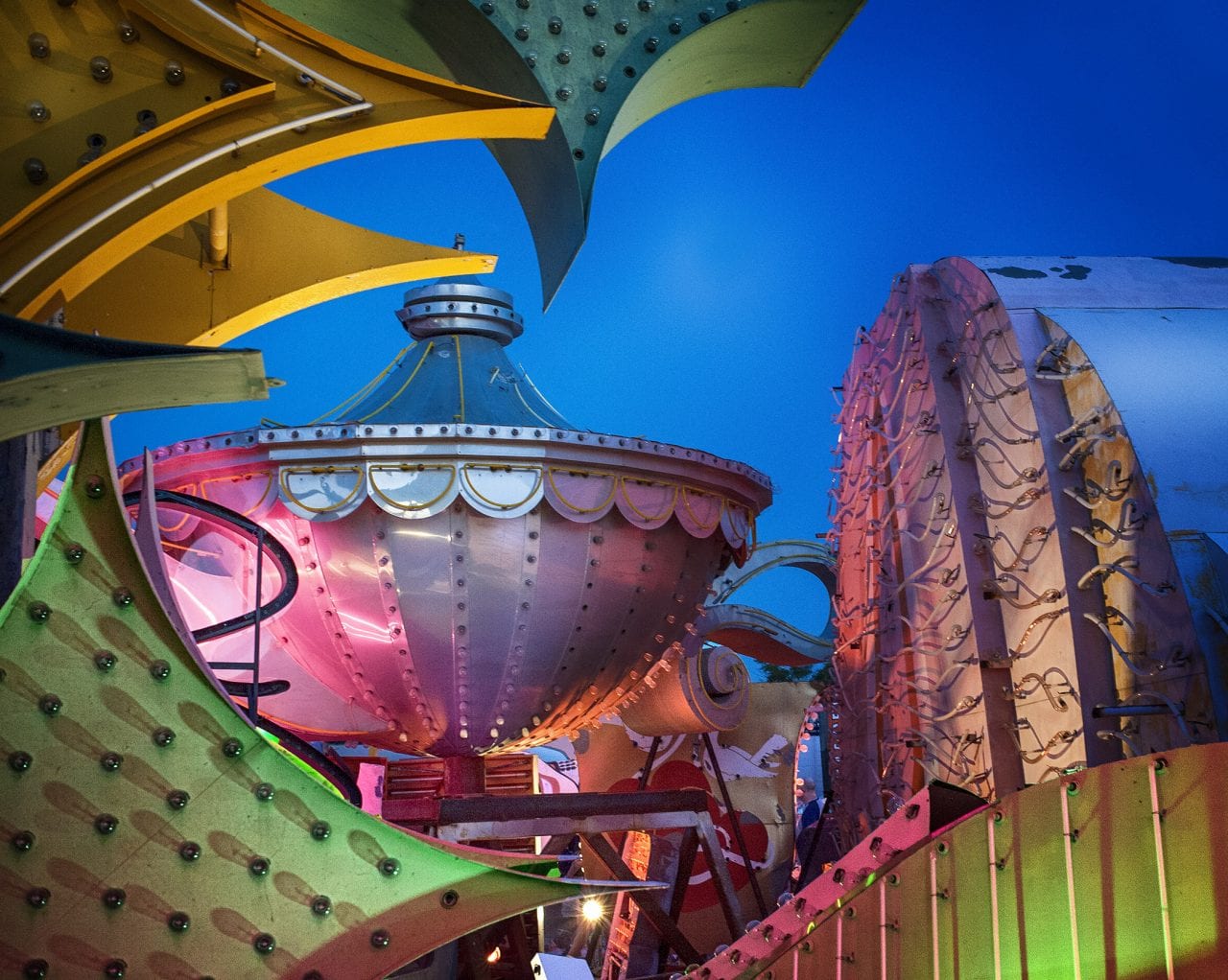 Man made beauty at every turn.

The Museum is in a large outdoor lot adjacent to the lobby/visitor’s center, (the visitors center, being the restored shell from the defunct La Concha Motel built in 1961).

At 8:15 PM , looking down one of the corridor’s, with the decaying vintage signs lit by spotlights and some of the original neon, the scene looked like a nightmarish rundown carnival from a Twilight Zone episode. 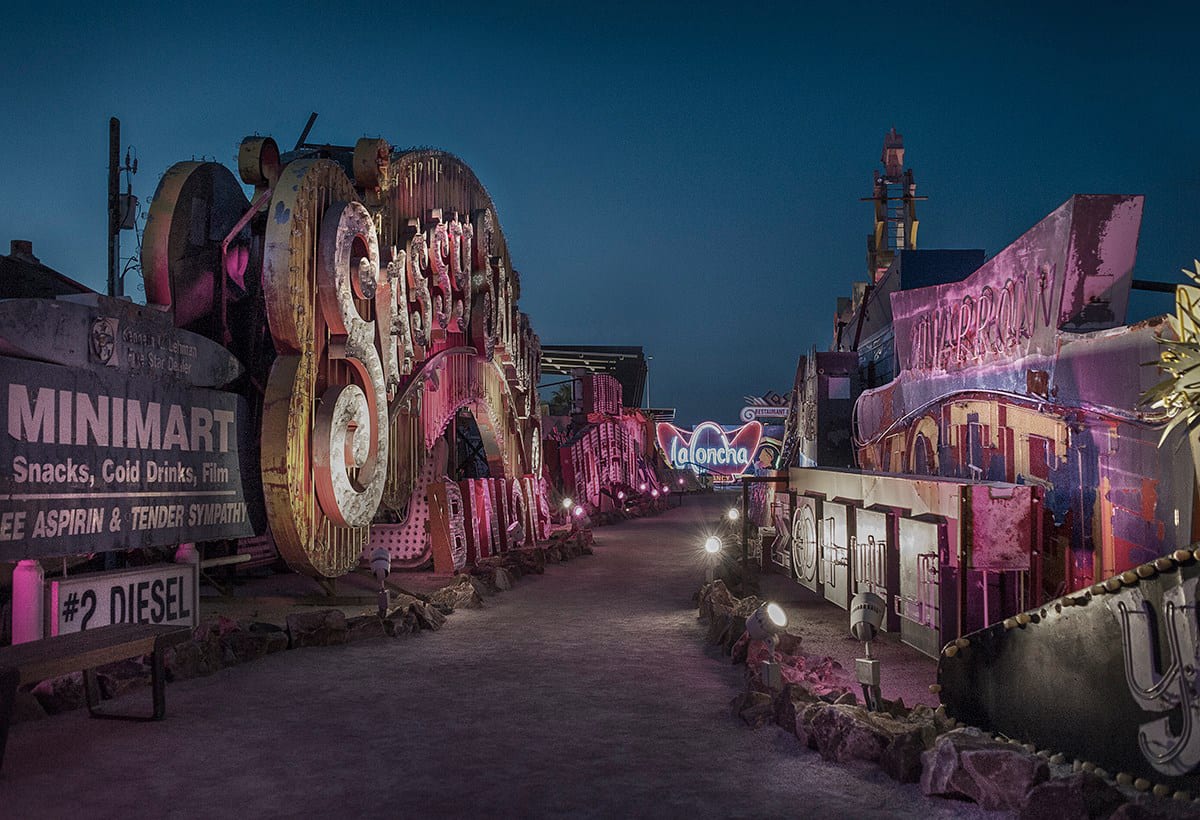 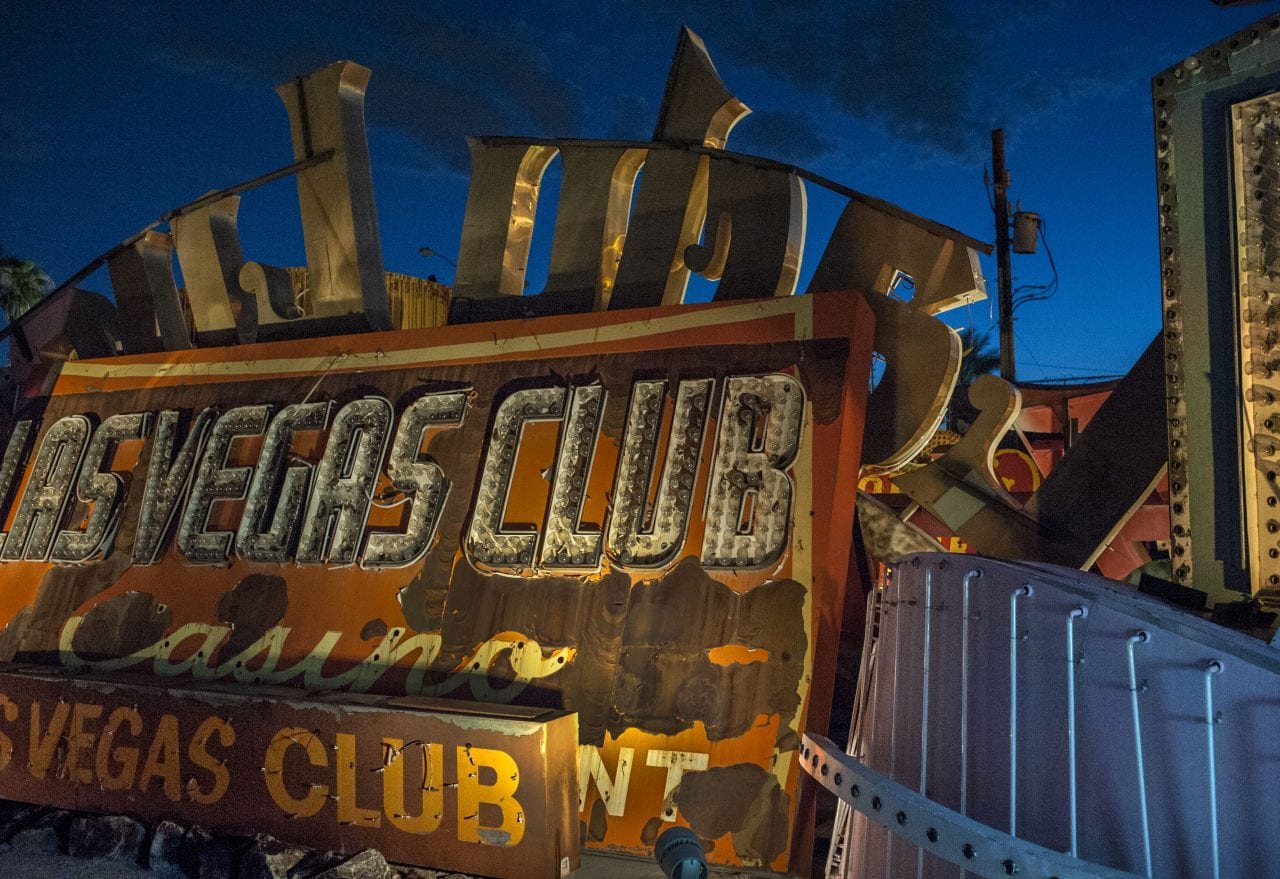 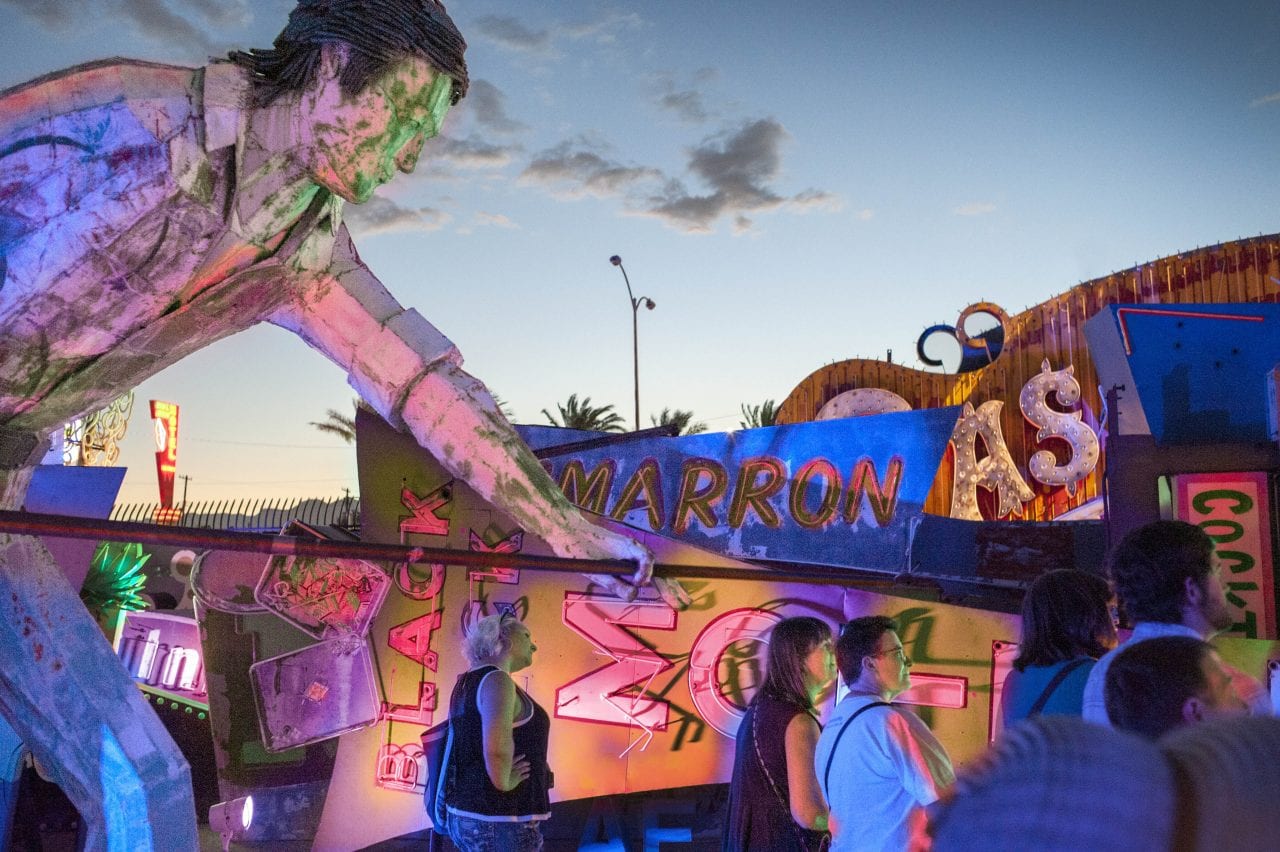 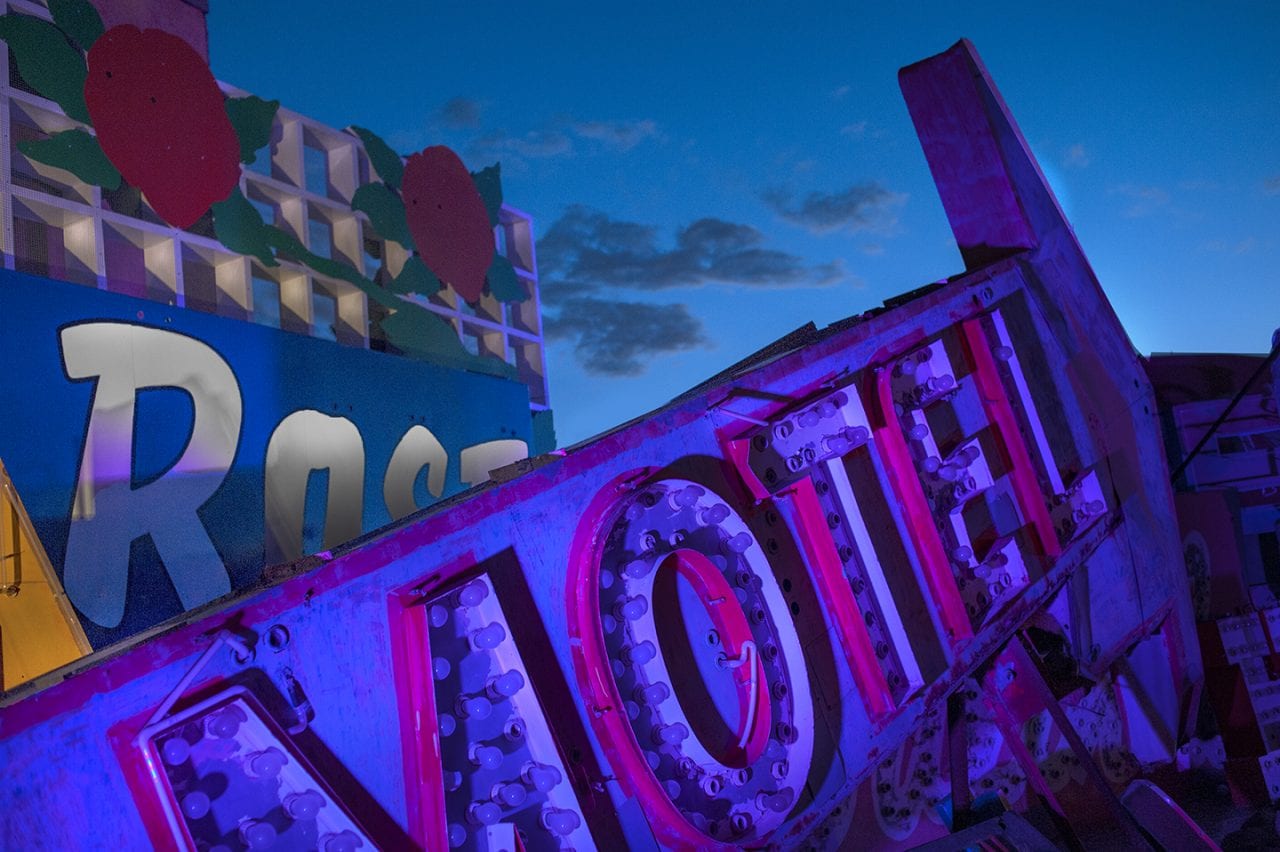 When Photographing these remnants from extinct business, I was shooting with my Nikon D700 with a prime 35 mm auto focus lens.  I had the ISO set to auto.  (The range was ISO 800 -3200.)  I was shooting in manual mode, usually at F2.0 @ 1/30th of a second, all hand held.   I had the metering mode set to Matrix.  Sometimes, for fun, I used the pop up flash and dragged the shutter, adjusting the flash to balance with the ambient light. (I did that on the pool shark sign.) 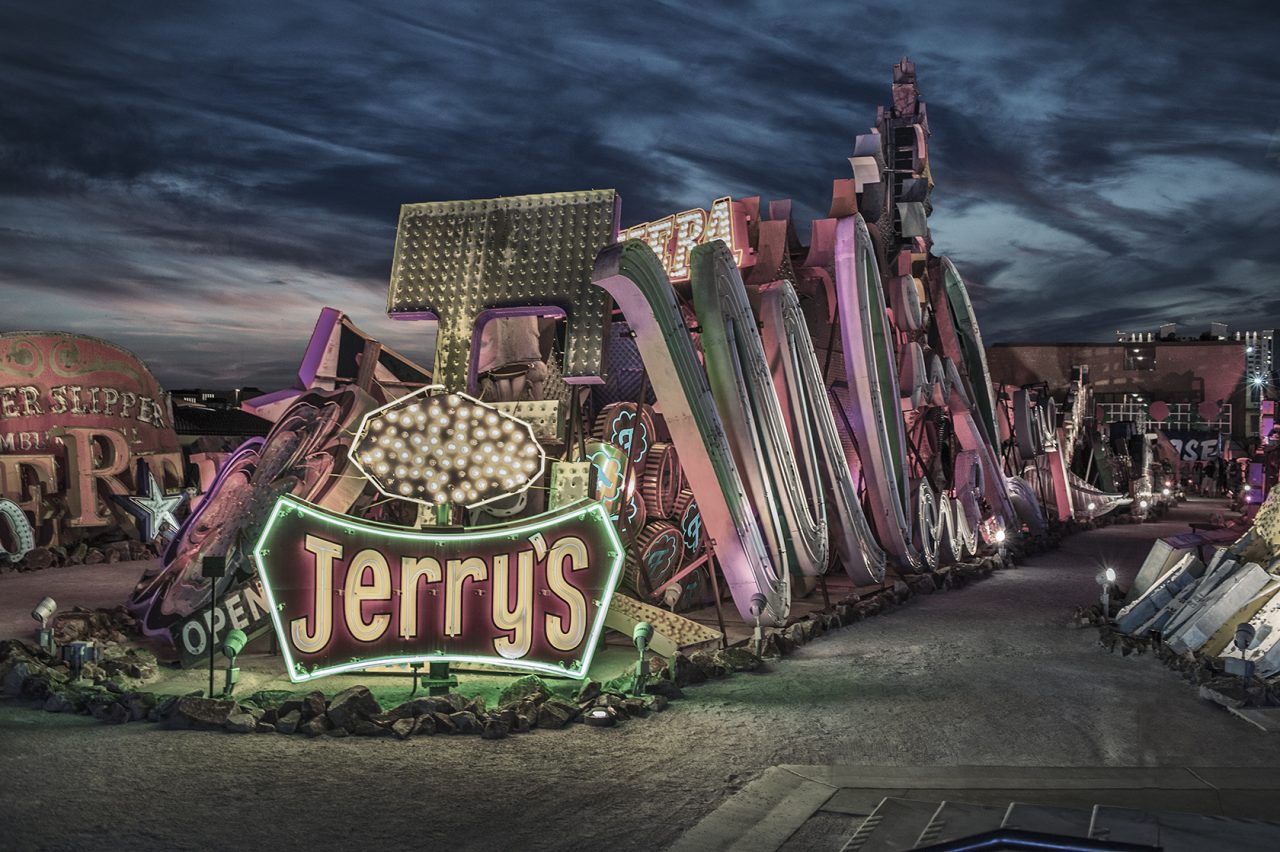 Post production is where the fun starts.  I usually, adjust my shadows and highlights in Adobe Bridge.  I bump up the luminance and clarity, then I open the image in Photoshop.  In Photoshop, I select certain areas with the lasso tool , change the hue, apply a layer mask , fill with black and then “paint” back in the areas I want the changed hue to show through.  Finally, I run the flattened image through Nik HDR filter at about 30%.  Depending on the image, I may pull back on the luminance.  It’s all pretty subjective.  For instance this same scene above takes on a darker, foreboding look  when converted to black & white. 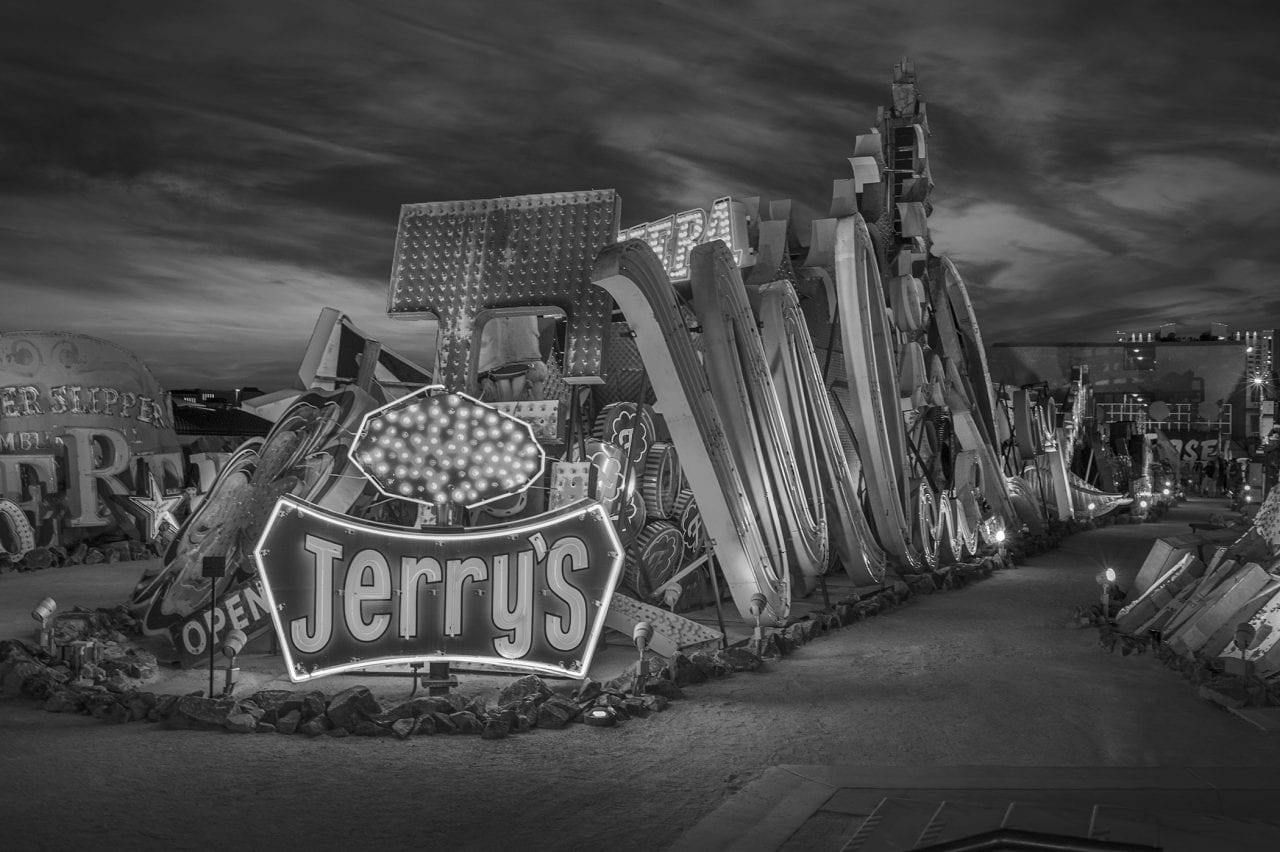 (I forgot to mention, I also replaced the sky on this image with one I had in my files.)

After my visit to the neon museum,  I walked 7 blocks to catch the bus back to my hotel.  On the way back, I stopped at a food cart for something to eat.  The lot was illuminated by a utilitarian red neon sign for tires.  Compared to what I had just seen at the museum, the neon was nothing special,  but the food sure was!  I went back a second time for another round of soft shell  tacos later in the week. 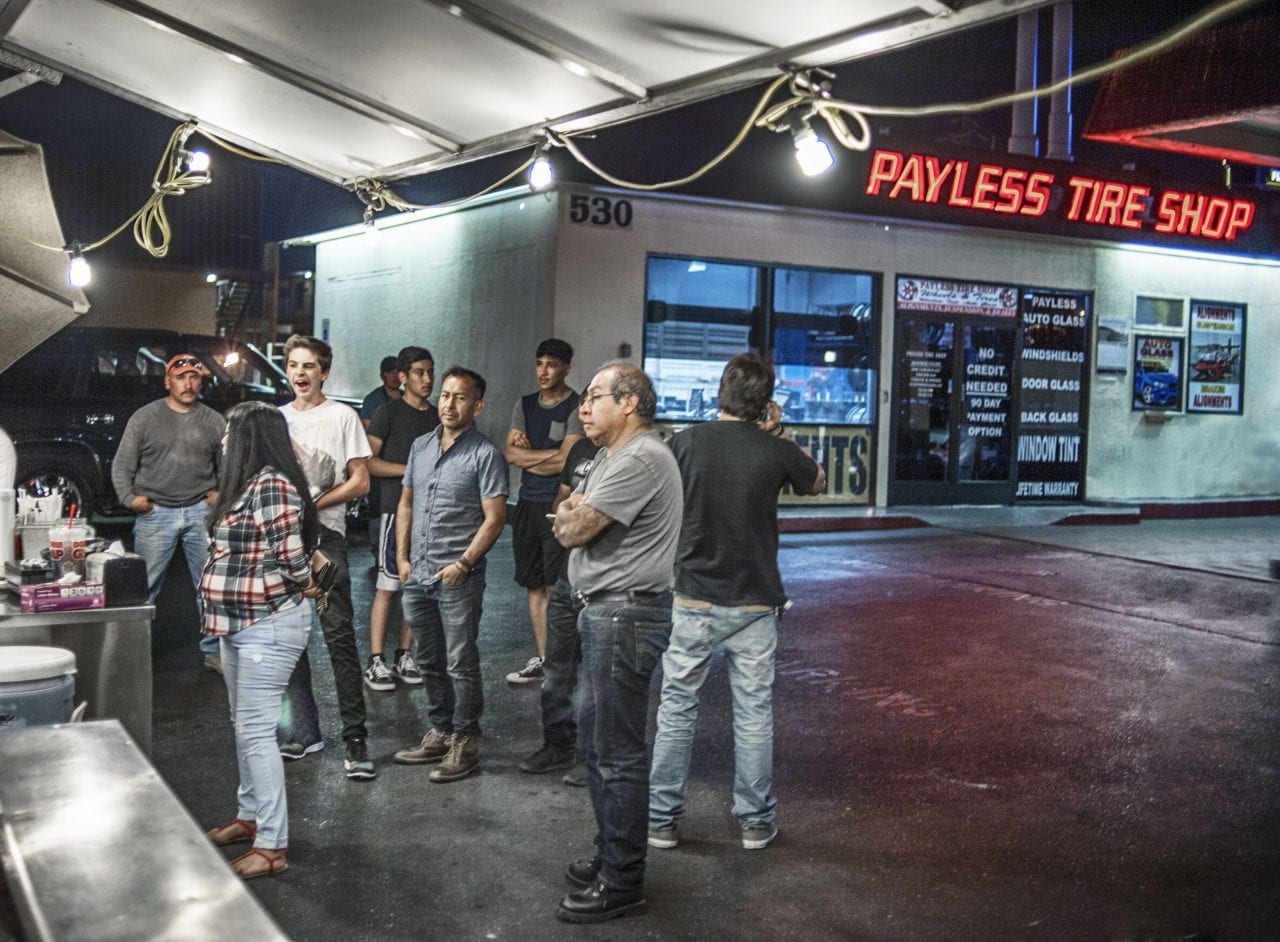 Great Food on the Street.