How to Photograph Groups in Business 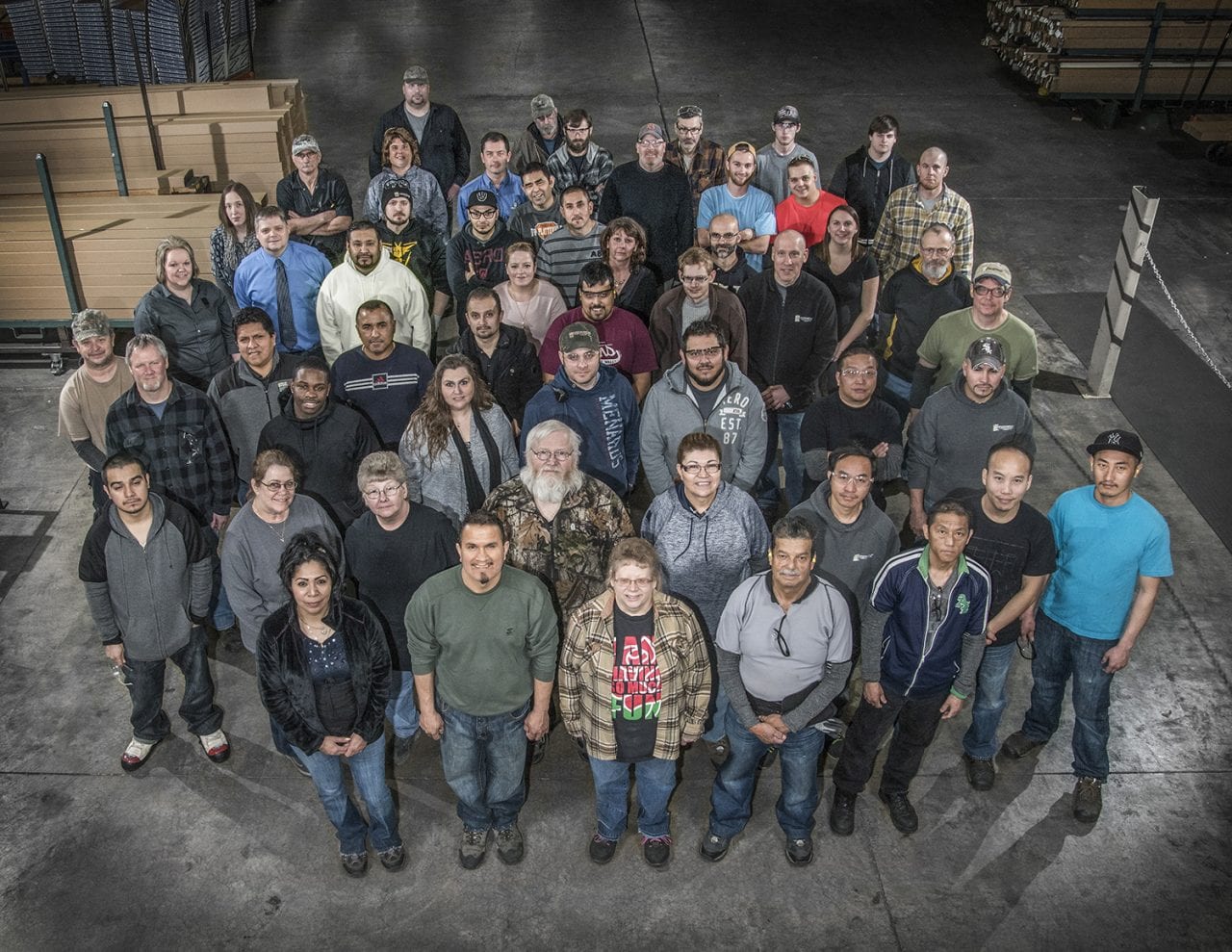 Typically, when I am hired by a business to shoot in their facility, a group photograph will be requested at some point. It may simply be the owners of the company or various department heads.  Many times it will be the entire staff.  Let’s take a look…

When I go into an industrial environment with my camera and portable lights, I make sure I can carry everything by myself from location to location.  That usually means two battery powered portable speed lights (powered by AA batteries)  each  mounted on a Pocket Wizard radio slave receiving unit, both mounted on a light stand.  Basically, I carry one light stand in each hand ( with the speed light and Pocket Wizard mounted on top).  My camera is hanging at my hip, secured on a Black Rapid Strap, and a zoom lens (24-135mm) mounted on the camera.  I stuff a small white umbrella in my back pocket in case I want to diffuse one of the strobes.  With this set up I can light most any localized situation, utilizing the ambient lighting in the plant and augmenting my subjects with my speed lights.

This set up does not work for photographing large groups of people.  When, in the middle of the work day, at the request of the marketing manager, all the employees gather in the warehouse to have me take the BIG group photo, I must be prepared.  Usually, production stops in the plant and I have about 10 mins to get the job done.  In order to accomplish this, I need to inform my contact person, (who hired me ), that I will need  25 minutes to set up my 4 portable speed lights on the shop floor, (same ones I use in the plant to shoot everything else, just adding two more), and one light next to me clamped to the ladder or lift.

I place two speed lights directly in front of the camera on either side about 20 feet apart aiming at the area where the group will be.  I place 2 more lights at the outer edge, middle of the group, one on each side aiming in toward the back part of the group.  These 2 “midway” lights light up where the front lights begin to fall off.  I make sure all lights are out of the frame of the camera and up high.  If the area where I am shooting is bright (LED’s or bright fluorescents), I will put an umbrella on each speed light (to soften shadows on the faces), jack up my IS0 to 800 and use those bright lights along with my speed lights to illuminate the scene. 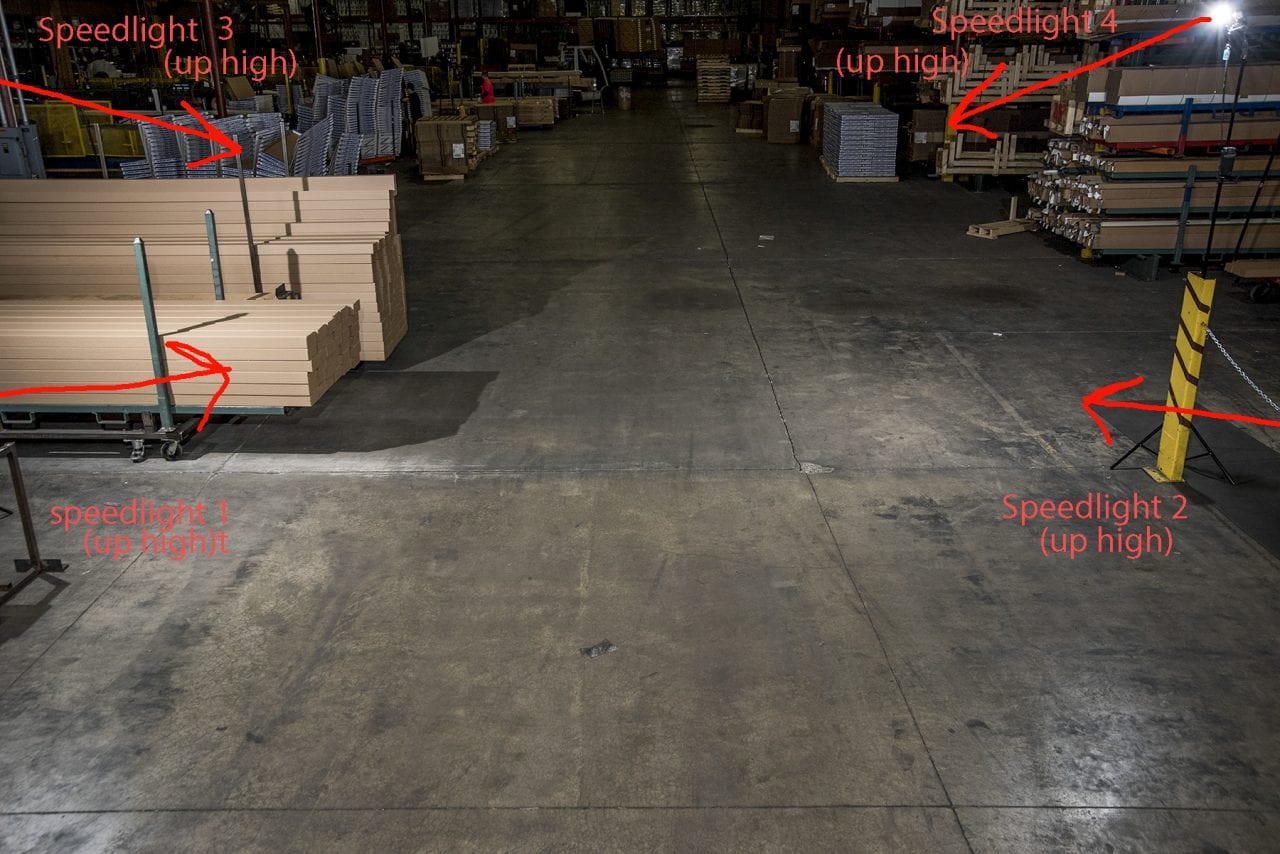 Basic set up for group of 50 people.

I will most likely be shooting from a tall rolling ladder or a scissors lift.  Often times I will clamp one more speed light on the rail of the  ladder or lift right next to the camera, aiming down on the group to make it 5 speed lights total all triggered with Pocket Wizard radio slaves. (no wires!)

So, the lighting is set.  The lift is in place and I am waiting for the employees to gather.  From this point on, it is all about crowd control. When everyone is present,  I thank them for being there and inform them that “this will only take about 10 minutes”.  I start to direct the shorter people to the front and taller people toward the back.  I mix women and men, clothing colors, managers and interns.  I try to create a pleasing tableau, as viewed from the top of my ladder.

As the director, I work quickly,  talk loudly and I try and stay loose and keep my sense of humor. .

From my perch up high with camera in hand, it is difficult to fine tune the group and direct people.  I have to be very specific in my description when I want to move a person  from one place to another.  Pointing won’t do it.  Everyone is a little self conscience and they wither at being pointed at: ” not me!”  When I connect with the person I  want to move, I say with a smile and an exaggerated nod of my head,  “yes you”!

I shoot about 12-15 frames.  Rarely will I get a frame where everyone’s eyes are open and looking good.  I anticipate swapping heads and/or eyes in post production to create the perfect image.  If I notice glare on people’s glasses, I will instruct the glasses to come off, shoot a few frames and use those glasses-less eyes to be the true eyes behind the frames in the final image.

When I feel I have what I need, I will give the “last shot” warning, shoot and say thank you!  Often times, I will shoot a frame or two while everyone is dispersing.  Out of context, those images can be interesting, for me because their self consciousness will have evaporated and if creatively cropped in post, there can be some authentic interactions. 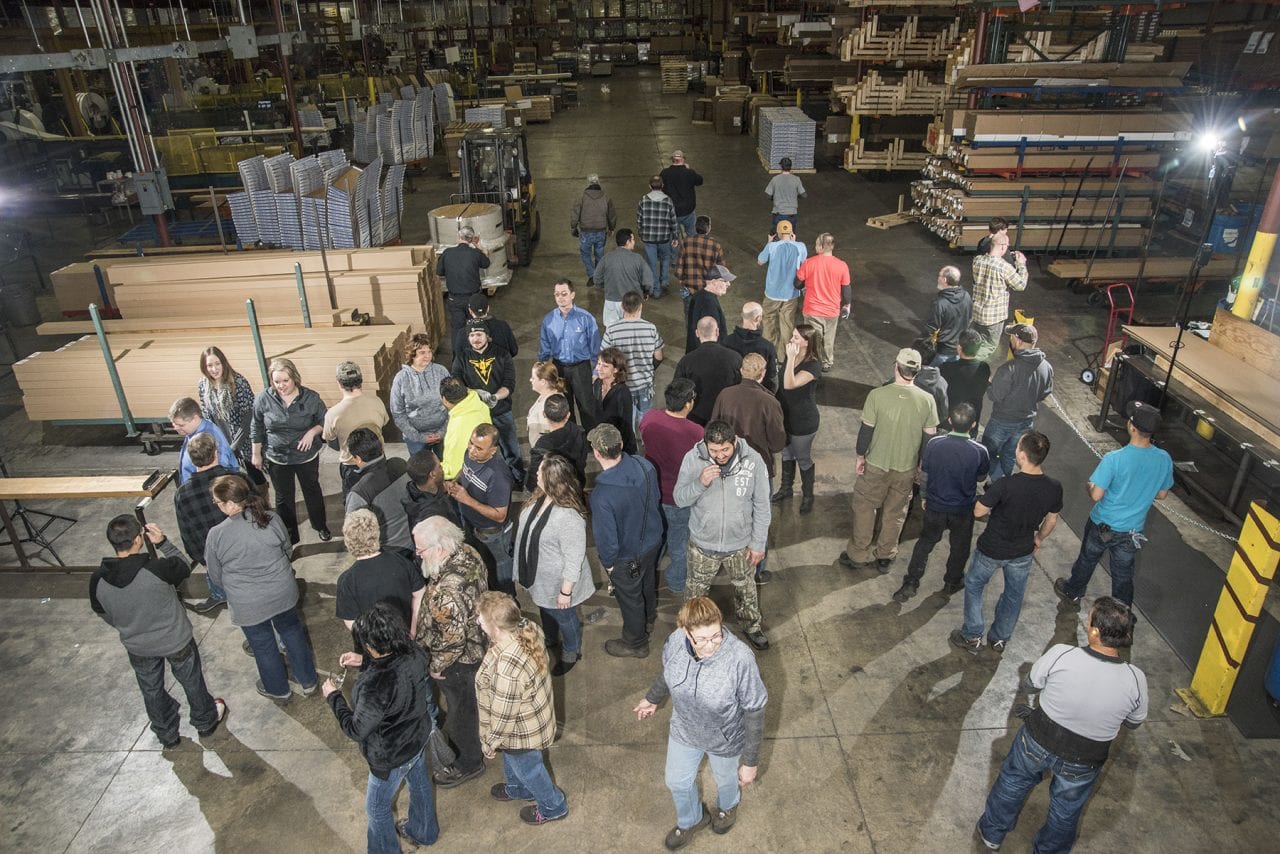 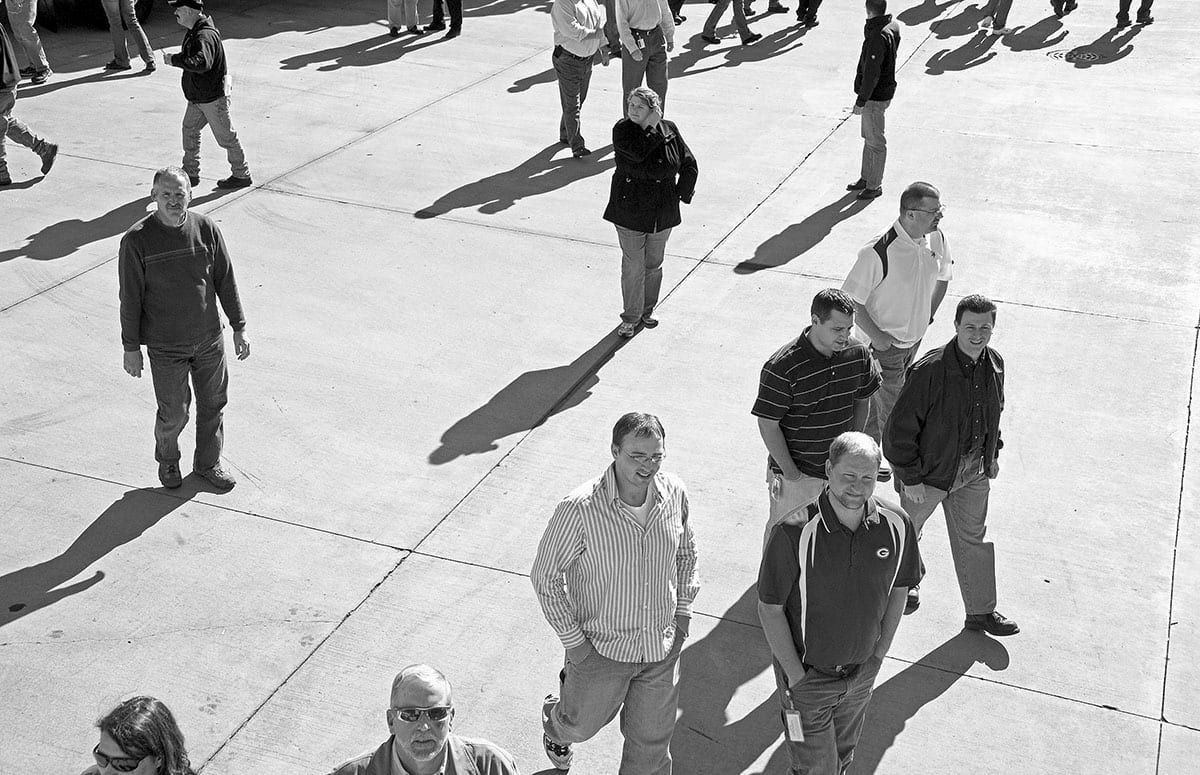 Cropped in on a dismissal frame and converted to black & white. 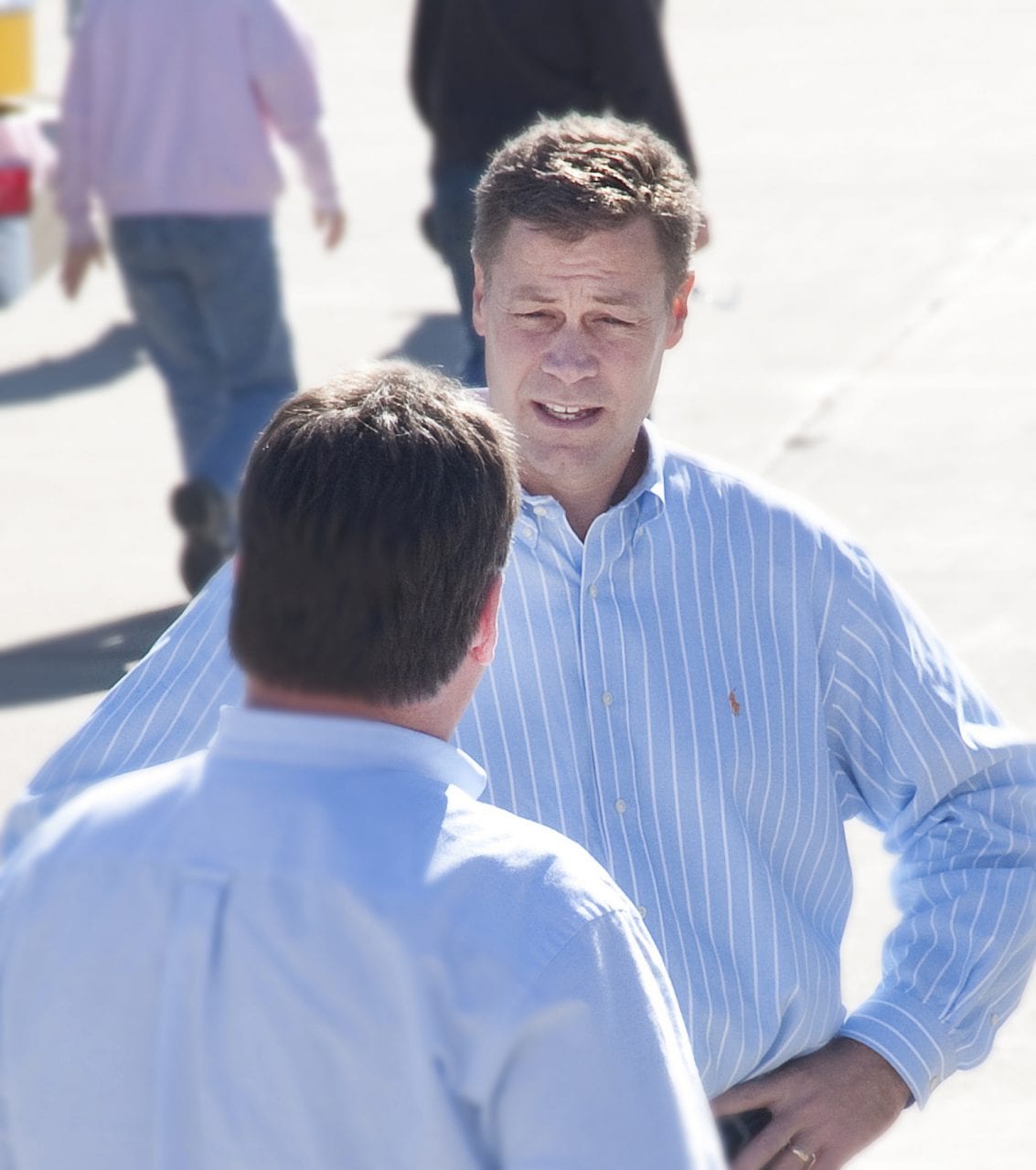 Thats it. In the span of 10 minutes, a basic group can be photographed with the proper preparation.

Finished product : All the employees for Appleton Supply Company

There have been a few projects where I needed  to communicate from up high on my ladder to a coordinator down below.  That can be done via cell phone.  I also have taped out or painted on grass to lay a template for a group that needed to be formed in a specific shape.  Those are always a challenge. 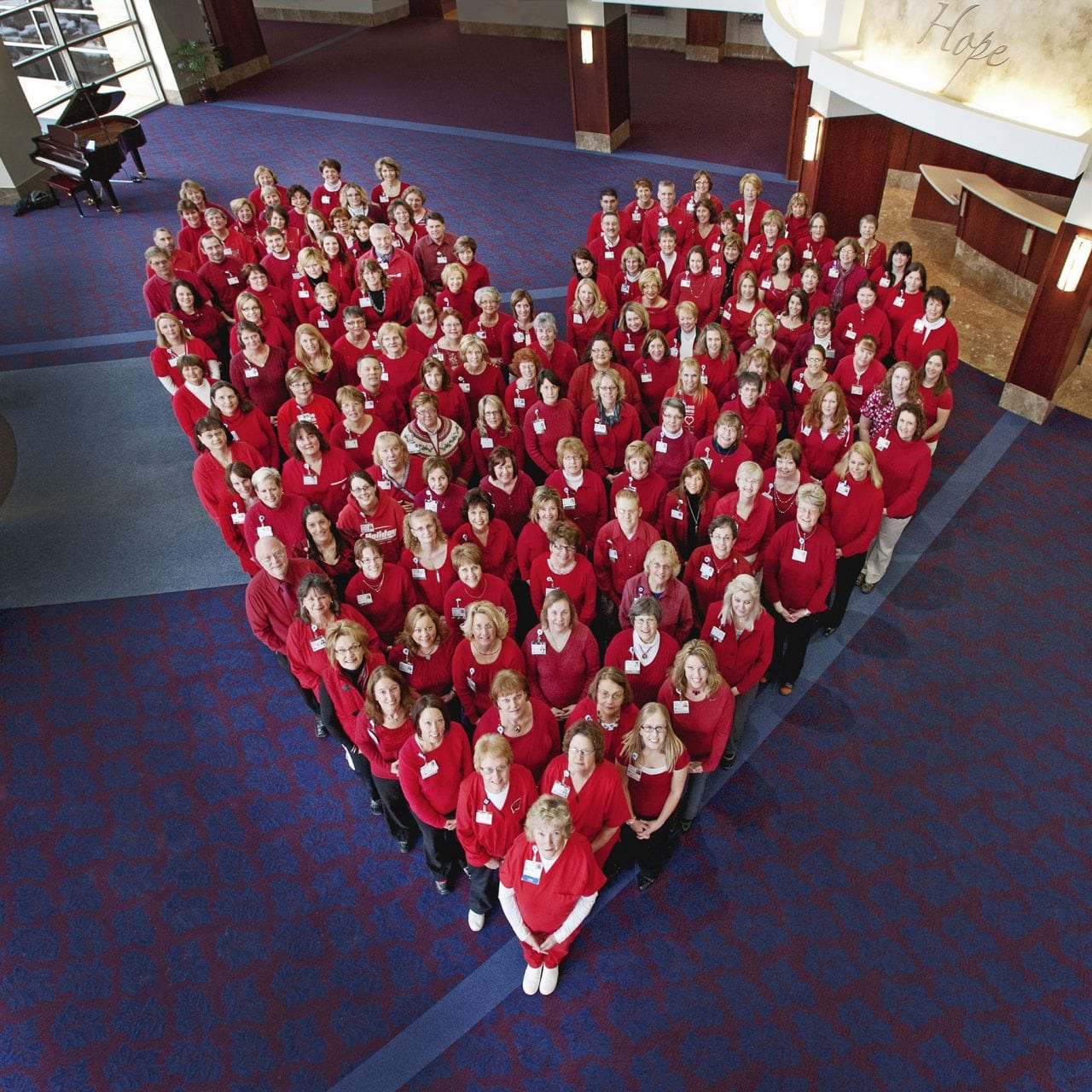 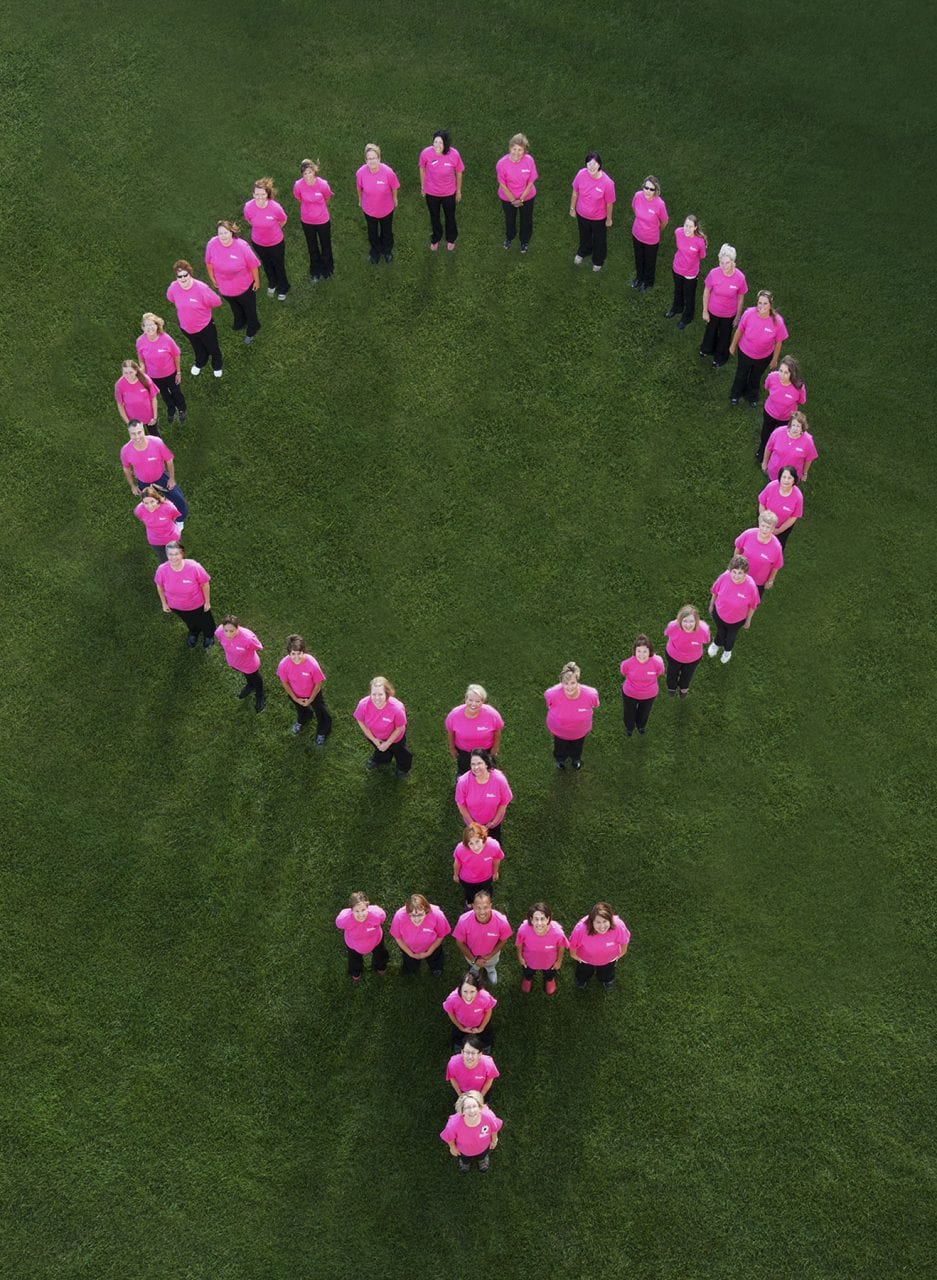 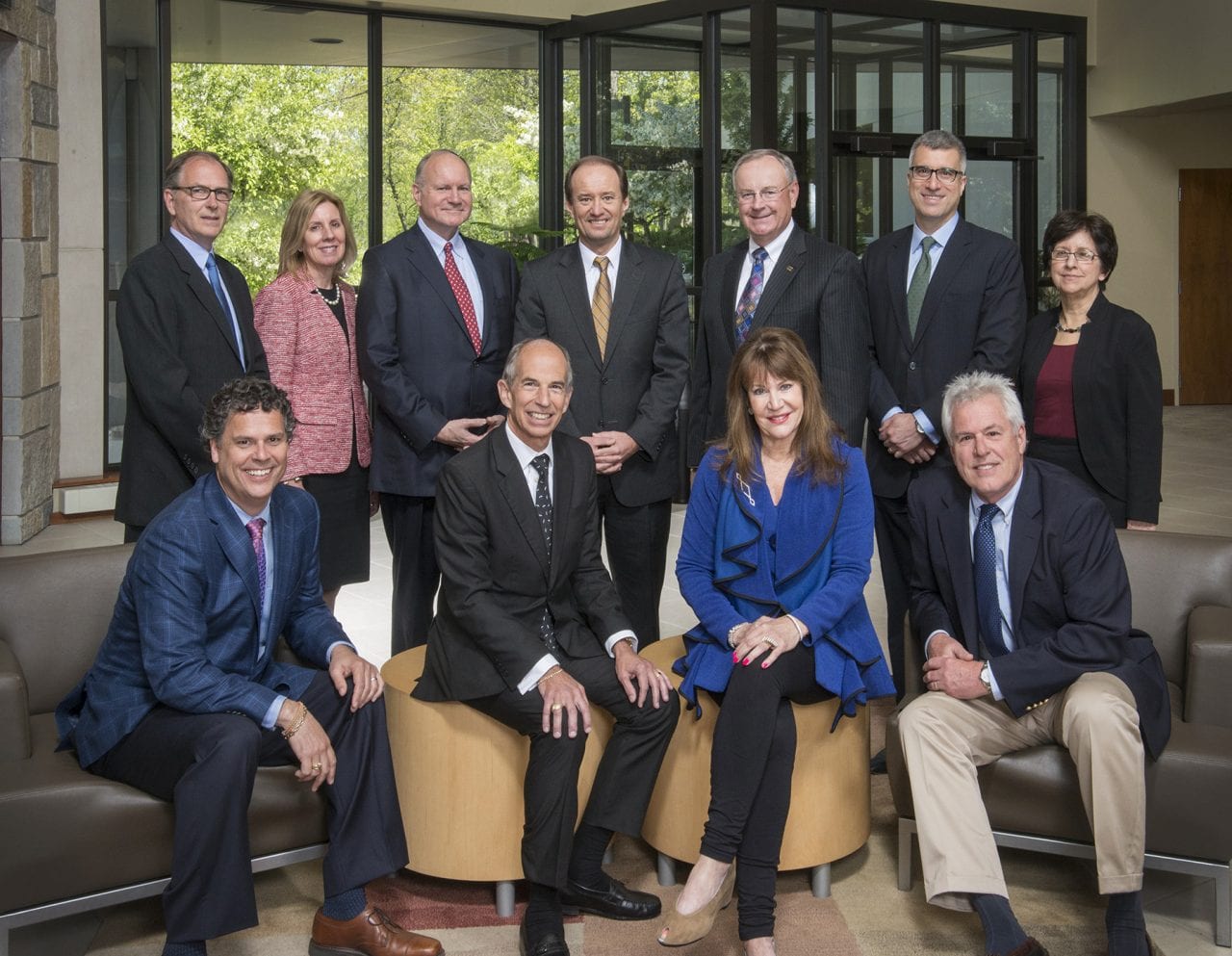 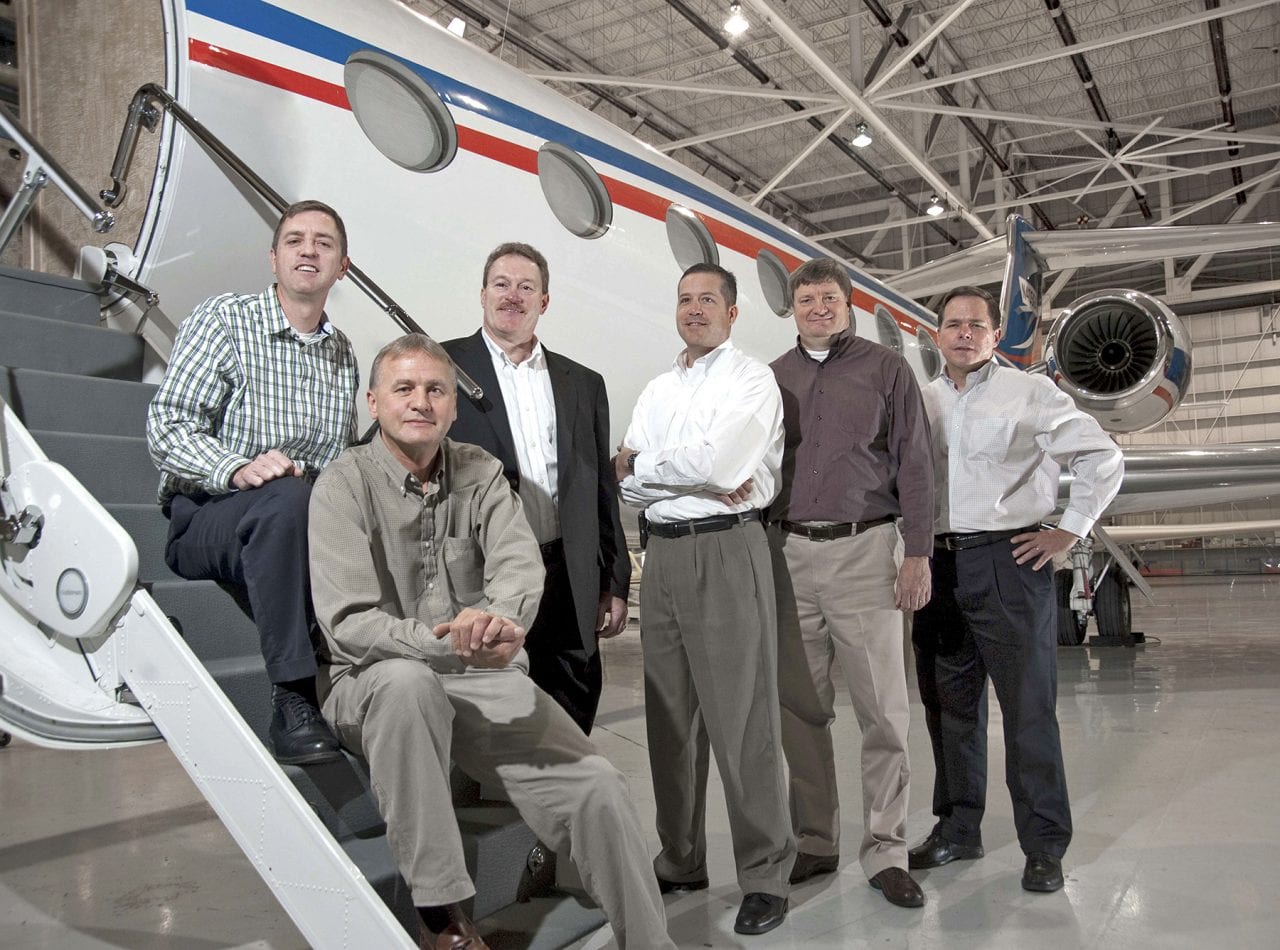 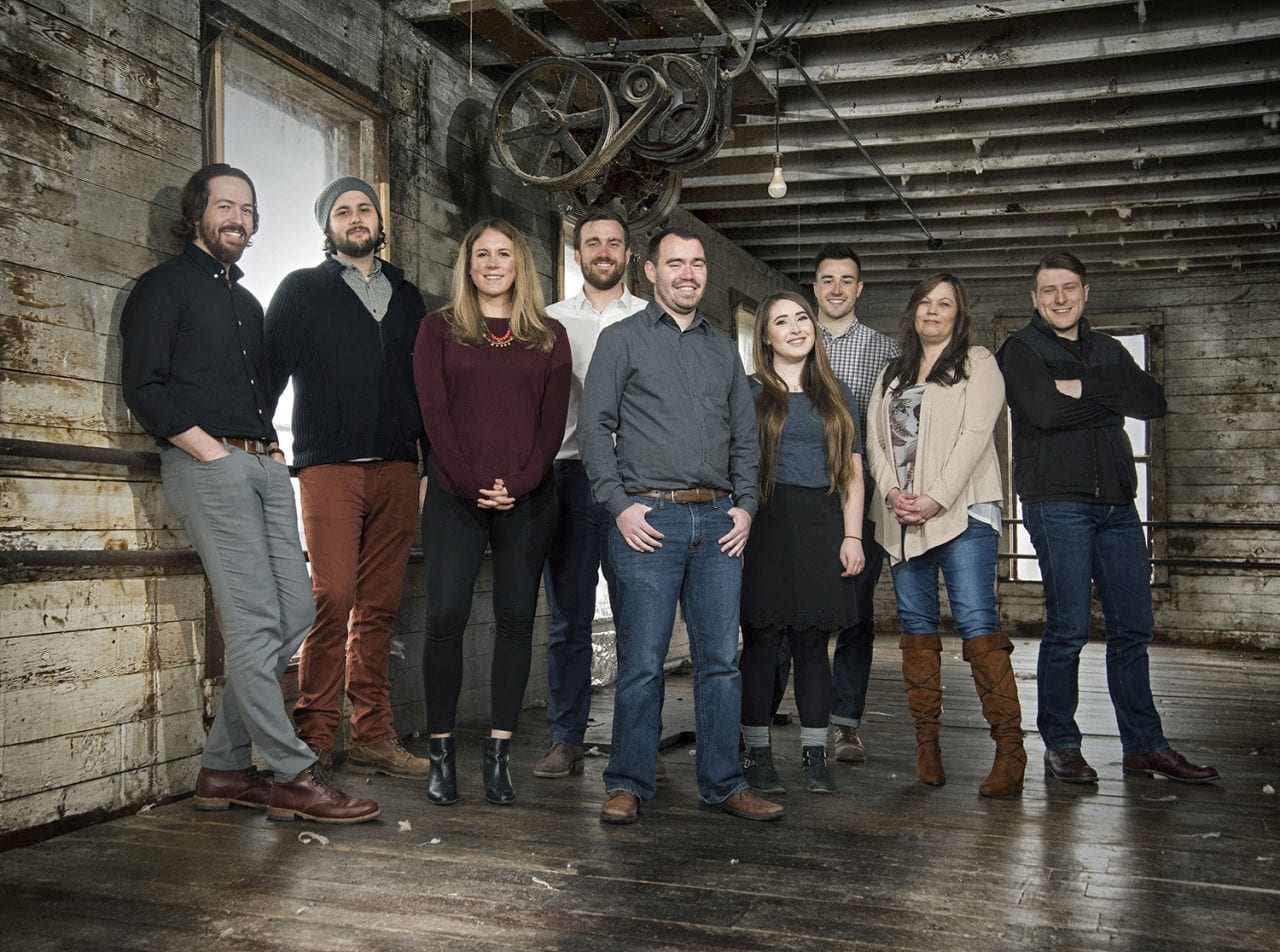 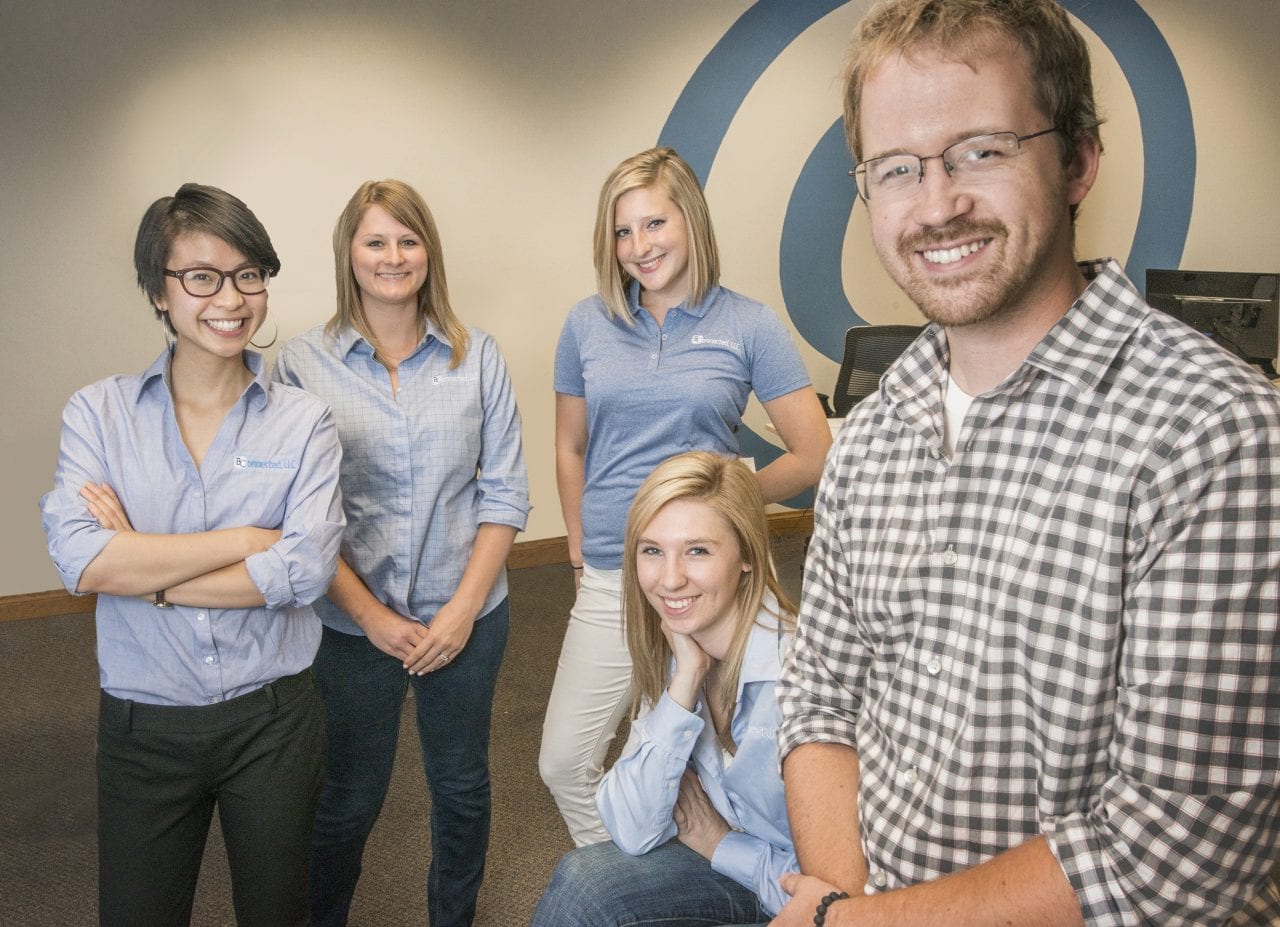 As you can see from the images above,  the type of business you are photographing  can dictate the environment and positioning of personnel.

The main ingredients to making a successful group image are:  Preparation prior to the group’s arrival (keeping in mind to set up lights and people in a way as to avoid harsh shadows on faces), the last thing you want is to troubleshoot in front of 50 people!, A firm, decisive command of individuals as you are placing them in the set up before you ascend the ladder to shoot, an environment, if possible, that hints at the company’s desired identity  and finally a sense of humor!  Try and make it fun. It will show in the final image.