Back in 2012, I was invited to document a cycle bar hop.  The owner of Island Flats Speed Shop, Joey Dishno, informed me of the annual event to take place on the near north side of Appleton. 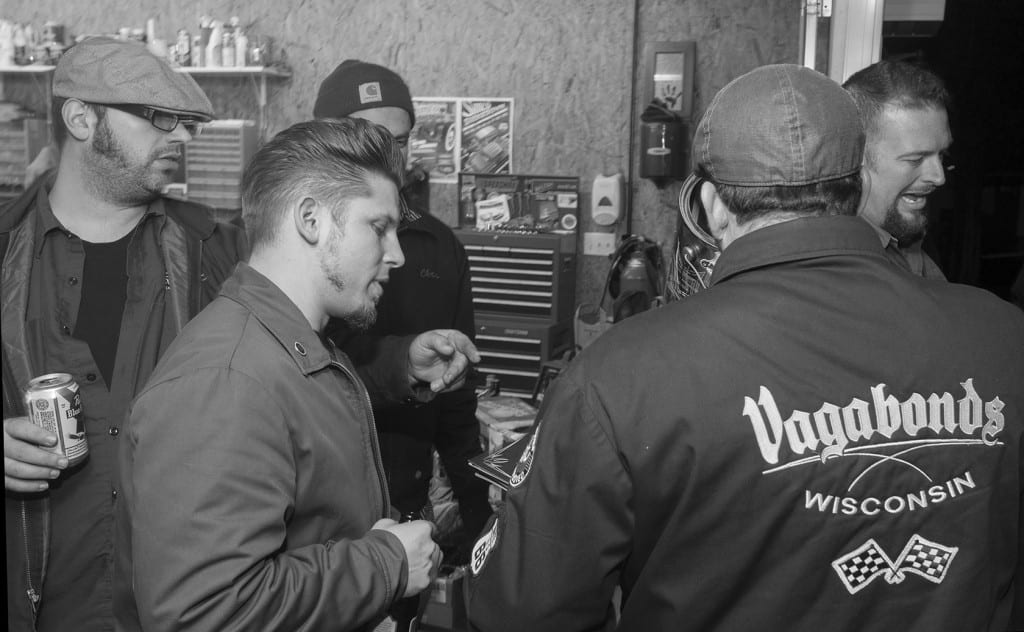 It sounded like there might be some pretty cool shots of monster Harley’s, tons of leather, tattoos, big dudes with beards and sunglasses riding their bikes from bar to bar, carousing outside each establishment till the wee hours.  I called my shutterbug friend, Pete and invited him to be the roving HLS for the night,  (Human Light Stand).  I packed plenty of AA batteries and one portable Nikon Speedlight, (the ever dependable SB900).  I decided to shoot with a slave trigger on my camera (Nikon D700) and try to position Pete as fill in flash.  I wanted to use the ambient light that would be present from street lights and neon with the external flash used simply as a kicker light. 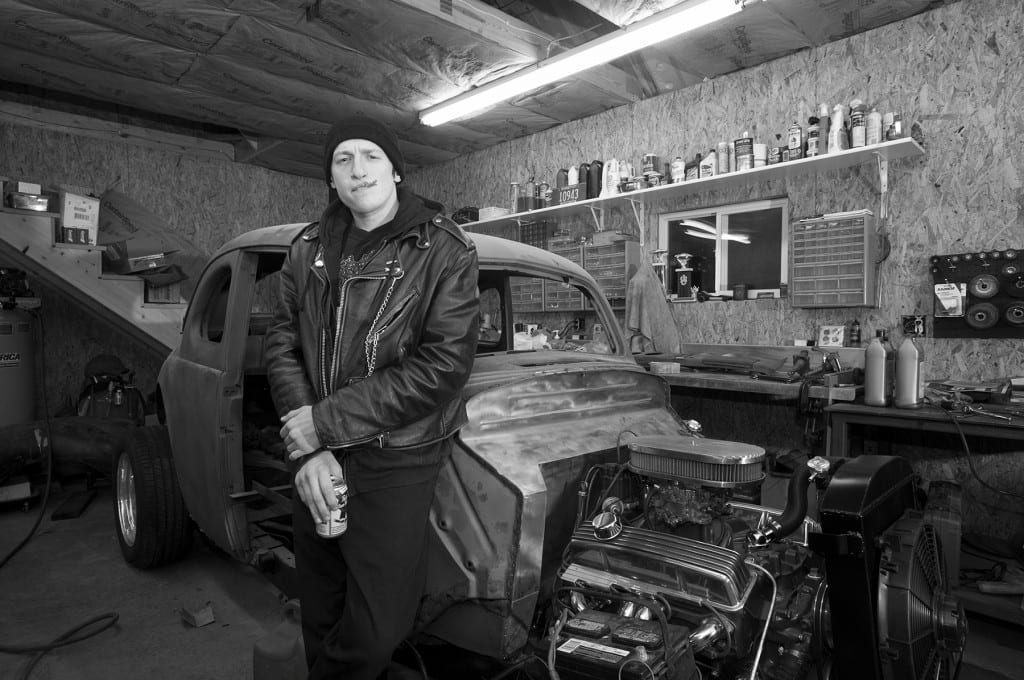 Prior to departure for the evening.

As we pulled up to Chris’s house, the president of the Rat Bastards and launch pad for the evening, I didn’t hear the familiar rumble of motorcycles, nor did I see any chrome.  The bearded guys in sunglasses were there alright, but no massive choppers!  I was set to shoot; camera with SU 800 wireless commander unit on the hot shoe, Pete with the SB 900 flash unit mounted on a mono stand, ready to move where I directed him, and all these bikers…without bikes.  As we made our way up the driveway, there they were;  dozens of bikes.  Bicycles.  These guys are going bar hopping on bicycles.  I was actually impressed and relieved that attention was paid to the hazards of drinking and driving.

The fun of this kind of photography is the exhilaration I get from the quick, from the hip, random style of shooting that is different from product photography or shoots involving models and art directors.  I shoot a lot of frames with this uncontrolled style, but the potential for happy 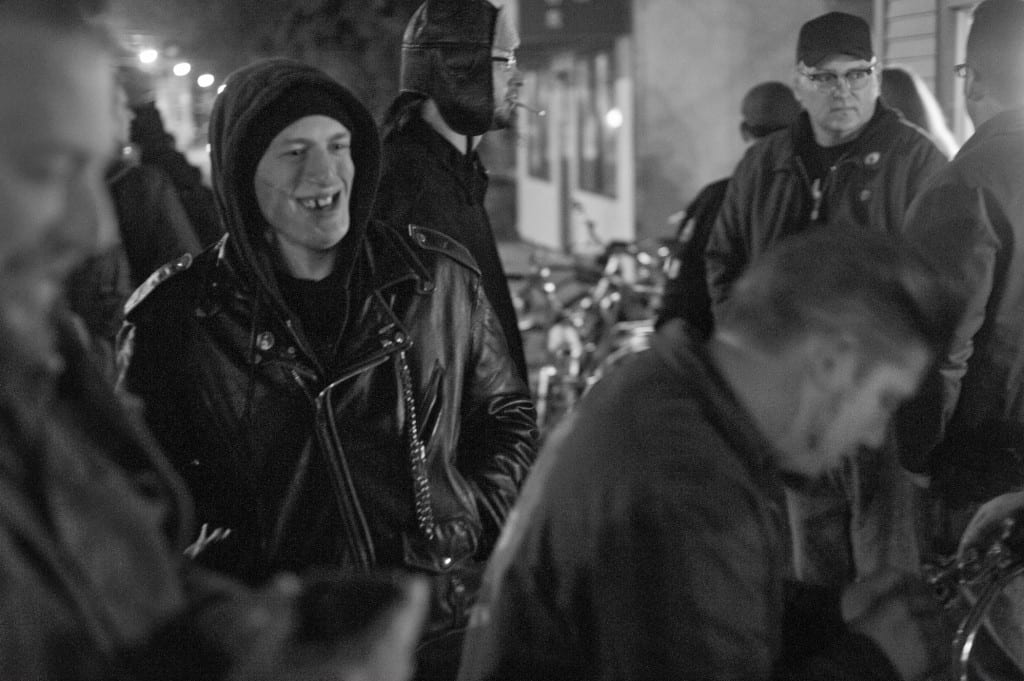 Out in the Street

accidents are great; therein lies the fun.   As the gang carried on,  Pete & I followed and by midnight everyone ended up in one of the member’s garage popping PBR’s and talking over the extremely loud music of Steppenwolf, Springsteen &  Seger among others.  I remember it being very cold outside that early spring night and as Pete & I followed the Rat Bastards and Vagabonds from bar to bar, we cherished the warmth of my mini van as we laughed at the peculiarity of the occasion.  I used Joey again at a later time as the subject of another photo shoot.   I created a scene using his truck, him and his friend, and composited it with another background.   I miss Pete, my longtime friend and photo buddy.   He contended with  a brain tumor for years, and 6 months after this photo shoot,  he passed away.  I couldn’t think of anyone else I would have rather spent this cold April night with, shooting the Rat Bastards and Vagabonds, than with Pete.   His positive, joyous quirky outlook on life connected with me through his love of photography and music.  I am glad I knew him. 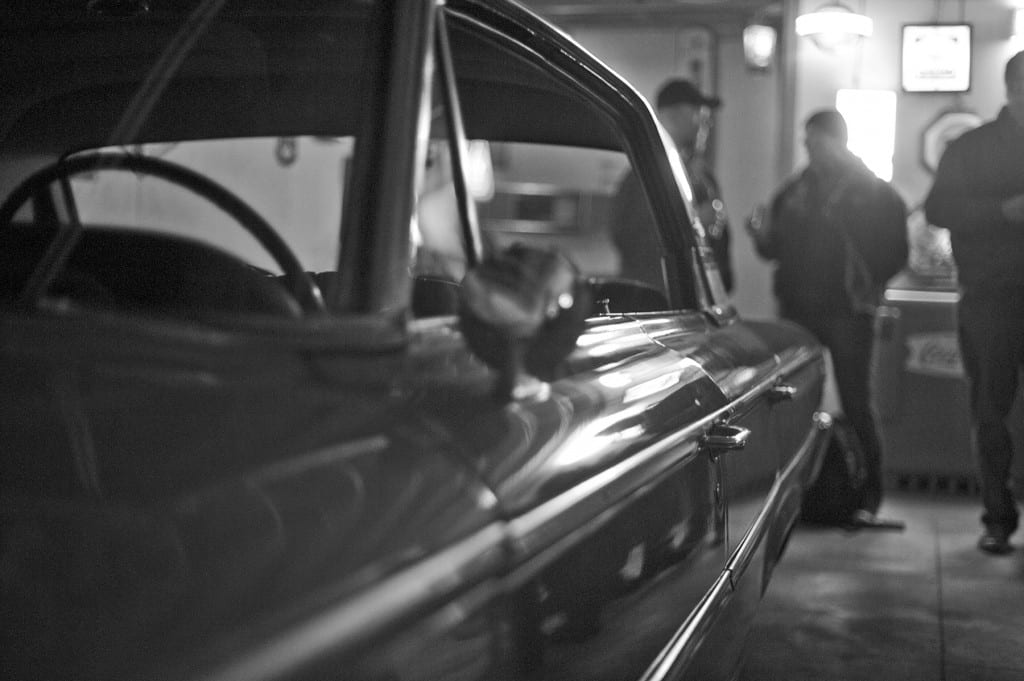 Where we ended the evening.