When I was given the opportunity to illustrate  “Doing Business”  for the Fox Cities Magazine; many ideas came to mind. The concept of business is a broad one so the challenge for me was to visualize a potential image that was interesting; and then orchestrate the lighting with the time of day/night to achieve the “look” I was after.  I knew I wanted a spars, cozy, isolated painterly feel to the final image. There is an establishment I pass almost daily that, in combination with the color of the office building, the single chair and lone employee visible to the the world through a window in a tiny work room, inspired me to capture a moment of his night shift. I first made contact with the owner, Paulie. He was an energetic short guy with a knowledge of anything automotive as well as any other Appleton business remotely connected to his.  He owned The Appleton Yellow Cab Company.  He gave me permission to photograph his business and I introduced myself to the “hero” of the anticipated photo shoot.  Ray was my man.  His work environment was old school from top to bottom. You will notice no computer, a land line phone and paper maps push pinned to the wall. (I was looking for a typewriter hidden underneath a Rolodex) I wanted to shoot at night with two variations:  an exterior looking into the office with Ray at his desk, alone and on the phone.  The other shot would be an interior of Ray doing his job as a dispatcher.   I arrived at 7PM and set up my 2 portable Nikon SB900 speedlights and aimed them at at a 45 degree angle at the office.  It was dusk and the desirable cobalt blue of the night sky was fast approaching.  The sky would be a deep blue and the office building a school bus yellow.  I warmed my 2 strobe lights with a subtle amber gel.  The overall color palette was of complimentary colors; blue and gold. My two lights were in place. Ray was at his desk answering the phone.  I had Paulie move a yellow cab up front in the foreground of the setup.  I wanted to preserve the darkness of the scene, with it’s colors and the small lit area where Ray works.  I knocked my speedlights down about a stop, zoomed them in to  a medium pool of  light on the exterior walls.  I shot in manual mode on my Nikon D800: F 5.6 @ 1/60 – 1/30th of a second, ISO 800. The cab in the foreground was lit by the overheads spilling out from Ray’s window.  My speedlights where hot shoed to Pocket Wizard radio slaves, all controlled at the camera by the Pocket Wizard AC3 control unit. This was going to be a horizontal framing, so my tripod was locked down and I was ready to shoot. The speedlights were set at TTL (through the lens) metering.  I waited till Ray answered his phone.  I was thankful it was a busy night.  My strobes popped and in perfect balance with the night sky, I could see on the LCD screen on the camera back that I had captured what I first envisioned in the early stages of formulating the scene.  All total, the location work took about 45 minutes.  I packed up, thanked Ray for ignoring me and snapped a few interior shots of him at his desk working.  I used existing light in the room for illumination. 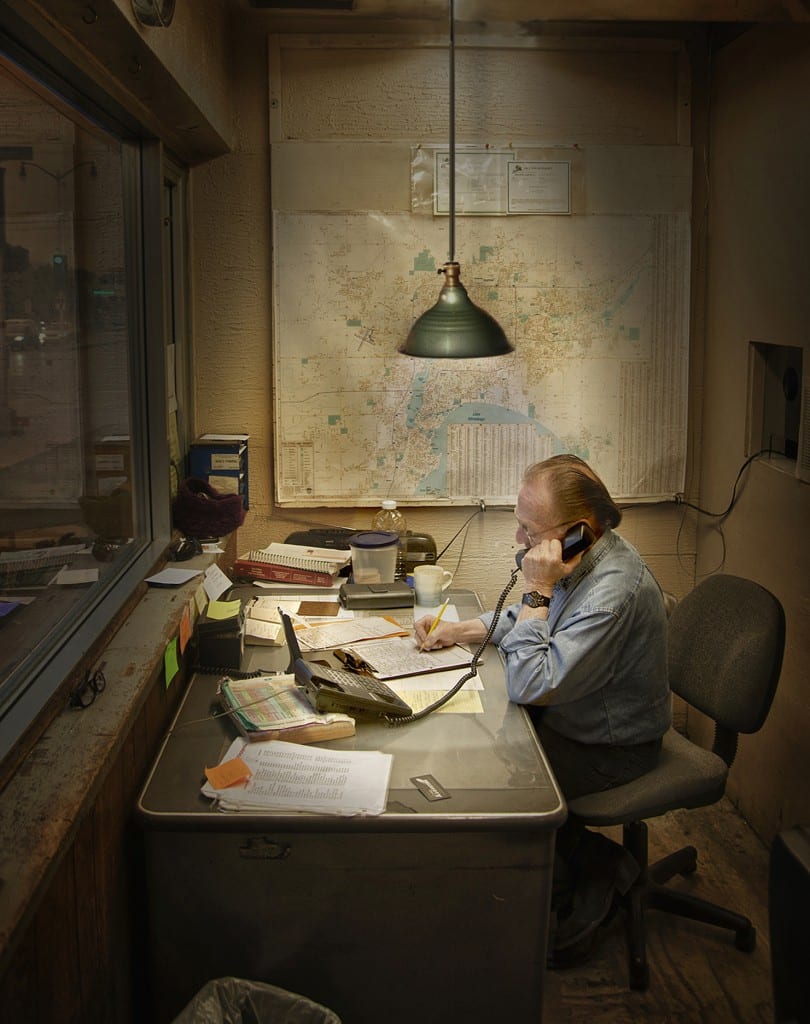 In post production, I fulfilled my promise to Paulie and “illuminated” his non working neon signage in the upper right of the photo in the exterior shot.  I did that in Adobe Photoshop with a combination of the paint brush tool and the outer glow filter. To get a cozy feel to the office interior, I cloned in a hanging task light from a previous image I had.  The only other adjustments I made was to increase the saturation, and sharpening. When I felt that I had achieved the final versions, I walked away from my monitor and returned the next day, simply to look again with fresh eyes.  I still liked it. For me, having the time to revisit the image, even an hour later, after retouching, is the best way to confirm it’s believability and visual appeal.

Isolating an instant in someone’s work day/night was an opportunity for me, to elevate a seemingly mundane, ordinary moment into a meditation on what most of our everyday lives are comprised of. 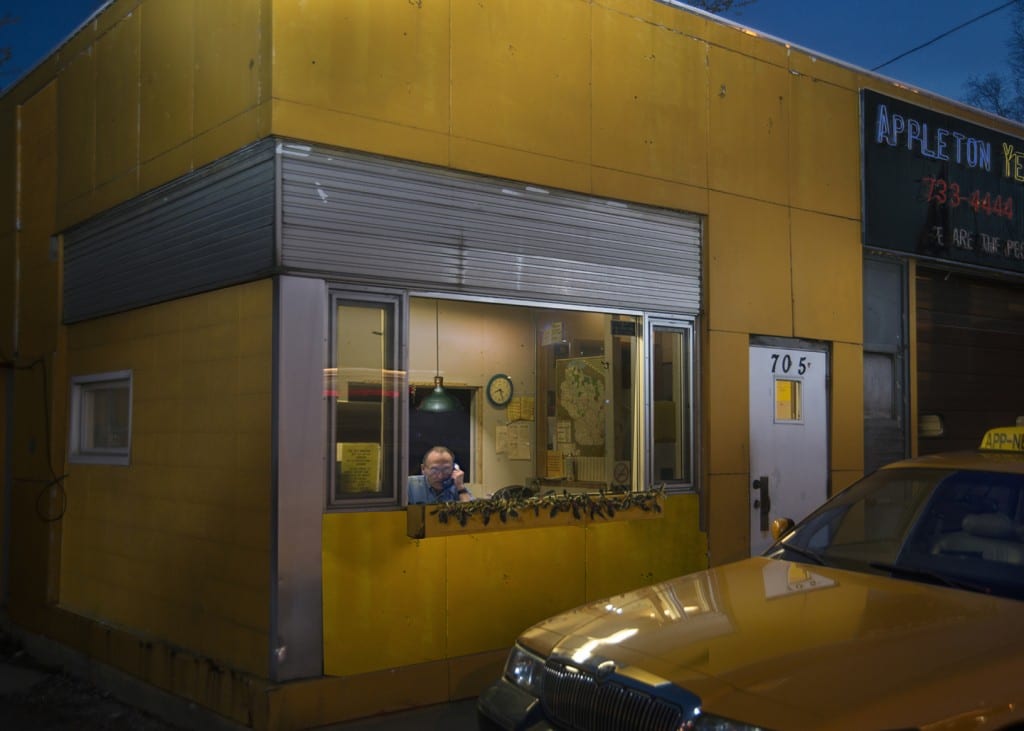