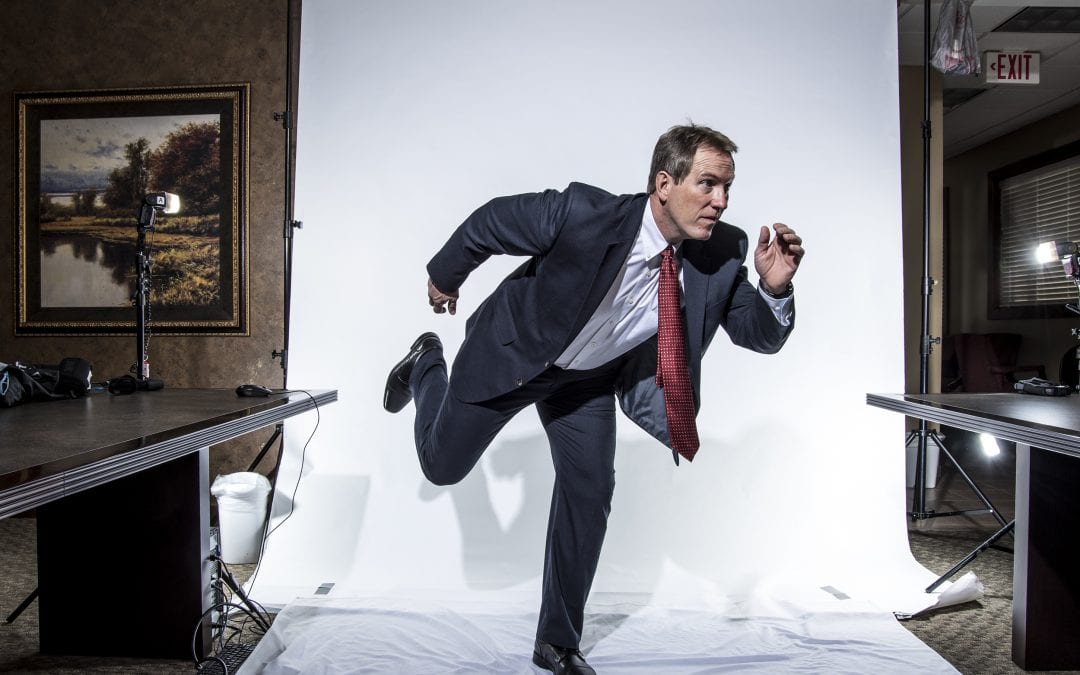 This past autumn, a client hired me to photograph people in business attire participating in track & field events.  The humor lies in the contrast between athletic endeavors and a well tailored wool suit.  When approaching projects like this, my instinct is to do it all in one shot, in other words: planned out, a sunny day on location at a highschool track with portable lighting, reflectors, etc.  This was my decision for how to do the October shoot for American National Bank.  There were 5 different images I needed to capture.   The weather was good.  I had all my 80 AA batteries fully charged for my Nikon SB900 Speedlights I was using (literally) “out in the field.”

Working quickly, I arrived in plenty of time to set up my lights for the first “event”.  My goal was to overpower the sun with my speedlights to give a dramatic look.  Shooting from a low angle and placing my lights in close to the subject achieved this. 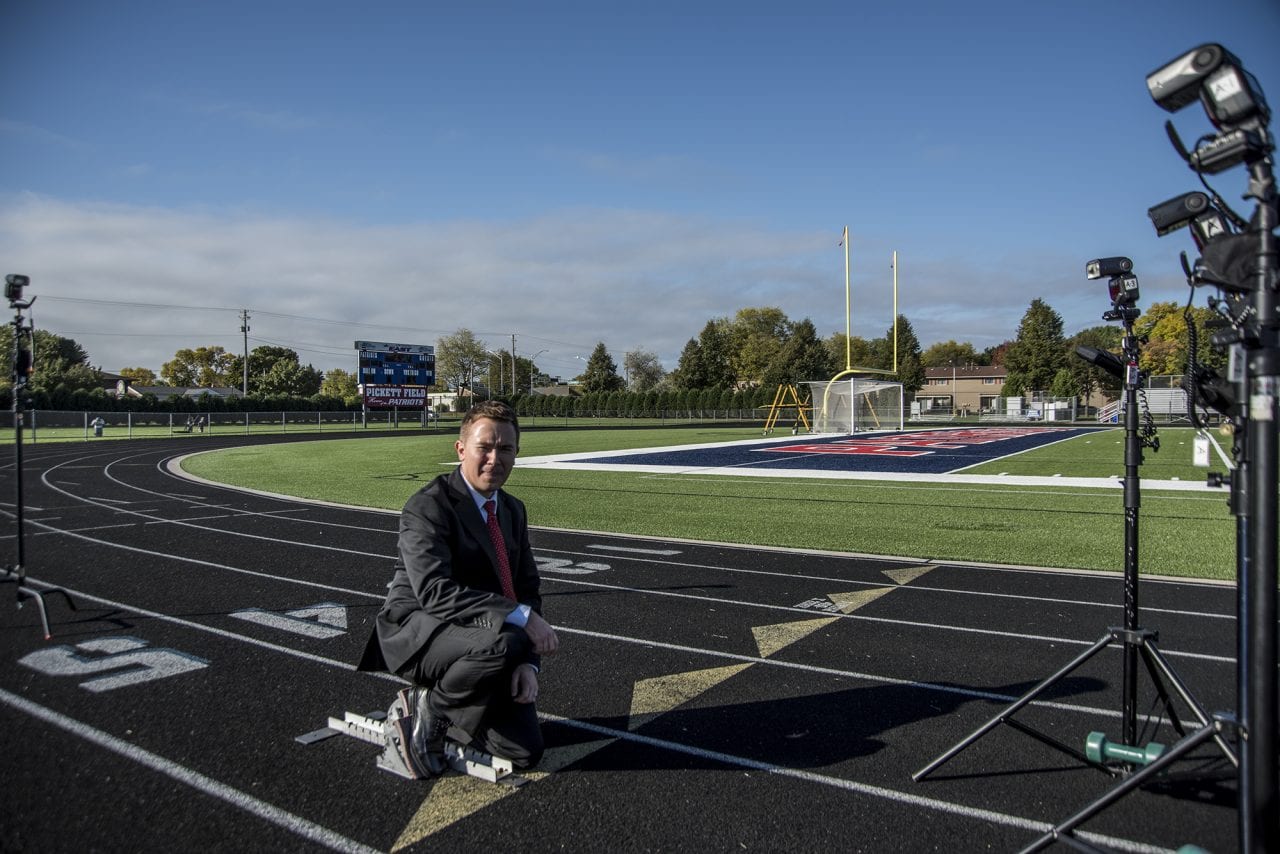 After repositioning the subject, a few times,  moving lights around and  some test shooting, The final image was looking good. 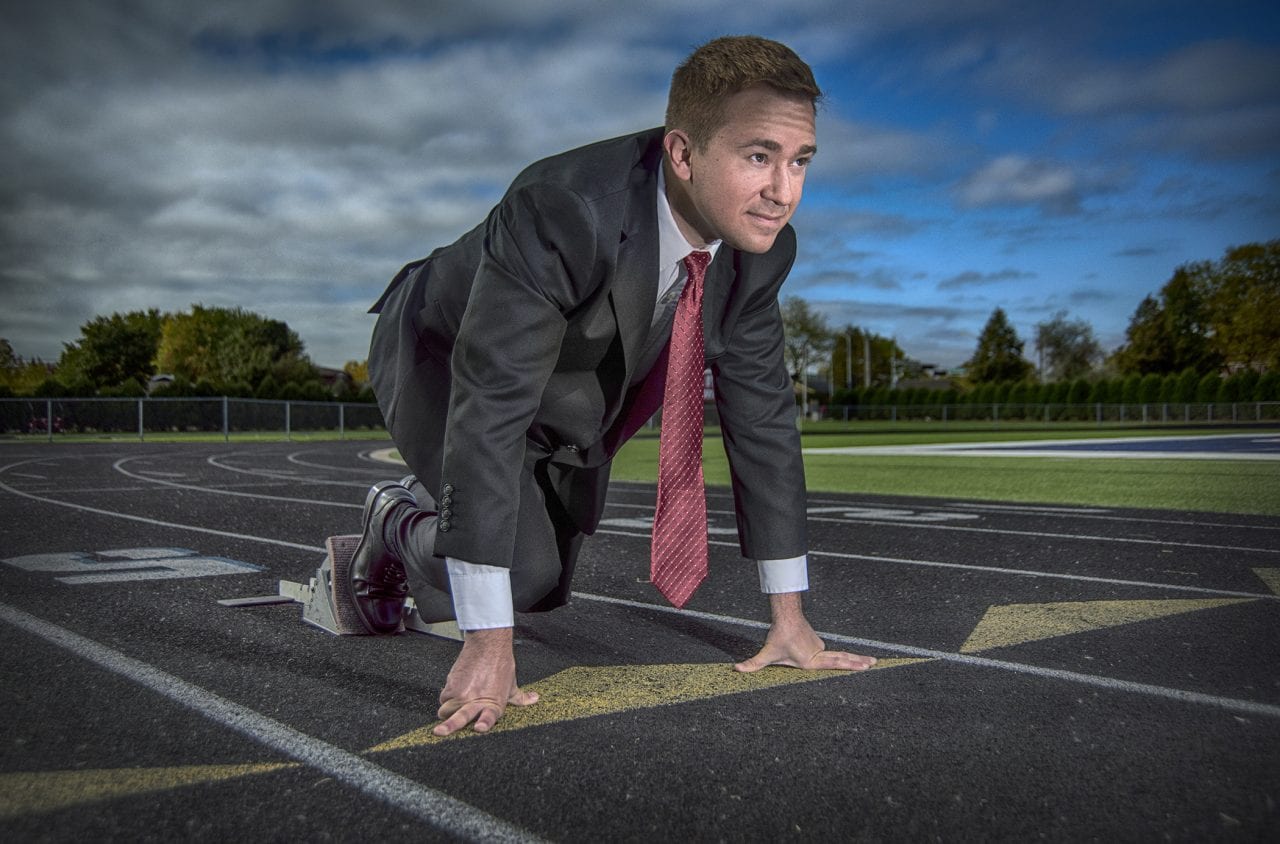 My lights were in close, in fact 2 of them were so close I had to digitally remove them from view in photoshop in post production.  This closeness of lighting is necessary to overpower the sun and darken the background in the shot.  I was shooting raw files in manual mode on my camera.    F 5.6 @ 1/4000 sec     ISO 125   The high shutter speed kept the background dark and the close lights on full manual 1/1 power blasted the subject to overpower the sun.  In post production, I applied a slight HDR filter to bring out detail in his suit.  Using this same technique for the other 4 setups, the client was happy with the final results.

Jump ahead to February.  There is snow on the ground and the temperature is 29 degrees.  The client wants 2 more for the ad campaign and we can’t wait till spring to shoot.  The solution is to composite images taken in a studio and combine them digitally with location scenes either shot by me or purchased as stock images.

Luckily, a sunny day presented itself.   I went to a local high school track to get some good background images.  The grass would need to be “greened” up in photoshop but for the most part, I got usable background views.

Next, we scheduled a “studio” shoot in the boardroom of the bank.  The boardroom had a high ceiling and enough room to shoot the individuals against a pure white backdrop to be digitally removed and placed into the background I photographed the week before at the track.

The IMPORTANT things to remember in compositing are:  camera height, sun angle and quality (clear or cloudy day) and focal length  of lens used to shoot backgrounds.

All these elements must coordinate to make the final image look real, like it was taken in one shot, on location, the way I shot the original images for the ad campaign. 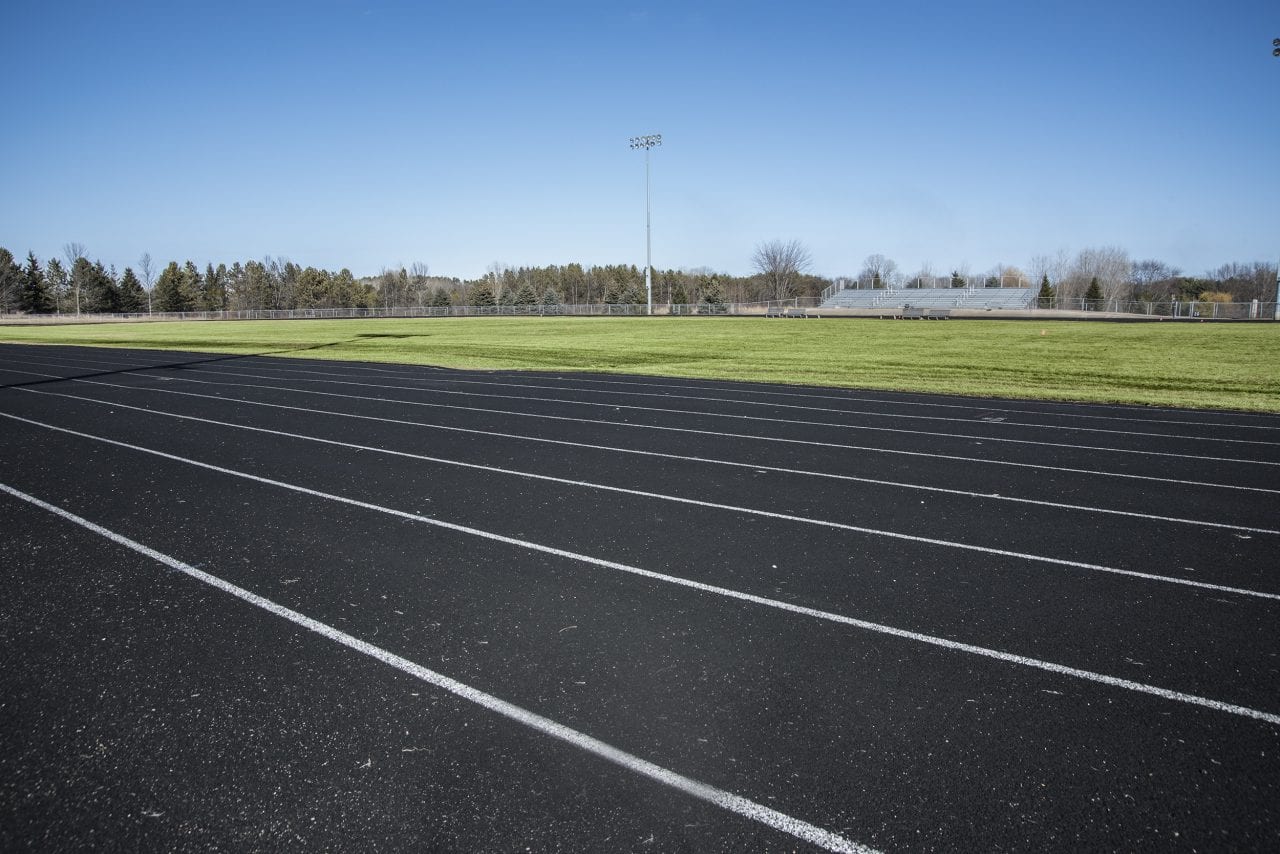 Location view I photographed on a clear day in February.  (The grass was brown and had to be greened up in photoshop) 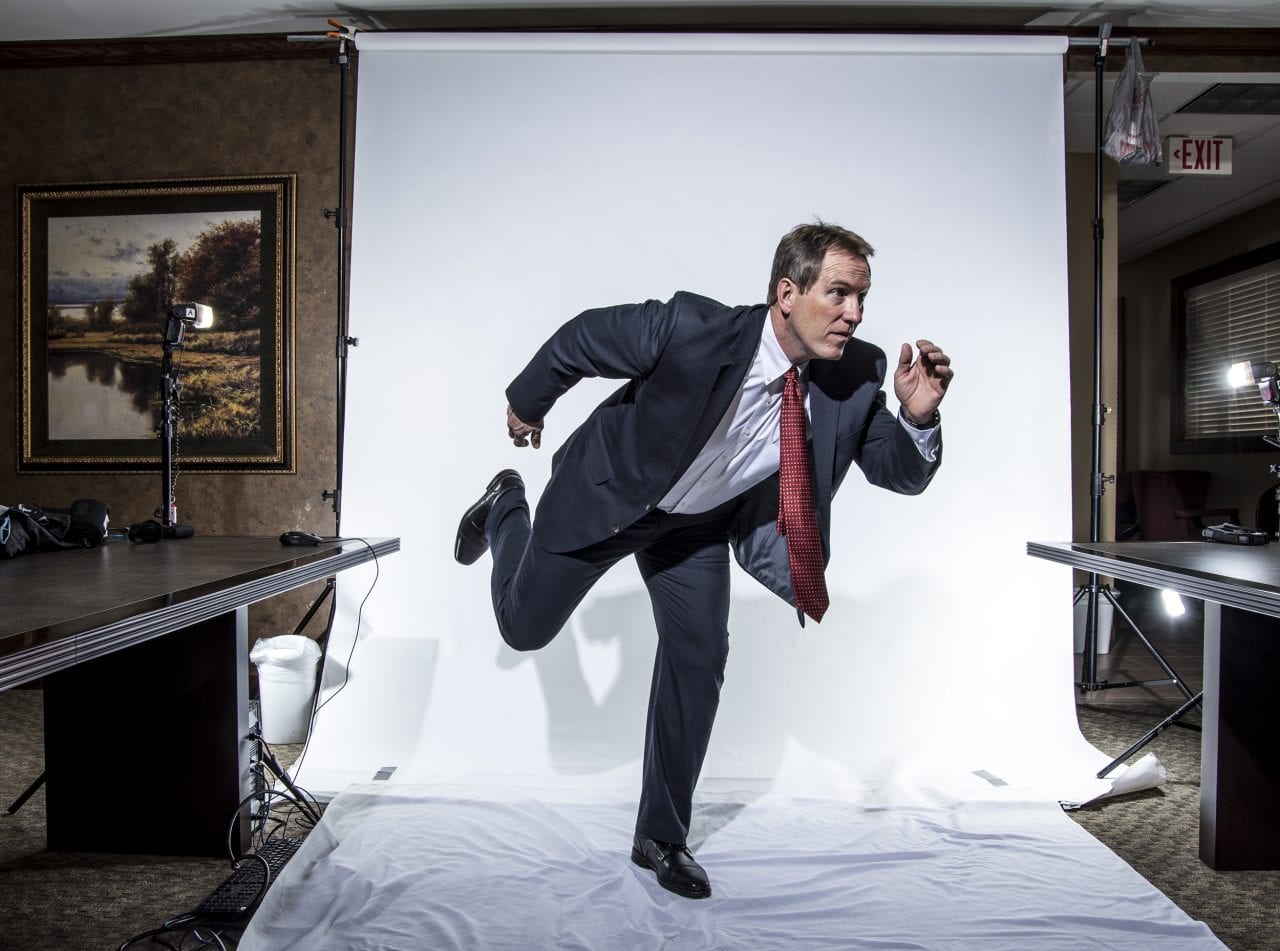 One main light acting as the sun is placed above, left of camera with a 30 degree grid spot attached.   One 4 foot softbox is camera right acting as a fill light, powered down to 1 stop less than main light. (these 2 lights were Dynalight studio strobes).  Three SB900 speedlights were aimed at background to keep it white. 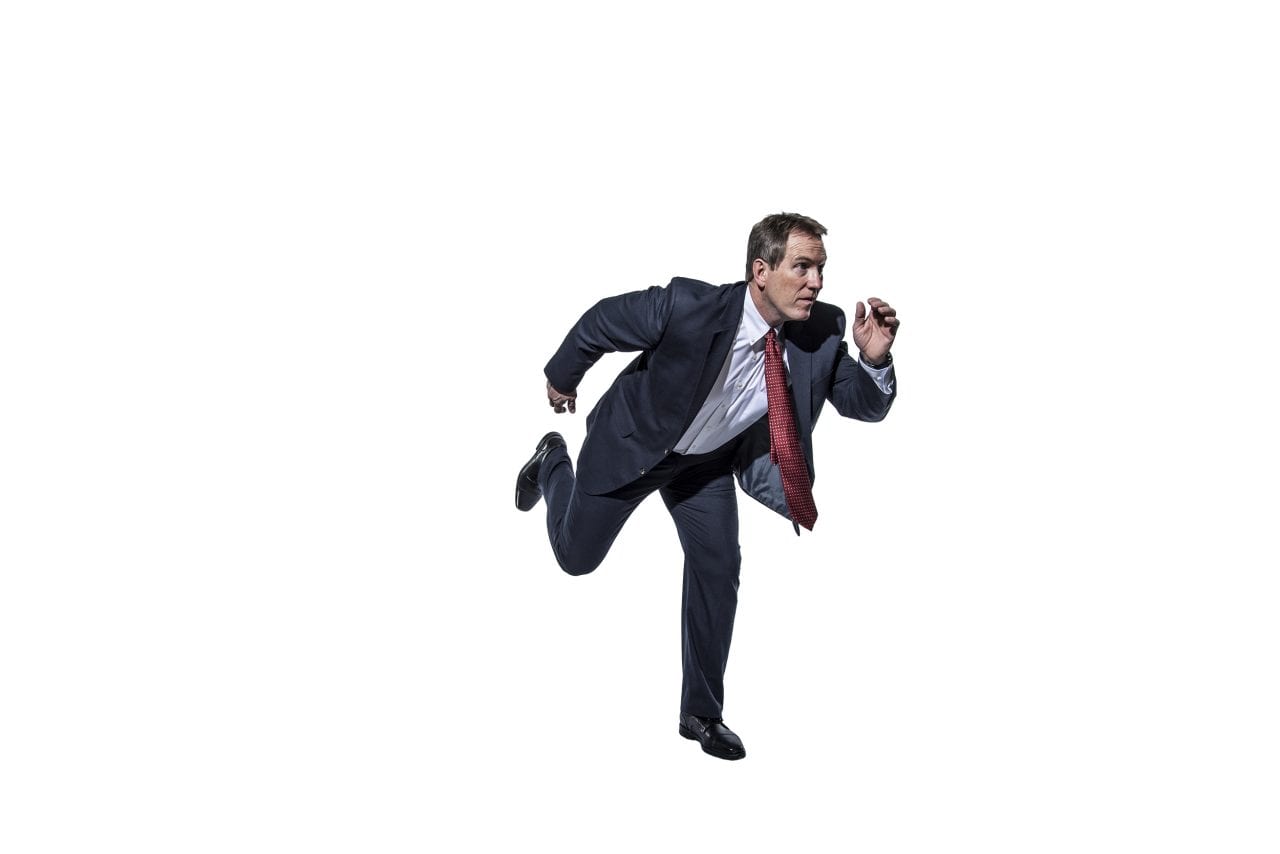 Digitally outlined and removed from background. 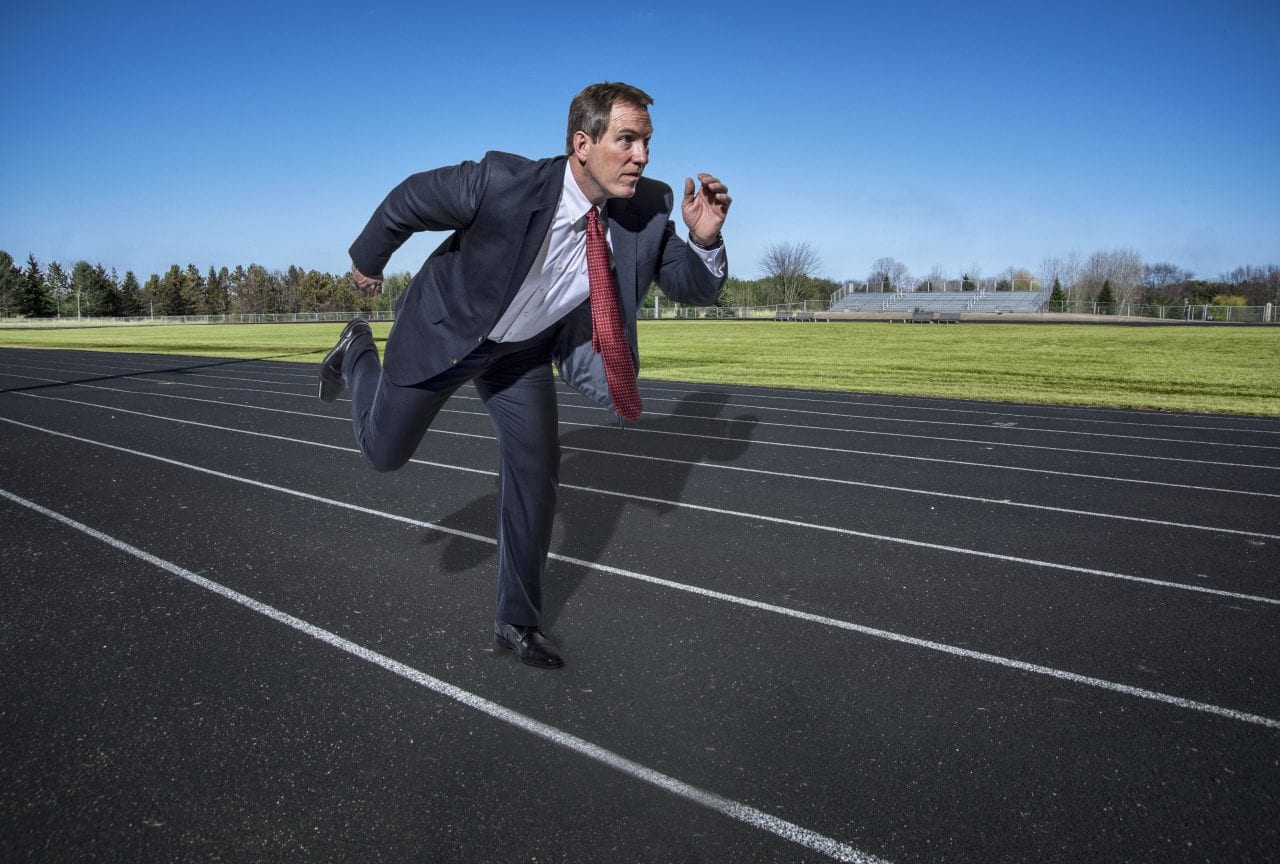 A drop shadow was added by me before submitting this version to the designer to create the ad.   He will soften the background focus a bit, crop and drop in text.  I submit this uncropped version as raw material for him to do his work without further creative digital “interpretation” from my end.

Compositing in photography is exciting and inspiring.  In this case, it was a problem solver.  I needed to create 2 images that looked consistent with what I shot earlier.  The problem was:  the weather was not conducive to making the images in one shot, outdoors. The solution was:  Compositing- 2 shots combined in post production to create a final, realistic image to send to the designer to create the ad.